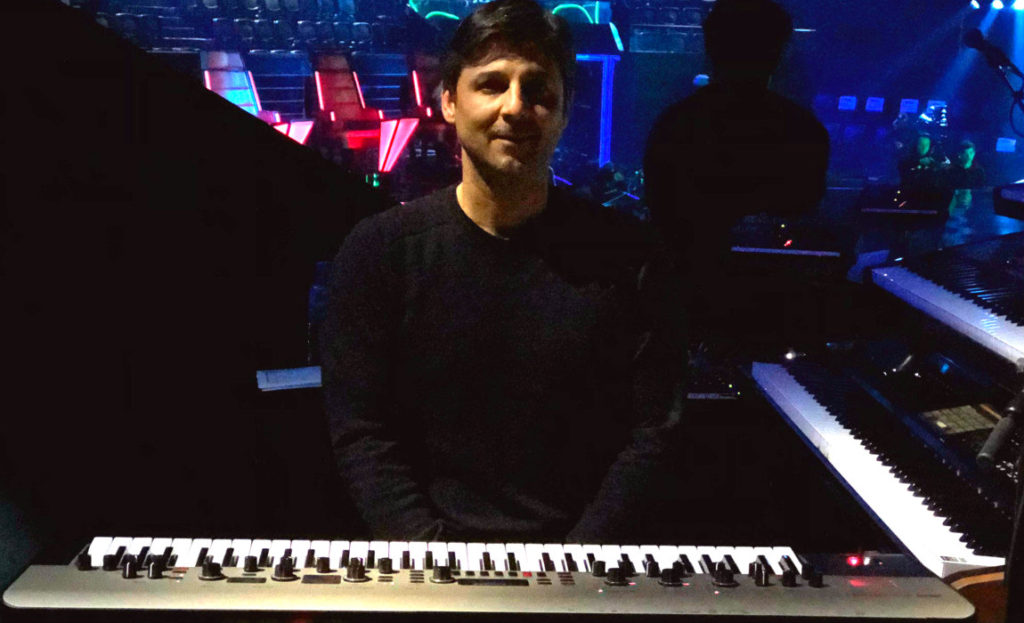 When Adam Sofo is not working on ‘The Voice’ he works for the multi-award winning bespoke music studio ‘The DA’s Office’ as a Creative Director and Composer for film, television, and games as well as the Musical Director and Keyboardist for Ministry of Sound.

So yes, he’s a busy guy but we were fortunate enough to catch up with him to ask about his role in The Voice, and to what it’s like to produce sound tracks for TV & Film.

With all these projects on the go, how do you keep your sound rig together?

Well on “The Voice” I’m using the KORG Kronos 2 and KingKorg. They’re my go-to keyboards. I really enjoy using them, I do all of my sound design on them. I’ve particularly been enjoying using the King Korg this season, the analogue sounds are fat and warm. That keyboard seems to be featuring more and more on the show because it’s just so easy to use. The pre-sets sound great with the default settings, I don’t even need to tweak them too much. If anything, I just dial in the FX, and they sound really gorgeous. For “Ministry of Sound” shows I’m using the same Korg setup.

Can you take us through the process of rearranging the tunes for the contestants on “The Voice”?

Basically, the music needs to be condensed into a certain time frame for each portion of the show. That’s the tricky bit, getting it into a 90 second or a 2 minute version. We’ll get a cut of that and if it needs programming, for example strings, or additional synths or drums, I’ll do the programming and sound design. We’ll then go into the studio and record them for the artist who eventually get a copy to reference. We’ll then rehearse it for the show.

Who determines that arrangement? The judges or you guys?

There’s a whole process involving the music team. Obviously, the coaches have a say before it goes into the arrangement process. It depends on which part of the show we’re in and is determined by a few different people. I would think the artists have input as well.

Can you tell us a bit about the process of doing sound for films and shoes through “The DA Office”?

Most of the time we try to get writing on the show straight away to give them a bunch of tracks up front. Once we establish a brief, which sometimes involves me citing references, for example if they want an orchestral piece blended with a bit of pop, or modern organic sounds I’ll go away and write something to concrete that brief in. That’s a good starting point, and as they start filming, we’ll get some rough cuts or scenes, then we tweak the brief further. The footage dictates the vibe of the show, and the music brings the emotion. The reason why we’re really good at what we do, is because we’re all about branding a show with its own voice or unique sound.

Tell us some of the gear you have in your studio at ‘The DA’s Office”?

I obviously use my KORG Kronos as my go-to and as my midi controller, and a lot of the internal sounds. I’m also using Logic and NI KONTAKT along with a whole bunch of third-party libraries. I like to play as much guitar and bass as possible because I try to make it as ‘live’ where possible so I’m playing as much as I can in the tracks and then blending that with samples.

You website BIO tell us you have worked with Silverchair. Can you tell us a little about that?

I joined the ‘Chair for their world tour in 2007. We toured the world playing all of the songs from their “Diorama” and “Young Modern” Albums. I was keys player in that band for a couple of years which was absolutely amazing.

I also developed an intuitive way of playing the Van Dyke Parks string arrangements on the keyboard using the key switches and playing back the samples live, but that’s a conversation for another day!

Are you playing with any other bands or artists?

Not really much of this at the moment, I’m concentrating more on the TV side of things. I’m getting more roles in the capacity of musical director, and doing more ‘Ministry of Sound’ style projects which has taken me in a different direction – I’m enjoying bringing all my skill sets together in the role of MD, it’s challenging.

Do you have any suggestions to young, up and comers looking to get into the sound design industry for film and TV?

Work hard. A lot of musicians are scared of losing their jobs, as there isn’t a lot around in Australia at the moment. When people contact me through my website, or call me impromptu they usually ask me for work or ask me how I get the gigs I get; I don’t have anything to hide, I share everything with them.

It’s important for the next generation to grow into top level professionals and it’s important that my generation of experienced professionals teach the young. We can’t lose that. If kids are willing to work hard and they come to me, I’ll take them on and mentor them and try to help them as much as possible. I don’t have any insecurities in my profession. One day I’ll be too old and they’ll take over,

and I want the standard to be high. Another way I like to think about it is, if somebody gets my gig, it means I’m not working hard enough. It keeps me on my toes.

I always say to the young kids, “I want you to be really good and it keeps me on my toes knowing that I’m giving you all of this knowledge”, because I just have to keep getting better at what I do. You have to both give and receive, that’s how the universe works.

Thanks Adam, Is there anything else you want to add?

I’d love an opportunity to get involved more with KORG R&D. I’m very technical and using all of their keyboards – there are a bunch of things I’d like to see developed in their synths. Just intuitive and functional things. That really interests me. It’s partly why I love using this gear, to help develop and improve it.