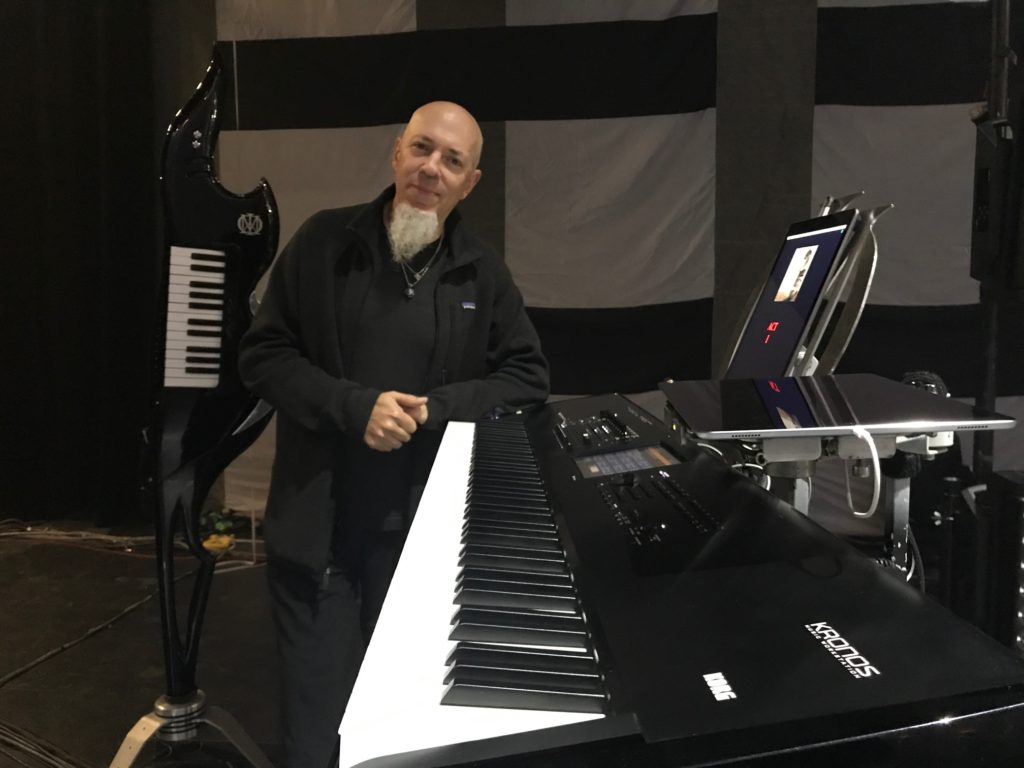 The Wizard returns to OZ!

Dream Theater have just wrapped up the hotly anticipated (albeit fairly brief) Australian leg of their ‘Images, Words & Beyond’ World Tour at the Melbourne Palais Theatre, which packed in 3 hours of eclectic musical madness and wizardry into two sets.

The first set was a mix of back catalog tracks, particularly showcasing their recently released double disc concept album ‘The Astonishing.’ Their second set saw them perform their classic 1992 album ‘Images and Words’  in its entirety, commemorating 25 years since its release. Plus of course an encore. (in the case of the Melbourne show, this was their 25 minute epic ‘A Change of Seasons’).

Tristan Malloch caught up with their legendary keys player Jordan Rudess after soundcheck at the Palais Theatre in Melbourne to figure out how he works his magic.

“99% of his live performance is done on the Korg Kronos” according to Jordan’s keyboard tech Keith Wechsler, referring to Jordan’s stage rig which is amazingly simple given the complexity of the material at hand.

The Korg Kronos has long served as Jordan’s main workhorse for both performance and recording, whether he needs acoustic pianos, orchestral combis or complex layered synthetic textures. Even with all the power under the Kronos’ hood, Keith tells me they push it hard with some seriously ambitious programming, but it’s always up to the task.

Jordan is required to trigger many of the samples used throughout the show which are usually mapped to individual keys on the Kronos. His Kronos for this tour is mounted on a cleverly designed custom metal stand which allows the keyboard to spin a full 360 degrees. The pedalboard also rotates with the Kronos for full playability from any position.

Mounted atop his Kronos is an iPad running the ‘GeoShred’ app co-developed by Jordan’s own software company – Wizdom Music.. The fretboard style interface and physical modelling sound engine allow for both creative and realistic guitar style performances.

Opposite from the Kronos is the ROLI Seaboard RISE 49 controller. Jordan has for many years liked to embellish his keyboard rig with instruments that allow for more nuanced and expressive articulation such as a Lap Steel, or Haken Continuum.

The ROLI Seaboard fills this role perfectly with 5 dimensions of expression, and MPE technology which transmits each note on individual MIDI channels so that each finger’s 5 dimensional gestures are tracked independently.

The Seaboard is used prominently on the ‘Images, Words & Beyond’ tour, notably for the sensual soprano saxophone solo that concludes their song ‘Another Day’ – a part originally performed in 1992 by Jay Beckenstein of Spyro Gyra.

The ROLI Seaboard is connected via USB to a laptop backstage operated by Keith Wechsler. Apple’s Mainstage software hosts ROLI’s Equator software which is used for many of the leads and textural sounds, as well as SWAM engine virtual saxophones for the aforementioned solo.[/vc_column_text][vc_column_text]The final eye catching component of Jordan’s stage rig is the Zen Riffer keytar which stands proudly at the rear. A built in wireless MIDI transmitter communicates with an offstage rack which hosts a pair of classic Roland V-Synth XT modules.