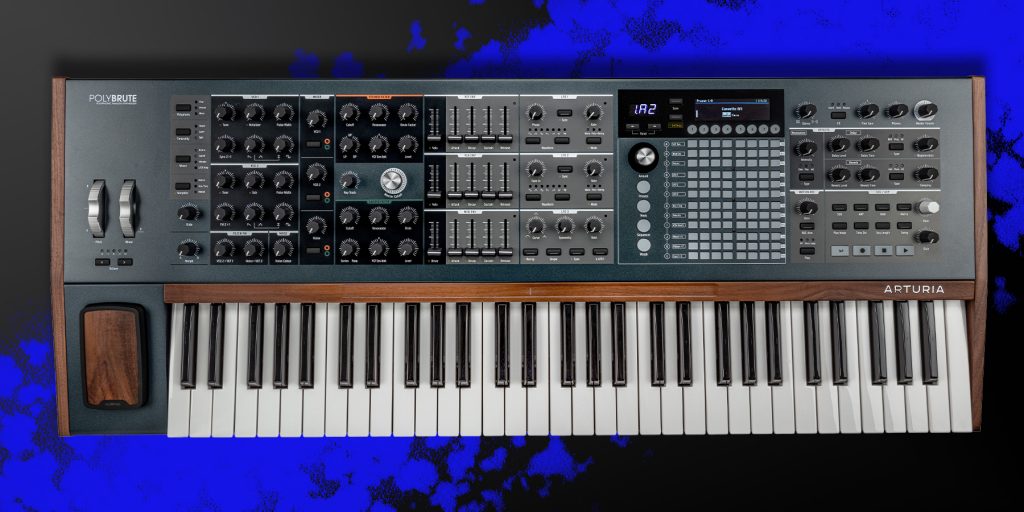 After years of speculation from the greater global synth community along with prayers to their respective sub-denominational patron saints, Arturia have lifted the veil off their flagship polyphonic behemoth: PolyBrute. Some aspects are just as you may expect from such an addition to Arturia’s synth lineup, but it also packs in plenty of truly surprising extras and innovations. 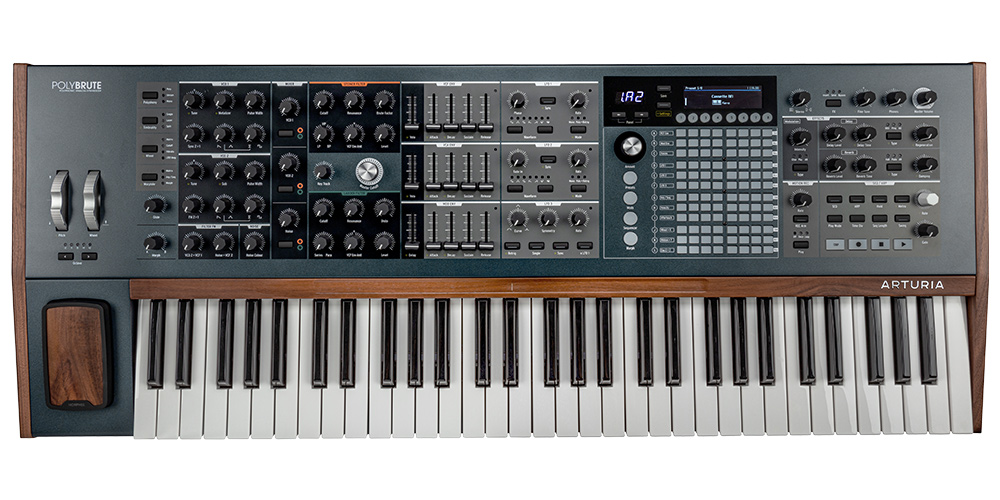 Keep in mind we’re talking 6 voices of polyphony here and at two oscillators per-voice, we’ll gladly look past the omission of a third traditional (non-Brute) oscillator as seen on the monophonic MatrixBrute. This is the first time we’ve seen these Brute oscillators used in anything other than a mono/paraphonic context so we’re talking some serious sonic firepower right from the outset. Buttons to the left of the oscillators cycle between various voice modes i.e. poly/mono/unison and optionally activate a second timbre for 2 x 3-voice layer/split performances.

The Brute oscillators have seen a notable change from their previous appearances in Arturia synths, this time with one knob to blend between Saw and Triangle waves, and another to mix in a pulse wave. Oscillator 1 features the familiar metallizer and pulse width modifiers as well as a sync option, whereas oscillator 2 sacrifices the metallizer for a sub-oscillator and facilitates oscillator 1 frequency modulation.

The Matrix patch bay operates similarly to that of the MatrixBrute with modulation routings, sequencing and patch selection all possible, albeit via a smaller 12 x 8 layout. It also facilitates a mysterious fourth function called morph, but more on that later. Above the patch bay is an all-new fairly large OLED display capable of some fancy and no doubt useful visual feedback, particularly with regards to that previously mentioned morph function.

The next key point of distinction lies in the controller department with the addition of 2 gestural input devices. To the left of the keyboard where you may expect to find a pitch and mod wheels is a wooden surface known as the Morphée pad (don’t worry, those pitch and mod wheels are still present, instead located directly above). No this isn’t a QI wireless phone charger. Morphée pad is a 3 dimensional controller which responds expressively to an array of finger gestures such as tapping and sliding. Furthermore, a ribbon controller blends neatly into the wooden panel above the keyboard for further gestural control. Either controller can be assigned to a variety of parameters and all this is in addition to the same great feeling keybed from the MatrixBrute, this time with 61 keys. 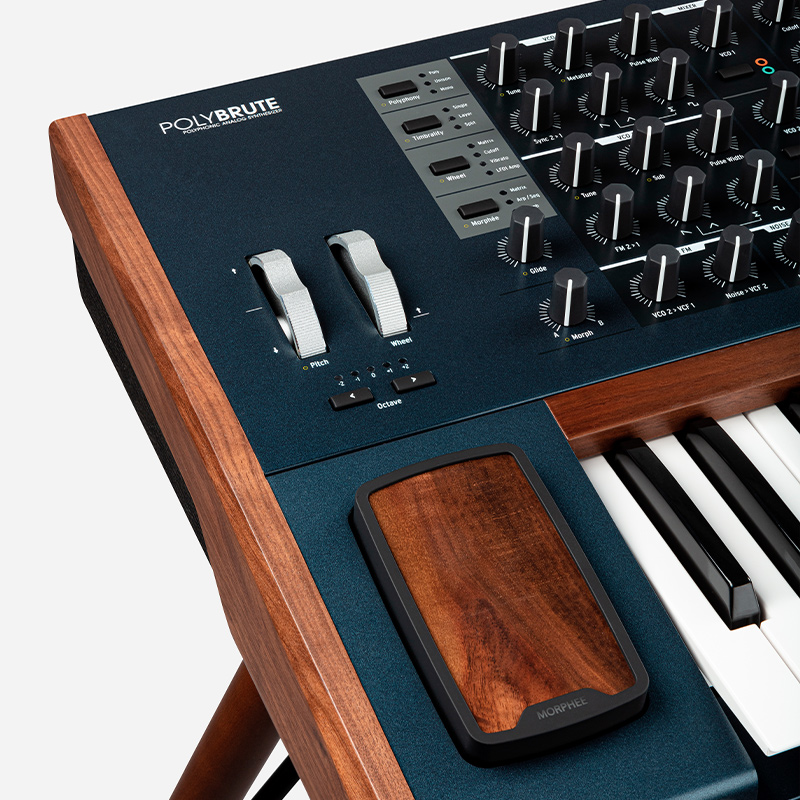 Arguably PolyBrute’s biggest innovation, however, is a function known as Morphing. Each preset has two variations of parameter settings. Via some as yet undisclosed form of sonic voodoo, PolyBrute can seamlessly blend between these two states by morphing from one arrangement of parameters to another. This is like macros where one knob can manipulate multiple parameters simultaneously, but taken to a crazy extreme and like nothing we’ve seen on an analog synth before, where a patch can seamlessly evolve into a completely different patch.

This is, of course, great for smooth patch changes or extreme modulation, but there will no doubt be interesting results achieved by subtly blending in the character of completely different type of sound, either in one static position or as a continuous or rhythmic movement. Sounds amazing and we can’t wait to try this for ourselves as it packs the potential to blow more minds than Michael Jackson’s 1991 music video for Black and White, not to mention the ensuing barrage of 90s home computer photo transformation suites.

One thing’s for sure. Between the multiple gestural controllers and morphing capabilities (to say nothing of its extensive sound generational prowess), PolyBrute is one expressive polysynth. It’s also a step up from its Brute brethren in the software department with an accompanying plugin/editor for DAW integration. 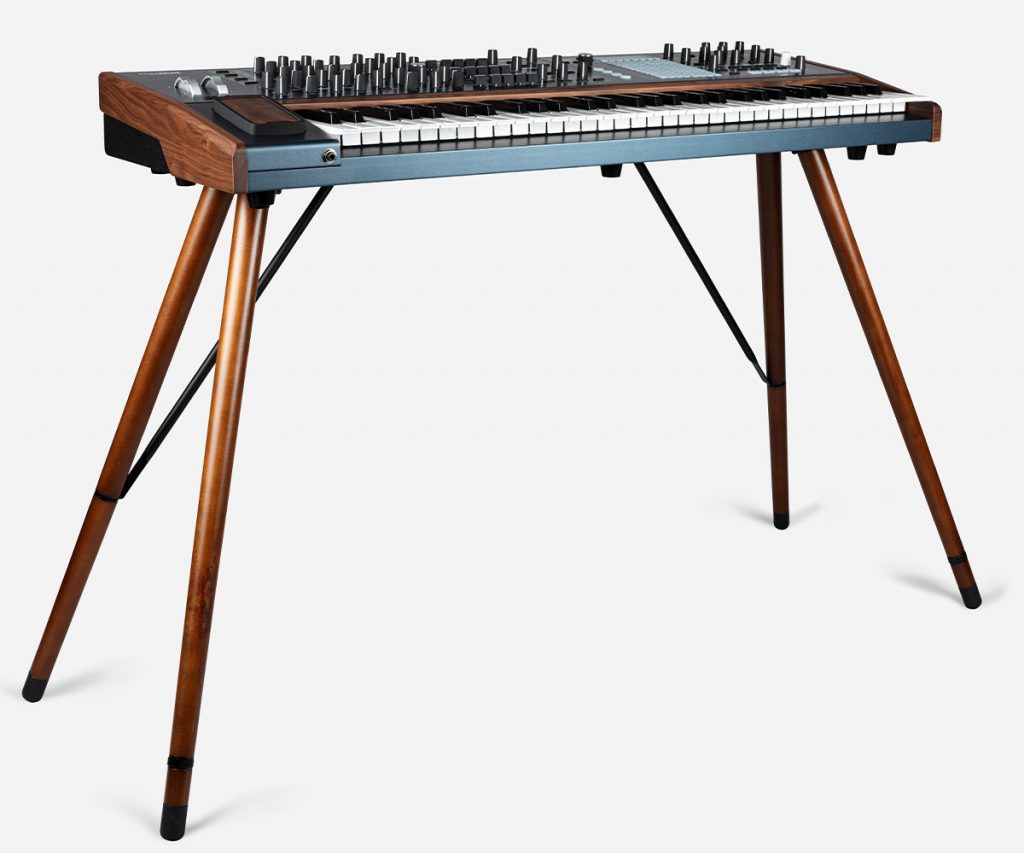 It’s also worth noting that PolyBrute is compatible with those tidy wooden legs we saw recently for the KeyLab 88. All in all, PolyBrute looks to be not only a great performance synth for live use with its 61 keys and morphing capabilities but also a very compelling option for studio work. Then there’s the digital effects section, 64 step sequencer, motion recorder….we could go on forever baby but here’s the extended feature list from Arturia:

PolyBrute is expected to be available in Australia in November.

Note: Australians, please be aware that US prices do not include shipping, GST or customs duties. Be sure to check exchange rates and associated fees with your chosen payment portal when buying in foreign currency – It’s quite often better to buy local