Audio Interfaces, Where to Start: a Beginners Guide 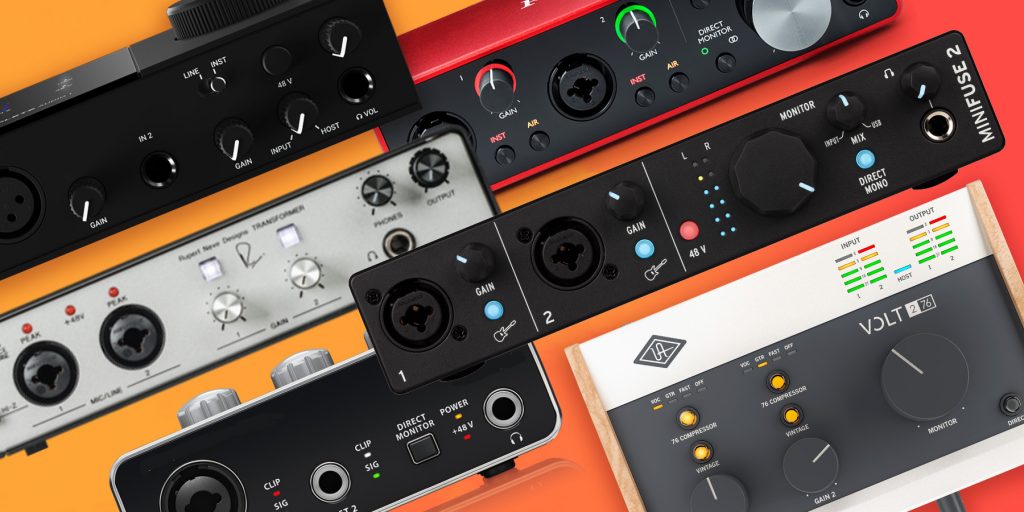 Buying an interface is a daunting and exhausting process, there are so many audio interfaces to consider all at different prices. Also, an overly complicated interface with a varied number of features could become a bit of a head-scratcher. For a beginner it’s just a matter of plugging it in and start making some banging beats, strum a guitar or sing that tune. This guide will help to relieve the pressure of buying that first interface and assist by breaking down the bare basics and hopefully get you started. With the arrival of UBS-3, USB-C and Thunderbolt in recent years, selecting the right connection to a personal computer or mobile device is the first consideration. We’ll go through choosing how many input and outputs you might need and take a quick look at those MIDI connections found on most audio interfaces and how they can be used.

When selecting the right interface identifying the type of connection to the computer and/or mobile device will be the first thing to consider; will it be USB, USB-C or thunderbolt? Typically on mobile devices, such as an iPad or iPhone, the connection is made via the charging port with either an adaptor or USB-C. 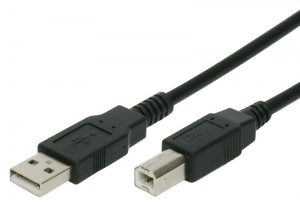 A commonly used connection on laptops and PC’s is standard USB. There are devices that have USB-3 connections which are the same as standard USB. The main differences between USB and USB-3 are how fast information is passed between the devices and the colour of the ports. 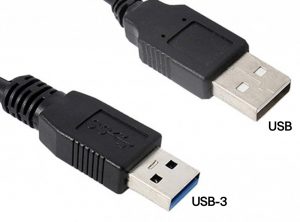 Standard USBs usually have a plastic white part at one end of the cable, whilst the USB-3 is blue. If your computer only has USB-3 ports and the USB interface doesn’t state if it’s compatible with USB-3 ports, it’ll work as USB-3 ports work the same way as a standard USB device, this is what manufacturers will refer to as “backward compatibility”.

More recently computers are starting to move away from standard USB and are implementing USB-C, which are commonly used on mobile devices. Manufacturers are moving towards using the same connector across all devices. In theory, this would allow the use of an interface on both computers and mobile devices.

USB-C has a completely different port to standard USB and won’t fit into their respective ports as the connectors are different shapes. If your computer or mobile device doesn’t have a USB-C port, there are adapters and cables that give you the ability to use USB-C and USB audio interfaces. You’ll need to check with the manufacturer if your interface will work via these types of adapters. It might seem like a simple thing to use an adapter, but when it comes to audio there’s a bit of digital data being transferred through these ports, so always check with the manufacturer of your audio interface, computer, mobile device and software that everything will place nicely together. iPhones and iPads have Lighting ports and there are adaptors for Lighting to USB-C which would allow a USB-C interface to work with these devices. You’ll also be able to find Lighting to USB and Lighting to Thunderbolt. The iPad Pro, 2021 iPad Mini and iPad Air come standard with USB-C, therefore connecting a USB audio interface should be fairly straightforward.

Thunderbolt connections are a standard that is used on most Apple computers along with USB and USB-3.
Apple introduced Thunderbolt with the ability to push a large amount of data at fast speeds.

Thunderbolt 1 was predominantly used for external computer monitors, Thunderbolt 2 and 3 evolved to other devices like audio interfaces.

They may look the same but the protocols can be different between manufacturers.

Choosing the Number of Inputs and Outputs

Typically, on most audio interfaces the main audio outputs can be found on the back of the unit. Depending on the type of interface the physical analogue audio outputs come in different types of cables, including:

Connecting the audio interface to speakers can be made via the labelled main output, also known as monitor out or analogue out, depending on the manufacturer.

Commonly the connection made from the audio interface to speakers is through a line connection or XLR. The next section goes into more detail regarding the types of connections.

Audio interfaces with multiple outputs can be utilised in settings where a user wants to connect the second set of speakers or send audio to external devices such as external audio effects units. If you were to purchase an audio interface with multiple outputs and don’t have any markings indicating the main or monitor outputs, it is recommended to connect the speakers to the first output pair, such as Analogue Output 1 & 2, as these are commonly used as the main outputs when connecting to a pair of speakers.

Choosing the right number of inputs is dependent on the number of instruments or microphones you want to record simultaneously. For most people starting out, they might have a microphone or a guitar and would only require a single input, although if you wanted to record vocals and the guitar at the same time you would need 2 inputs. If your home studio set-up had a little more gear in the way of keyboards, synths, drum machines and effects units, then you’d be looking at possibly more inputs. Important here to think about how you record now and how you might record in the future. Always check with the manufacturer as they tend to provide lots of good info with suggested set-up configurations with their interfaces.

These days we are spoilt for choice when it comes to affordable audio interfaces. If you’re just starting out we recommend the recently announced Universal Audio Volt series and Arturia MiniFuse are great value along with the Tascam US HR series, Focusrite Solo and Scarlett series, and Native Instruments Komplete Audio series, to name a few.

Today there are many ways to connect your favourite external gear to your interface. Audio interfaces can have up to 256 inputs and 64 outputs, yet they only have 8 physical inputs and 2 physical outputs. It can get rather complicated and pricey when you start talking about more than 8 physical inputs/outputs, but that’s best left for another time!

Connecting an instrument or microphone to an audio interface is as simple as plugging the instrument cable into the line connection or the microphone cable into the XLR Connection. Instrument cables are also be referred to as TS or TRS which have a different number of rings around the tips on the cable. These rings indicate the type of connection being made to the audio interface: 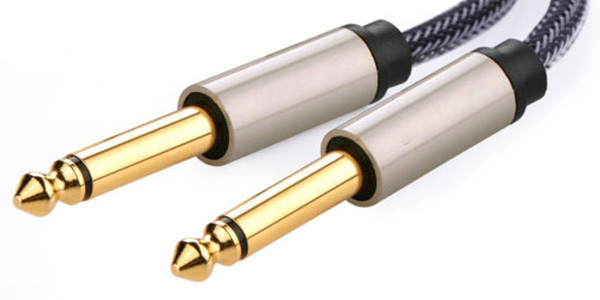 One ring around the tip (TS) indicates an unbalanced signal, meaning one (mono) audio signal is running through the cable, such as a guitar or line-level instrument commonly found on most keyboards, synths or drum machines. You would need 2x TS cables to give you a stereo signal. Two rings around the tip (TRS) indicates a balanced signal, meaning two audio signals are running through the cable. These cables are the same size as the TS unbalanced cables, although they are more commonly used with more professional orientated gear. Headphones use TRS cables, so you don’t have to plug in 2 cables to hear the stereo field! Balanced (TRS) cables can work in unbalanced applications, but it is a waste if you don’t have balanced gear, recommended to use them only if you have balanced inputs/outputs on your device/instrument.! As always check your technical specifications.

Microphones use a different cable altogether, these are called XLR cables and would require an XLR input on your interface. Microphone cables have 2 different ends: 3 pins called the “Male” end and three holes called “Female”.

The pins on the male side would go into the microphone input of the audio interface and the female into a microphone. There are instruments that allow you to use XLR cables that offer a balanced signal, just like TRS cables. 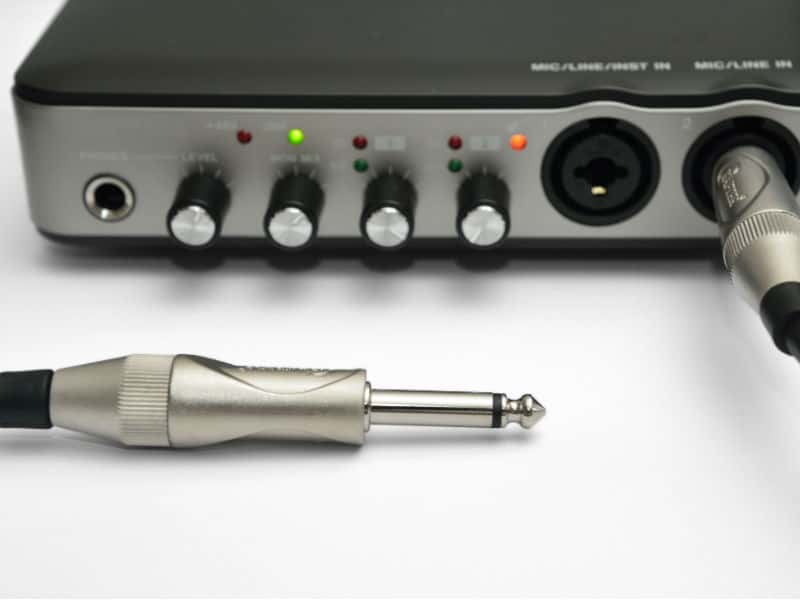 MIDI stands for Musical Instrument Digital Interface, it is a protocol that was created in the early 1980s to allow greater control across different devices digitally. MIDI transmits digital information between devices such as your computer, external instruments and controllers. MIDI transmits different types of control data, not audio as such. Traditionally MIDI is connected via a 5 pin cable although these days MIDI can be also be transmitted via USB connection.

MIDI can get complicated depending on the application and the amount of control you need. For example, using an external keyboard controller to control software synth plug-ins. Or connect an external hardware synth and sequence it via your DAW. MIDI can also be simple, such as synchronizing your DAW clock to an external drum machine. MIDI does open up a plethora of control options, especially if you want to integrate software and hardware music technologies. Music manufactures are constantly releasing new and exciting hardware with greater MIDI control. Even if creating the latest club banger isn’t your thing, synchronizing your stompbox to your DAW can all be done via MIDI, so definitely worth considering an interface with MIDI regardless of the music you’re making.

Hopefully, this provides some insight when considering your first audio interface. Ultimately, recording audio can be rather technical requiring some basic audio engineering knowledge. The good news, manufacturers understand this, and we are spoilt for choice when it comes to affordable great sounding audio interfaces. As always, take your time and do a little more research and when in doubt always ask before you buy!