Behind The Score: A Clockwork Orange by Wendy Carlos 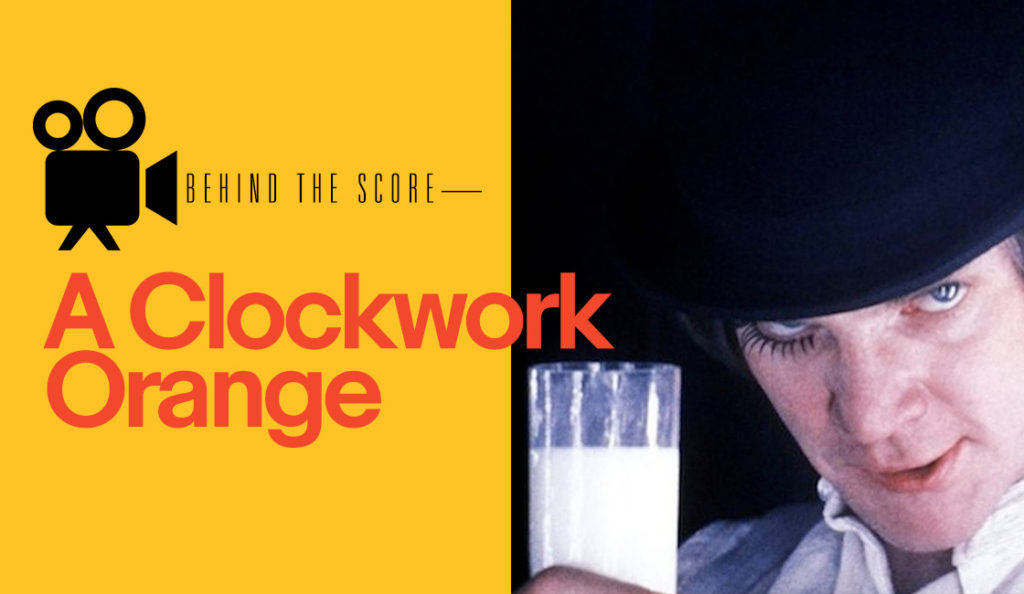 The stark opening to the Stanley Kubrick classic A Clockwork Orange is the perfect meeting of alarming stimulus; a screen bathed in blood red and three unsettling synthesised sounds melting downwards in pitch and tonality. These otherworldly sounds are followed by synthesised timpani hits and swiftly transition into the opening theme of the film, Wendy Carlos’ Moog rendering of 17th century English composer Henry Purcell’s Music for the Funeral of Queen Mary. The merging of classical music and analogue synthesis in this impressive soundtrack for this 1971 film makes for an anxiety-provoking cinematic experience, drawing the audience into the bizarre and terrifying universe of Alex and his gang of droogs.

For those unfamiliar with the film, we would strongly suggest a viewing! A short summary for the uninitiated however… The film, based on the 1962 Anthony Burgess novel of the same name, takes place in a near-future dystopia and chronicles the crime spree of central character Alex and his group of thugs or droogs. Following a frenzy of ‘ultraviolence’ Alex is captured and submitted to an experimental aversion therapy. He is injected with drugs to make him sick and forced to watch films of violence and sex, all the while listening to music of his favourite composer, Ludwig van Beethoven. Once set free into the world, Alex struggles to return to his life of crime and finds his once-familiar environment jarring and disturbing. The film is a bizarre exploration in artifice and truth, reality and fantasy. As viewers, we see ourselves in this dystopian futurescape whilst also struggling to identify with the brutal immorality of the characters, disjointed and nonsensical youth jargon used by the gang and surreal landscapes of the film itself. 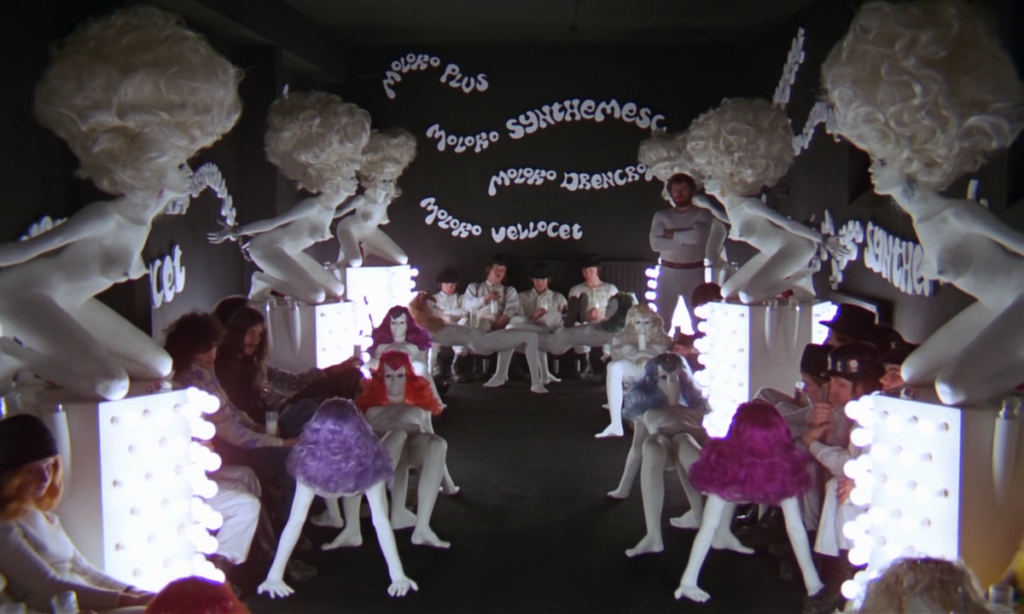 The electronic soundtrack by Wendy Carlos, which blends classical and original compositions smoothly throughout the film, is integral to the oppressive and alarming tone that haunts the viewing experience of Clockwork. Carlos herself was inspired to write her original piece Timesteps, of which an excerpt features in the film, as she was reading the original Burgess novel. Carlos was about three minutes into writing the piece when she started to read the book and from then on the work evolved into a kind of musical poem, ‘an autonomous composition with an uncanny affinity for Clockwork’. In fact, Carlos became so enamoured with the novel’s imagining of an ultra-violent future that when she and her producer, Rachel Elkind, learned that Stanley Kubrick had just finished filming the film adaptation they immediately sent him examples of their work. Kubrick was excited by what he heard and invited Carlos to work on the film.

Carlos and Elkind then set about writing and recording many original compositions to accompany the film. But in order to explain the creation of this intricate soundtrack, it’s important to know a bit of backstory on Wendy Carlos, who could easily be described as the Fairy Godmother of Electronic Music. Carlos was born in 1939 and studied physics and music at Brown University before she moved to Columbia University to study music composition in 1962. Carlos worked closely with Robert Moog on the development of the Moog synthesiser, a temperamental, complicated and very new instrument at the time. Without Carlos, it’s unlikely that we would be able to experience synthesis as we know it today. For example, it was Carlos who suggested to Bob Moog that he experiment with making the keyboard of the synthesiser touch-sensitive, which allowed players to incorporate much more emotion and lyricism into their work. She was absolutely a barrier-resistant badass, in both her professional and personal life. In addition to being an electronic music pioneer, she was publically outspoken about being a trans woman and came out as such in a series of interviews for Playboy in 1978.

In 1968 Carlos released Switched-On Bach a full-length album consisting of several pieces by Johann Sebastian Bach played on a Moog modular synthesiser. Carlos began this album as she had become frustrated with the inaccessible avant-garde music being created in the Columbia synthesis labs. Carlos, eager to use the new technology to make ‘appealing music you could really listen to’ set about laboriously playing huge scores of Bach’s classical compositions on what was a fairly moody new instrument. By her own admission, the writing and recording of the work was frustrating and slow. Unlike the midi-sounds we often take for granted on digital synthesisers, each sound heard on the recordings had to be dialled up, crafted out of one of four sound wave shapes; sine, triangle, pulse wave, and sawtooth. To change the sound further, there was a white noise source and a filter to reduce the high end of the wave to mellow it out, add resonance or reduce the bottom. Carlos then adjusted the attack time, decay, sustain and release so as the sounds produced by the Moog more closely resembled that of acoustic instruments. As Carlos states, ‘Make it decay immediately for a harpsichord, or sustain for a piano. Have the final release time based on the need, short and dry, or longer for the vibrating body of a cello or drum.’ Whilst all this may read as synthesis 101 for anyone vaguely familiar with electronic music creation, you have to remember that this technology was brand new at the time and Carlos was quite literally pioneering this stuff. In addition to this, the Moog would go out of tune almost constantly and Carlos had to record the music, literally huge multi-part classical scores, one bar at a time. A time-consuming and frustrating process of trial and error no doubt but as Carlos has said herself ‘If you’re a pioneer, you get to have the arrows in the ass’ (!)

But Carlos’ goal to bring electronic music to the masses was a huge and unexpected success. The album was an enormous commercial hit and was nominated for two Grammy awards. So, heading into the creation of the Clockwork soundtrack Carlos and Elkind had honed their Moog production skills and incorporated some even newer technology into their work. This included a spectrum follower, which served as a prototype for what would eventually become the modern-day vocoder. The spectrum follower essentially converted the entire range of the original input sound and overlaid it on another sound, meaning it could alter whatever instrument sound you liked and convert it to the sound of a human voice. Carlos used the spectrum to create the first-ever electronic “vocal” piece, and translated the Choral Movement from Beethoven’s Ninth Symphony into a work of true electronic wizardry. 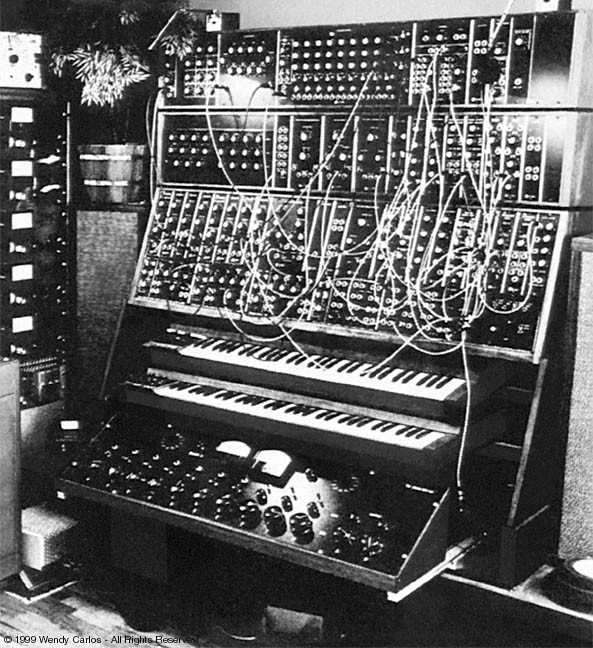 Cutting together music to synch with the editing of a film, however, was quite different to creating a standalone album, especially in a time when everything was done physically on tape and film. The process of composing for the film and its cues is described by Carlos on her website and is highly, painstakingly technical! Synth nerds will be synth nerds… As far as describing it in layman’s terms, Carlos recorded the Moog to an 8-track. She and Elkind then used a 60Hz tone to signal to the film audio engineers the beginnings of each track for synchronisation. Listening to the dialogue track through a mono audio dubber, Carlos and Elkind would literally glue a snippet of sine tone onto the audio tape to signal where there was a cue for them to hit in the film score. They watched the film scenes to be scored on a tiny, used Movieola. Talk about DIY!!!

In her miniscule New York studio, Carlos went on to rearrange many pieces of classical music that Kubrick had already gained permission to use including The Thieving Magpie and William Tell Overture by Gioachino Rossini, and other works by Beethoven. The merging of the otherworldly Moog sounds, mimicking the sounds of instruments we are familiar with ‘in the real world’, mirrors the bizarre reflection of our own world we see in the dystopian future of Clockwork. In Carlos’ soundtrack we hear strange versions of sounds and themes we know well; in the film we are asked to simultaneously identify with or reject behaviours and lifestyles that are perhaps only one or two bad choices away from our own comfortable lives.

Ultimately not all of the music written and created for the film was used in the final cut. Whilst it is not completely clear why, Kubrick or perhaps the production company, decided to use many of the original orchestral versions of much of the music translated to Moog by Carlos and Elkind. Carlos found this incredibly disappointing and as such, released her own version of the soundtrack in 1972. The release contained the complete version of Timesteps and another original composition called Country Lane that Carlos wrote specifically for the film. Whilst not all of the music intended for the film was included in the final cut, it is an undeniable fact that Carlos set the scene for many synthesised soundtracks that came in the years following. These days it is uncommon to hear a soundtrack without synths or electronic elements. The soundtrack for A Clockwork Orange was groundbreaking at its time; labour-intensive and experimental. However the tense effect that the strange dissonance of the Moog “instruments” and classical covers brought to the tone of the film was unrivalled at the time. We have Wendy Carlos to thank for this eerie foretelling of the power of synthesis.

This has been the first in a special Noisegate series we are calling ‘Behind the Score’. Look out for more in-depth explorations into the magical world of synthesised soundtracks in the future.