Is the Cassette Tape Making a Comeback?

Maybe it’s time to do your next mixtape on, erm, real tape? Or maybe not…

Though digital music accounts for much of what we now listen to, old school formats like vinyl and audio cassettes steadfastly refuse to disappear. The former is enjoying something of a healthy revival at the moment, but trying to find an album released on audio cassette is a little more challenging. Earlier in the year we chatted with Dinosaur City Records an independent label that is proving this wrong, showcasing local talent on their regular cassette compilations and releasing music from exciting new artists. Meanwhile professional audio gear manufacturer Tascam is prepping for a cassette tape revival with the release of the 202mkVII dual cassette deck.

So, you found yourself scratching your head at the vinyl revival? Well this will have you really confused: According to sales in the UK, Cassette tapes are officially making a comeback, – almost doubling in the first half of 2018. In fact, almost 18,500 tapes have been sold in the UK to date this year, according to Official Charts.

While of course this is a relatively a very small number and so statistically 90% represents very little – no doubt boosted by the Stranger Things soundtrack coming out on cassette, which is undeniably clever marketing – one way of understanding this is the “physical” effect.

If we accept a certain desire to “have and hold” music (think gatefold vinyl, lyrics on CD case inserts, and so on), then cassettes offer a low budget entrance into this world – at least for artists, who can produce a run of say 50 units, and then go to town on the packaging, while not breaking the bank.

This allows artists outside of the mainstream to brand their music how they want without paying for an expensive vinyl pressing, which encourages creativity. The fact that the audience has to do some work too (acquire a cassette player) kind of commits audience to artist, which is a nice dynamic.

Let’s not get carried away, though: Cassettes sound crap, break, are hard to search, and never gave us much pleasure at the time, always being regarded as a poor replacement for the real thing. Cassettes were always fiat currency against the gold standard of vinyl.

Cassette use will at best remain niche – but this mini-revival proves one thing: Never write off a format just because something else has to all intents and purposes replaced it. Someone, somewhere, will find that actually, it fits what they want to do right now just right. 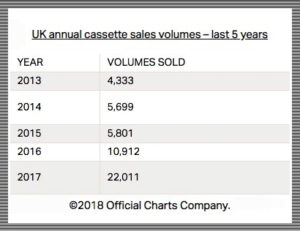