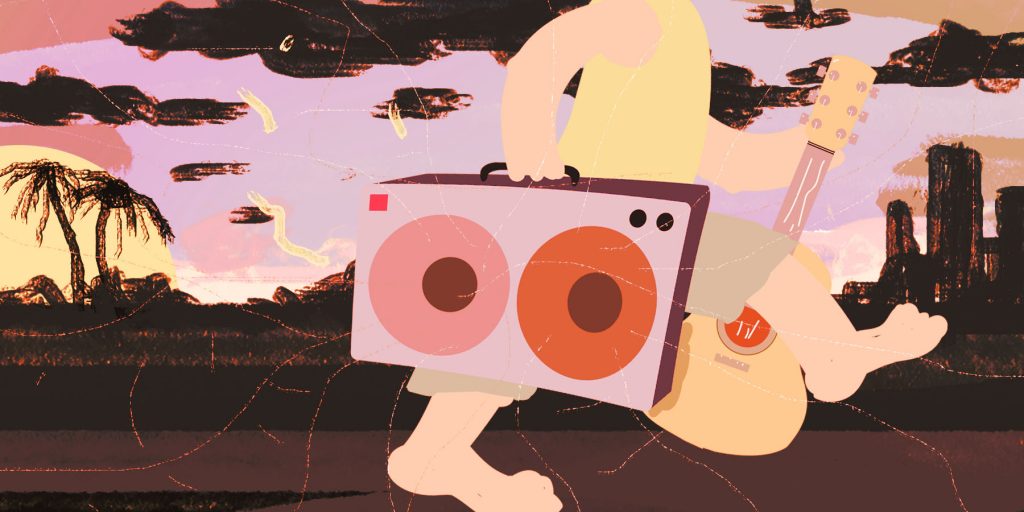 No matter whether you’re located the holiday season is fast approaching with gatherings, getaways and spontaneous jams being inevitable. For such events setting the vibe is key, thus having the right portable speaker system for music playback and mic/instrument connection is paramount. We’re not talking little handheld speakers here, we’re talking systems with some serious thump and that aren’t restricted to mains power. We’re going to look at several portable speakers that offer you flexibility for music playback and to host connections for spontaneous jam sessions and sing-alongs that are unavoidable this time of year.

The freshest offering to the world of portable PA’s is JBL’s new EON ONE Compact speaker system, jam-packed full of features to take your sounds to the next level and with its included rechargeable battery can be taken anywhere.

Offering up a mixer of 4 channels, with the first two being XLR/1/4” combo connectors, the third a dedicated 1/4” Hi-Z connector for instruments such as guitars and basses and the forth a 3.5mm line input or it can be connected to via Bluetooth. On the physical unit, there are controls over master volume, individual channel input gain, bass, treble and reverb, which are available on all channels. Furthermore, if you require more fine-tuning the Compact Connect application opens up massive control and tweaking with addition 4 band parametric EQ per channel, 8 bands of parametric EQ control on the master output, additional FX of chorus and delay as well as the ability to save snapshots for quick preset recall.

To top things off 2 USB connectors are on the unit which allows for charging of mobile devices or can even power a wireless mic or instrument unit (such as the AKG DMS100/300) for complete wireless fun anywhere. Phantom power and a ducking feature are also available, rounding out this incredibly powerful unit.

The EON ONE Compact pushes out a whopping 112dB SPL and is rated at 150 watts (peak) of power, a frequency range of 37.5Hz – 20kHz and can operate up to 12 hours on its internal rechargeable battery. Those needing a powerhouse portable system with all the features one could ever really need, this beast is worth checking out.

Somewhat of a legacy product, the Roland BA-330 Stereo Portable PA is a tried and true system that has aged well, with many of its features holding up to today’s standards.

The BA-330 features powerful mixer with 2x mono XLR or 1/4” connections, with channels 3/4 and 5/6 with 1/4″ connections for stereo sources. There’s also an RCA and 3.5mm stereo line input for connecting playback devices which can be used simultaneously. Switch between mic and line-level signals on the first 2 channels and switch in the built-in effects for channels 1,2, 3/4 and 5/6. There’s a lot of flexibility and connectivity available on this unit, however, no option for Bluetooth wireless playback is available.

The BA-330 pushes out a total of 30 watts of power (15 each side) and can be powered via mains or 8x AA batteries for a battery life of 8 hours at max power or up to 15 hours when operating in eco mode. For those needing lots of simultaneous connectivity, the BA-330 is an oldie but a goodie.

Popular for their massive range of iRig products, the iLoud Portable speaker system from IK Multimedia is a powerhouse for its humble, backpack friendly size.

Connect to the iLoud Portable via its 3.5mm input or for those wanting to jam on guitar or dynamic mic the dedicated 1/4″ input takes care of this. What’s cool is this input also features in-built iRig when used in conjunction with an iPhone or iPad for its processing. So you can dial in your desired tones and effects to then jam out and record your performance. There’s Bluetooth connectivity of course and battery power of up to 10 hours of operation.

Ideally suited for both those wishing to jam on a guitar or dynamic mic or for those just wishing to sit back and listen to some quality tunes. A massive 40 watts of power is offered, which is mighty impressive given its very compact size. 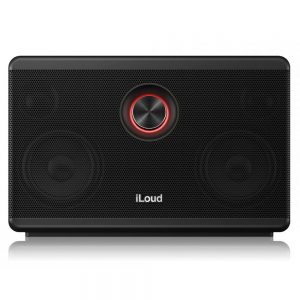 Although most would be associate Blackstar with guitar and bass amplifiers and stompboxes, Their Fly Family of amps can be doubled up for music playback as well as connectivity for instruments and mics. The SUPERFLY being the newest member of the Fly Family offers up more power, punch and connectivity whilst still remaining super portable and flexible for numerous applications in a tidy, stereo playback package.

Controls and operation are easy and straight forward. The mixer offers up to 4 simultaneous inputs. Channel 1 offers an XLR/1/4” combo connector for either mic or line-level connection, channel 2 is a 1/4” jack, and the others are a 3.5mm line/mp3 input and Bluetooth connection for wireless playback. Volume (and gain on channel 2) control, 2-band EQ, and reverb are offered on channel’s 1 and 2. Several voicings are also available to choose from on channel 2 depending on what sort of guitar and tone you are chasing. You can choose from acoustic or electric and if you require some dirt, engage the OD Electric button for some overdriven tones.

SUPERFLY boasts 12 watts of power (which can be doubled to 24 watts when paired with the SUPER FLY ACT powered extension cabinet), can be run via mains power, 8 AA batteries or the optional rechargeable battery pack (which allows for 15 hours of operation). This great little system is ideal for those wanting to connect instruments and mics for a jam or for general music playback situations. 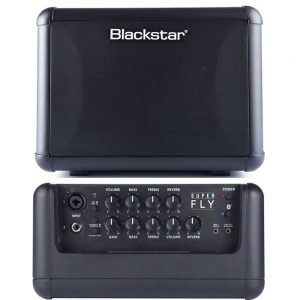 Each of these portable speakers offers a variety of features, power and connectivity for your given needs so it’s just a matter of assessing what you’re going to need for the holiday seasons to come.

The JBL EON ONE Compact is clearly the most powerful and feature-rich, which many will find incredibly appealing given the price and convenience of being able to take it with them anywhere. If lots of mic and instrument connectivity id required and Bluetooth connection isn’t the be-all and end-all, the Roland BA-330 is a great option.  For those not needing so many features but still packing good quality, connectivity and ease of use either the IK Multimedia’s iLoud Portable or Blackstar’s SUPERFLY will have you covered. Happy vibe filled gatherings to all!