Courtney Barnett on Writing, Her Pedals and Being OK with Not Knowing Things Yet

In 2012, Courtney Barnett released her first EP I’ve Got A Friend Called Emily Ferris on her own label, Milk! Records. At the time she was playing at small venues in Melbourne and pulling beers at the pub. When the EP was released, Milk! Records was nothing more than a little hand-drawn logo Barnett included on the back of the CD to make her look more professional. Eight years later and there is definitely no need to prove any legitimacy with two critically-acclaimed album releases, a Grammy Award nomination and seemingly endless international touring. Audiences around the world have connected with her honest and personal songwriting and have been floored by her energetic and charismatic performances. Following a songwriting collaboration with Kurt Vile on the album Lotta Sea Lice, Barnett released her second album Tell Me How You Really Feel in May of this year.

With all her international success, Barnett is still intimately connected to her roots; local and independent Australian music. Milk! Records has now grown into a celebration of independent music coming out of Melbourne and beyond, with releases this year from East Brunswick All Girls Choir, Loose Tooth and Evelyn Ida Morris.

Noisegate sat down with Courtney Barnett just a few hours before she played an intimate live-to-air in the Triple R radio live performance space. On stage, Barnett confessed she was a little nervous to play to a smaller hometown audience. As she and her band blasted through songs from their newest album and older back catalogue, you couldn’t have possibly known. Read on to discover the intricacies of this endearing songwriter’s set up, and find out whether she’d ever make an electronic album…

Can you talk about your current gear set up?

So, I don’t have many pedals. I have a tuner, I just got a boost type thing, I think it’s a MX… I’m so bad with pedals. Then I have a blues driver. And then I have an OCD for the really loud things and then I have a delay.

[laughs] Ok yeah it is! Oh and I just got… I’ve got a chorus pedal, which I don’t use as much any more. I think I used the chorus pedal a lot in the three piece (CB3) to like, go “Woah! There’s more than three people here!” and now I don’t use it as much. But I do still for fun. And then a Fuzz Factory, but I only use that a little bit because on the record for one or two solos. Kurt (Vile) got me one as gift, and so it’s fun to have it as just a special moment.

So you’re not using them all the time, just for heightened moments? Do you play with a clean sound a lot of the time?

Do you have different guitars for different songs?

I mostly use now my Jag, Fender Jaguar, and I have two of essentially the same guitar. I guess it’s called the Kurt Cobain special… I think I got it because it was one of the only left-handed ones but I think it has different pick-ups or something. I just like how it sounds. I have a normal Jag but it used to makes heaps of weird sound.

Yeah, single coil or whatever, where it buzzes… I don’t want to talk down how technical I am because that’s dumb, but I feel like I don’t know that much stuff. I’m always like “don’t undersell yourself!” but also like, just admit when you don’t know things. 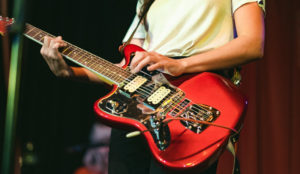 I think it’s ok to not know things, to just have curiosity. It’s fine to be a gear nerd of course, but lots of people who play music don’t really know about gear, they’re focused on playing and writing.

Yeah, totally. Lots of people who don’t know tech stuff just know what they like. Sound-wise. And what they don’t like.

And that’s also such a valid way to use gear, to follow the creativity and not have it be purely about the knobs…

So it doesn’t seem like gear is important to you when you’re writing. Is it only later when you’re in the studio that you think about the kinds of sounds you want on a song?

Yeah, I try to write in as many different ways as I can. On acoustic, on electric, on piano; the same song. I mean to a point it matters, it can really change the direction of a song I guess, but I think the bare bones should be able to work on any kind of set up.

No, more like the process of it extends… Like I might sit down one day on the electric and the next day on the acoustic or the piano.

Can you talk a bit about what your first experience of an instrument was? What was your response to it?

Yeah, I was like “Siiiiick.” [laughs]. And yeah, that’s kind of it. I mean I think when I started playing slide guitar in Immigrant Union I got a delay pedal so that the slide sounded nicer, just to make everything bigger. Oh, I got a loop pedal in my early twenties, which helped me write a whole lot of songs. I reckon that was a real game-changer for some of my songwriting.

Did you ever play live with a loop pedal?

Nup. I think I had grand ideas of that happening but I’m so bad at it. I could just never get it right. I saw some people doing it really well, maybe at the bar I worked at. And it was kind of around the time of Gotye, when he was just starting. I went and saw him and he did the whole show with a loop pedal. He looped all of his guitars, then sat down at the drum kit and drummed to it and sung. And I was like “Cool! That sounds really cool.” But I just could never keep them (the loops) in time… I don’t know how they do it! Too hard! 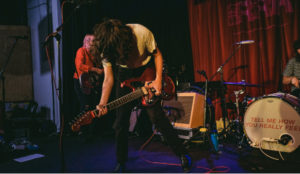 Your new record Tell Me What You Really Think seems to have bigger and more elaborately produced arrangements than the first record. What motivated you to try more keyboards and synths on this record?

So, Dan Luscombe (The Drones) did all of the keys and synths and I don’t really know a lot of the time what he was using, to be honest. I’ve done a lot of stuff with Dan in the past and I just really trust him now, from over the years. Just everything he does always seems to be right. I know we used one of those synths that are really tiny… I don’t know what he was doing though! I really don’t know that world.

Are you interested in that electronic world? Do you think you’d ever make a synth record?

I mean, I did get really obsessed with drum machines at one point in the last couple of years. I think maybe my brain doesn’t have the patience to get really into those worlds, to get really obsessed, to go down the rabbit hole. I get obsessed with the experimenting but as soon as I hit a wall I kind of lose interest. I guess it’s like a certain thing that some people have, of pushing through the learning process. I think I’m like ”Oh, that’s a bit hard!” [laughs]. I was really having fun with drum machines though, and I think my thing is really just having a place where I can just have things set up which I do have now. You know, the pack up and pack down in rehearsal places, or even just like getting a studio, the pressure of hiring a studio. I think I like the kind of relaxed feeling of knowing that I’m not on the clock or whatever…

So like, having your own space to have things to play with and explore?

Yeah, and just having the solitude to make mistakes. To figure it out, the embarrassing parts.

To have it sound bad for a while!

Exactly! Not to be in a studio, even if you love the engineer… You cringe and think “Oh, they’re going to think I’m bad!” I think that’s really important for me because I do kind of just shut off.

Maybe because you’re writing from a personal place you need the immediacy of an acoustic instrument? Rather than having to figure out the sound and then write…

Maybe. I remember when I was doing the demos before the album; it was just me and Burke (Reid). He was just in the control room and that was maybe the one time that I really let go and just went down this little six-hour session, I was like “Oh wow, what’s the time?” I had one of those old ones, I mean, I had no idea what I was doing, but I think it was like one of the proper old ones…

Yeah I think so! I was just like ”This is so fun!” but every time I did something (on that kind of synth); it didn’t do the same thing as it did before… I had no idea what was happening. It seems like for me it’s definitely more of a layering or additional texture, more than writing.

How does playing on someone else’s music change the style of your playing or writing? For example, playing with Jen Cloher or Kurt Vile. Do you find you play differently?

Yeah, definitely, definitely compared to my own stuff. One of the first bands I ever played in was as second guitar, that was Rapid Transit. And when I played in Immigrant Union it was kind of slide and second and third guitar. There were kind of two main guitars and I was the kind of third guitar, in a way. So I think it’s definitely a different way of thinking. Again it’s kind of that textural idea, and floating over the top. So, in Jen’s band it was always that, dancing around lyrics and dancing around the main part and her riffs. So just kind of being a supportive sound. And then, the bits where she was like “Do something crazy here!’” then I could be really loud [laughs]…

And same with Kurt, it was kind of the back and forth because we kind of shared songs. It was like one person would take more of the lead and the other would follow. But that was more instinctual; we never really talked about it too much. Listening. I think that’s a really nice part of playing music.