Digital or Analogue Mixing Consoles: What’s Best for YOU? 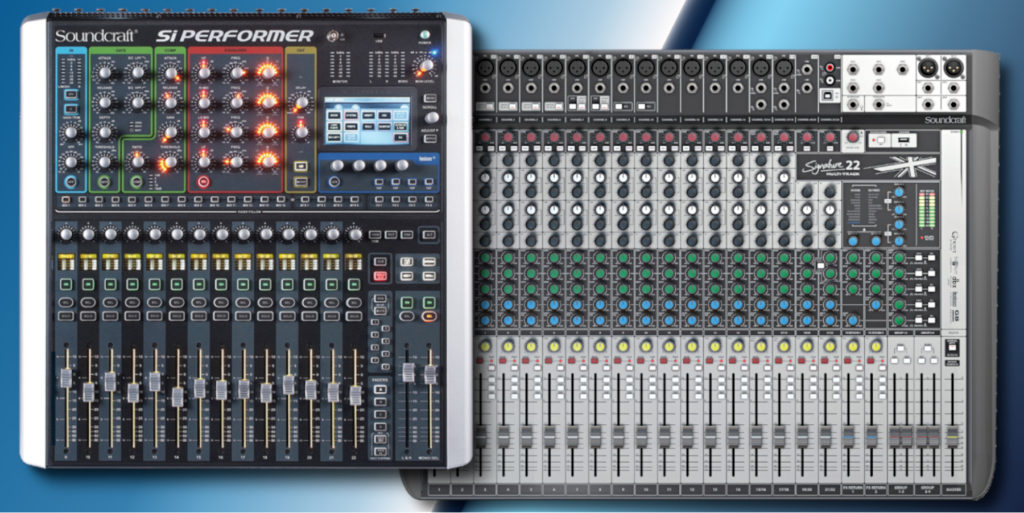 The battle between digital and analogue has raged across a number of platforms in the music industry. Both sides have their fans and detractors and the debate rages on. However, in the world of live mixing, this argument has been the mainstay for the elite. Digital consoles have typically been priced at the $20K + range allowing only the most veteran of sound engineers to offer their worldly opinion. For most musicians, the idea of running a digital desk for their live needs was somewhat of a pipe dream. However the last few years we have seen a surge in the popularity and more importantly the affordability of digital mixers. Consoles like the Soundcraft Ui24  and the Si Expression 1 Console have given access to these rarified formats. Now musicians have a real choice between the two, so which is best?

The analogue vs digital debate should probably be approached is the same way. What do you need out of your mix? For some having access to the sheer amount of options and routing, potential means nothing but digital will do. For others, the simplicity of analogue will always reign supreme. Below is a list of criteria that you should consider before making the final decision.

Analogue desks are laid out in a pretty standard format that a lot of us are familiar with, backing off on the gain, adjusting the EQ knocking out that pesky 2K ring in the monitors, we all know how to do that on an analogue desk. Digital mixers tend to have more unique layouts and the same fader can be assigned to various different functions. However typically digital desks allow you to change the layout to suit your specific situation. Want to monitor just your drums and nothing else, no problem. Don’t like that EQ layout, change it. You need to consider the amount of time you have to set up your own mix for your personal circumstances.

USB recording, built-in graphic EQs and FX can be found on a variety of analogue desks, you just need to look at the recently released Tascam Model 24 or the Soundcraft SIG22 MTK however digital formats encompass these features and offer a lot more. The question is will these extras add to your mix? Having optional parametric and graphic EQ on every output is great but are you going to use it? At the same time will the absence of not being able to put an individual compressor on every drum mic and then an overall gate on the subgroup hamper your drum mix? Think about the features you need for your situation.

Using the tablet component of a lot of modern digital mixing desks allow multiple users to have control over the same desk. You can now set up your single desk and have two people controlling totally different elements via an iPad for example as opposed to requiring to separate desks to control the FOH and stage. (Check our article on FOH Engineer Greg Jard: Mixes Remotely via Soundcraft Ui24) In the most limiting of situations, one FOH engineer will have to coordinate everything and rely on the band to point fingers up or down. Is this remote accessibility important to you and your set up?

Analogue desks provide instant hands-on approach. Turn the 80Hz knob up you get increased bass, simple. Digital offers a slightly different experience. Controls are all routed through a CPU. Depending on this CPU the latency can vary from barely noticeable to a mildly annoying. This can be compounded when you have a lot of processing on the digital mixer the whole thing can start to slow down and feel a little unresponsive. Now, this depends entirely on the quality of the mixer and how “busy” the CPU gets. What do you want to experience when you are mixing live?

While this may be the most important feature it’s also the most subjective. It can come down to preamps, op-amps, quality of PCB, quality of processors and most vitally how good the engineer is. Digital mixers will rely on AD/DA conversion for their sound whereas analogue relies more on the basic components of the desk to produce high-quality audio. When deciding between the two don’t fall into the trap of “analogue sounds better”. With the right processors and converters and digital desk can sound just as good as any analogue. When taking the quality of sound into account it’s important that the additional features of either desk don’t detract from this vital component.

Why Shopping Online Locally For Music Gear Is Better Than Overseas

Getting Started With Maschine+: Control, Sample and Sequence your Hardware Synths