Earthquaker have announced a new pedal that gives the Miso Cornflakes module a run for its money in the funny product name stakes, the Astral Destiny is an octave reverb pedal that packs 8 different reverb engines with modulation and 8 presets.

The 8 engines are as follows:

2. Shimmer: Adds an upper octave to the reverb tail

3. Sub: Adds a lower octave to the reverb tail

4. Sub Shimmer: Adds an upper and lower octave to the reverb tail

5. Astral: Adds an upper and lower octave combined with a regenerating tail

8. Cosmos: Adds a regenerating fifth to the reverb tail 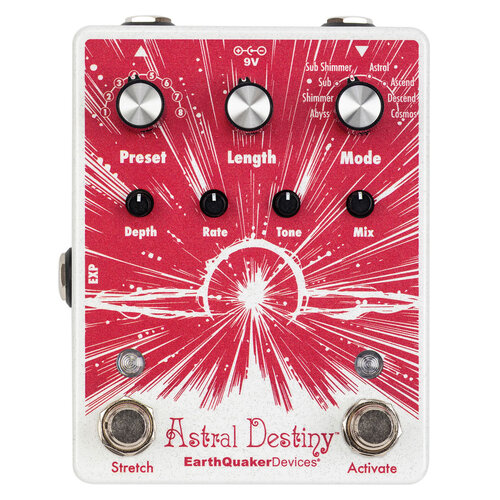 The modulation comes in the form of a chorus circuit with depth and rate controls, perhaps most interesting though is the Stretch effect, activated via dedicated footswitch. While engaged, this doubles the reverb time, creating a pitch bend effect. You have control over the length of time it takes to double too, so it can be quick jump or a more subtle slow bend.

Some people will likely be disappointed it’s a mono I/O pedal, so you don’t get the wide stereo image that synth and studio users desire, but for guitarists it’s game on. The flip side is that has likely been a contributing factor to its very fair price, coming in at USD$199.