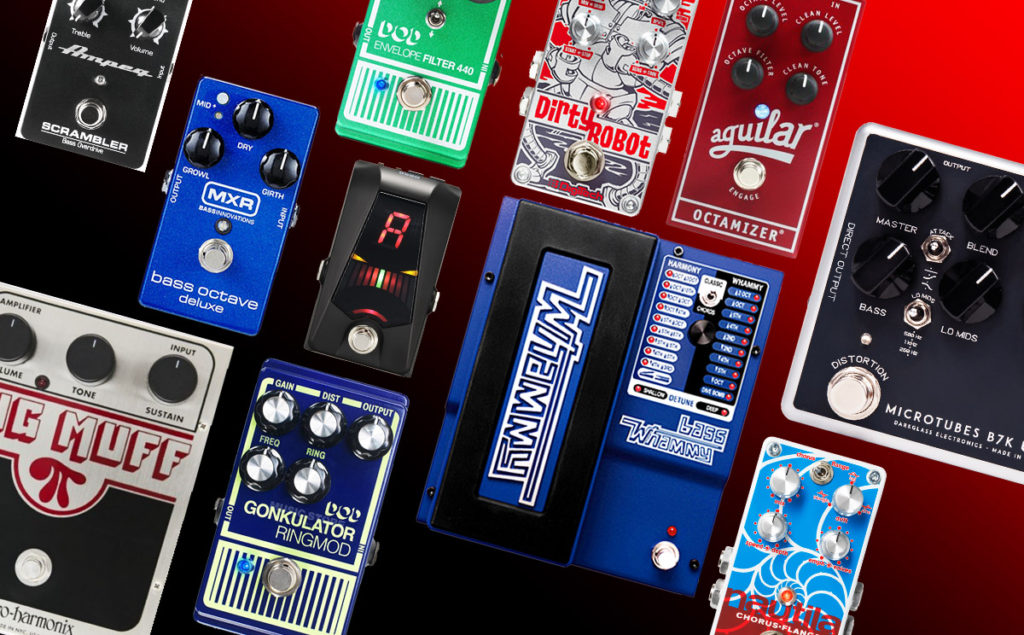 There are a lot of varying opinions on whether or not a bass player needs effects pedals, but going by the number of choices available on the market today, not only have they grown in popularity, they appear to have become the norm.

Many purists will tell you it’s all about the “tone”, which comes from the type of bass you play, the timbers and pick-ups thereof, the amplifier and the playing technique. That was all well and good for bass players in the 60’s and 70’s like James Jamerson (the bassist on most Motown Records releases from that era), or Jaco Pastorius (who could make the bass sing to any tune), but with a change in music styles has come a plethora of essential bass sounds which weren’t even dreamt of 30-40 years ago. When you think about Hip Hop, Funk, Rock, RnB, Heavy Metal and any other modern genre, the bass line is the cement which holds a song together and the different sounds which encompass these genres come from bass effects pedals like the Wah, Compressor, Overdrive, Octave or Fuzz just to mention a few.

Why should guitarists have all the fun!

There are many influential bass players from the modern era who have enlightened our senses with incredible sounds coming from their bass, and when you think of these bass players, one thing which comes to mind is they have all influenced the way today’s bass player approaches their arsenal of sounds. Players like Flea, Doug Wimbish, Chris Wolstenholme, and Robert Trujillo all use effect pedals to create “their” sound.

How to Choose Effects Pedals for Bass Guitar
As previously mentioned, there are various effects pedals available for bass guitars, so let’s go into a little bit more detail on some of the more popular type of pedals used to help inform your choices.

Compressor pedals such as the Aguilar TLC Compressor alter the range of a sound signal, cutting off the peaks of the sound waves so that they are smoothed out. This cuts out especially loud and quiet sounds. This pedal has been made popular when playing slap as it can provide a percussive tone when used sparingly.

The three basic types of distortion pedals are distortion, overdrive, and fuzz.

Distortion pedals such as the Darkglass Microtubes B7K Ultra and the AMPEG Scrambler compress sound signals, creating an even level of distortion which can vary in harshness. Overdrive pedals create a warm kind of distortion that is aimed at simulating the effect from a valve amp. Fuzz pedals like the Electro-Harmonix Bass Big Muff compress the sound waves further than distortion pedals, resulting in a more distorted sound.

Chorus and Flanger pedals like the Digitech Nautila double the audio signal and delay part of it, modulating pitch to produce a rich choral effect, where it sounds as though multiple instruments are playing.

Filters work similarly to equalisers in that they enhance and diminish certain frequencies, but they produce more drastic results. Wah wah pedals such as the Jim Dunlop Bass Cry Baby are a type of resonant filter with a variable pedal whereas an Envelope Filter like the DOD Envelope Filter 440 responds to harder playing by opening the filter wider.

These can also produce echo and slapback effects or varying degrees. Delay pedals vary in the length of possible delay and the various delay modes.

Pitch shifting pedals like the Digitech Whammy Bass Pedal alter the pitch of the bass, giving a heavy bass sound. Advanced digital pitch shifters can alter the pitch more radically, even into a different key, and can produce additional effects. Octave effects like the MXR Deluxe Octave Deluxe are a type of effects unit which mixes the input signal with an octave lower or higher than the original.

Ring modulators like the DOD Gonkulator combine two sound signals together, which can create quite ethereal and strange sounds. They are generally used quite sparingly if at all.

Loopers like the Digitech Jamman Express XT create the possibility of creating a loop or part, where the part is the piece that is repeated and then built upon. Bass players can use loopers to play a bass line and then solo over it. Parts of a piece can be pre-recorded and stored for future use, accessible by means of a foot switch.

Bass synthesiser pedals like the Digitech Dirty Robot and the BOSS Bass SYB5 Synth may have a variety of effects pedals, such as envelope filters and pitch shifters. These can create various interesting sounds and effects.

Tuner pedals such as the KORG Pitchblack Advance enable quick and accurate tuning. While most tuners can be used for bass guitars, there are also specific bass tuners.

There is one thing to keep in mind, that all of the pedals don’t necessarily need to be used in isolation. Why not combine a Fuzz, Octave and an Envelope filter pedal to get a distinctive Synth sound or an Overdrive and Chorus pedal for a warbled drive sound.

There is also no reason why you can’t try “Guitar” pedals either, but be wary that you may lose some of your bottom end tone due to these pedals being designed for more mid-range frequencies that a guitar produces.

So the possibilities are endless, so let your imagination take hold and find that “Sound” in your head with your next bass effect pedal.