Elektron were surprisingly absent from NAMM Show this year, it felt like the right time for them to have something new to show, but they were nowhere to be found. But here we are, 6 weeks later and they’ve got a new toy for us. The new Model:Cycles joins the Model:Sample at the most affordable end of the Elektron range, boasting a knob-per-function layout and their famous parameter locking sequencer.

The  Model:Cycles is based around 6 FM-synthesis-based tracks, for the sounds, you have a choice of 6 different engines or ‘machines’ as Elektron call them. The machines are Kick, Snare, Metal, Perc, Tone and Chord. Each of these machines comes with 4 x synth engine controls that modify each sound in their own way. You’ve also got an LFO per track, and a delay and reverb send effect. The pads are velocity sensitive, and each track features assignable velocity modulation. There’s also micro-timing on the sequencer for added detail. 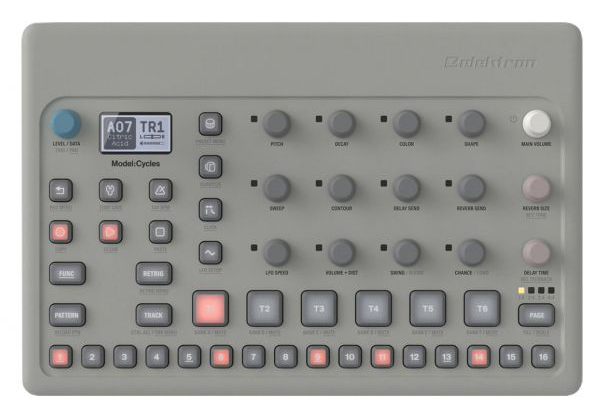 It’s a reasonably simple recipe compared to their higher end units, but in the right hands could very easily make for some wild IDM rhythms and sounds. Sometime restrictions can also force creativity!