Firmware Friday – Don’t Be That Person ‘Firmware Friday’ describes the baffling phenomenon of (mostly) sane and reasonable people deciding to update their gear’s software or firmware at the worst possible time – late Friday afternoon, just before the show opens, when everyone that can help them if something goes wrong is about to knock off. Extra points if this person has never done this procedure before, is doing it with a beta version, or was just bored.

What makes technicians do this is a mystery. Maybe it’s because most techs are veteran ‘tweakers’ obsessed with getting the best performance out of their equipment – after all, learning what all those buttons do is what got them the job in the first place. Some seem to have an unshakeable belief that making changes to their operating systems right before they need to be used in a mission-critical application like a live show couldn’t possibly cause any problems. Some appear to have no idea what they’re getting into.

While it’s great to keep your gear up-to-date with the latest bug fixes and features, just before doors in your theatre is not one of these times. Same for just after soundcheck. In an install environment, it’s late Friday afternoon. People can and have turned expensive pieces of audio equipment into decorative tableware at the worst possible time, necessitating emergency console replacement, memory wipes (there goes my show!), and worse.

There are several points in any firmware upgrade where the process can go wrong. Let’s go through them:

1 – The actual software and firmware file. You’ve gone to the manufacturer’s website. You’ve downloaded the .zip file. But, something’s gone wrong. Maybe it was your browser, or your internet connection, or the version of software you unzipped it with. You won’t know, but it could be corrupted.

2 – The combination of files you use. Some devices need two or more files of different types to be uploaded. If you don’t have them all, or mix up the versions, there will be problems.

3 – The wired connection to the device. Some updates are done by Ethernet connection, some via USB. If you have to change your computer or device’s IP address, this can cause knock-on problems with the rest of your gear if you’re networked. USB drivers can also cause issues. The scariest connection problem occurs if the connection is broken mid-upgrade by accidentally pulling out the cable. That is almost certain to put you in ‘brick’ territory.

4- Memory cards and USB sticks. Some upgrades are loaded via SD cards or USB sticks. Not all cards and sticks are created equal – the file can be corrupted in transfer, they can be formatted incorrectly, or your device might not get along with the particular brand or size you’re using. Most of the time, this will mean the update just won’t start, so it’s not the worst problem. Pulling out the card half-way through is, though. Yes, people have actually done this. Enjoy your new brick. 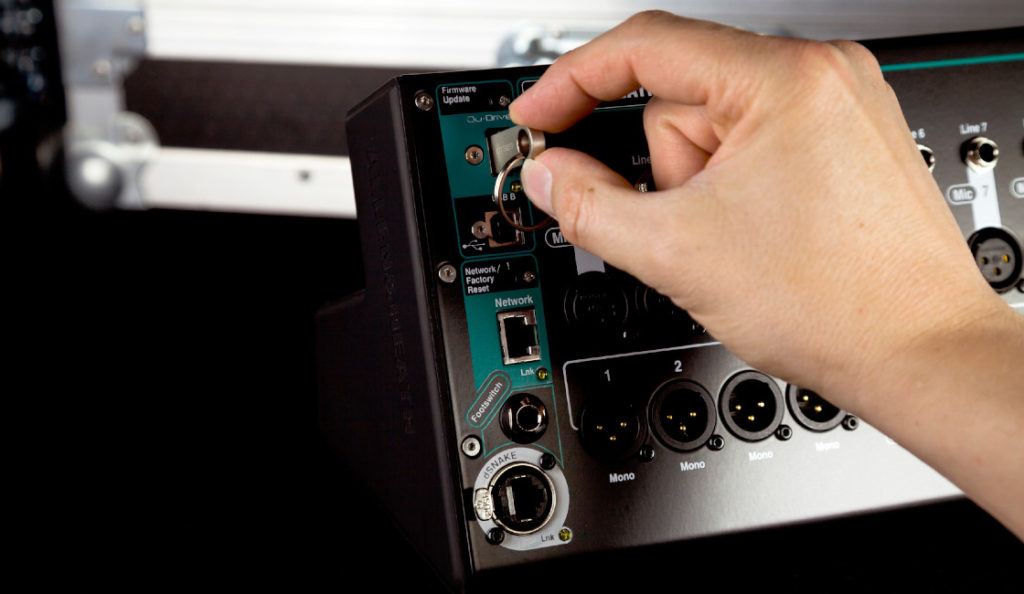 5- Power. If you lose power during this process, you are almost certainly going to be in a world of pain.

6- Computer issues. Windows, we’re looking at you. This is more about updates to a computer you’re using for a show or install as opposed to a device firmware update. If you’re using a PC or Mac to fire sound effects, record, or control another device, don’t update it while it’s on the run of a show. The possibility that it will not behave in the same way, or that a particular piece of software you’re relying will stop working means it’s not worth the risk.

7- Compatibility issues. Congratulations, you got this far, and your device updated perfectly. But now that thing it controls isn’t responding the same way anymore. And that new feature this version has means that weird things happen when you recall scenes. And your reverb sounds different. Was it worth it?

As crazy as it sounds, professional people with years of experience working on large-scale professional gigs have performed botched updates on digital audio consoles with less than an hour until show time. This has then necessitated urgent phone calls, premature ageing, heart palpitations, and all manner of unnecessary angst involving many people. Presumably followed by unemployment.

Yes, by all means, update your firmware. But do it when the equipment isn’t about to be used, you have some time to do it slowly and carefully, and there are options for assistance or replacements available. The tech support people in audio world will thank you for it!