Front of House: With Bonnie Knight 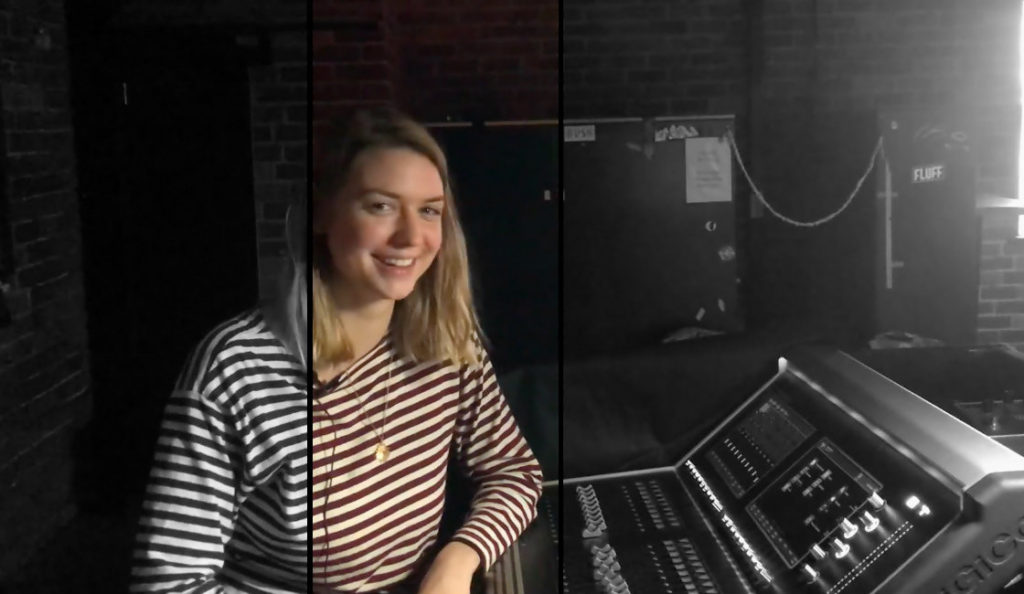 Whether you’ve been to see a stadium sized show of 50,000+ people in attendance or an intimate show of 50 punters, chances are there’s been a person who is usually one of the first to arrive at the venue and one of the last to leave. Charged with setting up the entire stage with microphones, floor monitors, running cables, tuning the system, cuing house music between acts and packing it all up at the end of the night. Often dealing with the odd punter giving their “expert” advice of how the band should sound and why they’re not doing a good enough job. We are of course referring to the unsung heroes of the live music industry, the people who keep our pubs and clubs sounding great and the vibes of a night flowing from start to finish, you guessed it, our live sound engineers.

In the second instalment of our “Front of House” series of interviews with some of Australia’s finest sound engineers, Noisegate was able to catch up with Bonnie Knight before a show she was preparing for at one of Melbourne’s more iconic live venues, The Tote. Although spending most of her time behind the console, Bonnie fills in for friends’ bands when she can and also takes up stage and production management gigs, time permitting. With a mighty eclectic music taste, Bonnie’s diversity as an engineer is incredible, proof of which lies with wide variety of artists she works with. With plenty of tours on the horizon, Bonnie is smashing out the gigs, all whilst keeping it cool, calm and collected, with a healthy dose of humour to boot.

Hey Bonnie, thanks for being part of Noisegate’s “Front of House” series. How was the last gig you mixed and who were you mixing?

I think the last show I mixed was here (The Tote) and it was the Erin Will Be Mad EP launch, which was about seven bands, was quite good. Quite a few bands, none of which I’d heard before, so that’s always interesting.

What got you started in live sound?

I was studying sound for no particular reason, it’s just that I liked music and then one day my housemate asked if I could mix a show and was like “you can do it, you’ve studied this”. It was eight bands at this venue in Thornbury that wasn’t usually a venue, so I had to set up the whole thing and I remember it being really like “Ok, I remember this from class, this, this, this.” And then I dunno people just kept asking me to mix shows and then suddenly one day I was like “Oh, I’m a sound engineer” (laughs). So, the rest is history.

What are some of your favourite venues you’ve mixed at?

In Melbourne, I really like Howler, I really like here, at The Tote. And I’ve mixed at The Forum, that was pretty good. But then overseas, there was a place in Chicago, I can’t remember the name of it but it was this beautiful big hall.

Who are some artists you’ve worked with that you’d consider a highlight?

All the bands I work with frequently I really enjoy so, HEXDEBT, and Divide and Dissolve and, Habits. But there was a band that I mixed in South by South West (SXSW) called Shopping who were really awesome, I had never heard them before and I was like “dame this band’s really cool”. I dunno, I think I don’t know if I’m bias but I constantly mix bands in Melbourne that I’m just like “I love this band, this is incredible” and I dunno if, like I feel like there’s not big bands that I could mix that would be more pleasurable than that, a lot of the time.

Does the music you listen to affect the way you approach mixing?

Yeah, and I listen to like heaps and heaps of different kinds of music, and I think that’s really beneficial to my job because I will mix things differently as I know how things are supposed to be mixed, rather than like having a template for “this is how you mix a band”.

What are some of the biggest challenges/most enjoyable things about being a live sound engineer?

Challenges, I mean stuff always goes wrong, but I’m kind of used to it. You get very good at handling issues and stress as a sound engineer. Just like being around live music as it is always really pleasurable and just the moments that happen in rooms full of people watching music, is really special.

Do you have a particular routine for setting up for a gig or does it vary from each venue and artist?

Definitely varies from venue and artist. Like if I’m mixing bands that I haven’t heard before I like to listen to them beforehand, that’s a big one. But mostly just get there on time, tune the system, check it, set up the microphones, BAM!

Are there any particular pieces of gear that are a must have for gigs you mix? Do you have a preference of digital or analogue consoles?

I don’t think there’s anything, I mean a desk is good. But I’ve mixed in such a wide range of spaces and sometimes you’re like “Ah cool they just don’t have that here; that’s alright, we’ll make do”. And I guess its just about being like, really concentrating on what you can do with that space or with that equipment. And I prefer digital cause I learnt on digital, but that’s just cause it has so many capabilities. And sometimes when I mix, like I mixed a show recently at The Curtin and it’s all analogue (there), and then next day I mixed a show was I was like “Aw, I just want all of the things here in front on me”, like that’s really nice.

Do you have any pieces of outboard gear or mics that you like using or that you have a preference over?

Nah not really (laughs), I mean, yeah but; it all depends on the style of music I guess. I like to have a kick in mic, that’s good, it’s a nice option.

We notice a Strymon Big Sky pedal patched into the System. Is it yours?

Yes, it is my Big Sky, I’m bringing it in for the show because the band want it for their vocals.

Lastly, what have you got coming up?

I’ve got a bunch of tours for the rest of the year that I don’t think I can mention cause I’m not sure if I’m allowed to. But ah, going to New Zealand, going around Australia, got a few festivals.