The Great Outdoors – Busking Made Easy 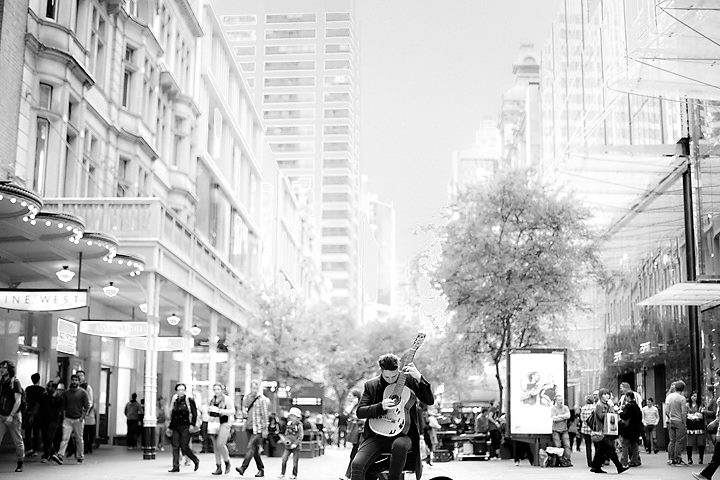 The concept of busking is not a new one yet in the right spaces and the right times, with the right performance it can be a lucrative one. The terms “Professional” and “Busker” are never ones that this writer thought would ever go together in the same sentence but much like flat earth theory I’ve been proven wrong. Professional Buskers are a main stay of our urban experience, take guitarist Tom Ward for example. When he’s not on Australia’s got talent he can often be found flexing his Spanish guitar muscles in Pitt Street mall in Sydney CBD. So if the busking side of life appeals to you where do you start and what do you need to know?

There are a variety of factors that go into busking, obviously some basic talent would be a start. Modern buskers encapsulate many facets of modern performance. Solo singers, guitar duos, beat boxers, dance troupes and keyboard players all make up the modern busking experience. While each performance will require its own set of intricacies they all have one thing in common, they need to be heard. For acts requiring music playback or using electronic instruments this is a no brainer however singers and guitarists should also take note.

Having a P.A behind you not only increases the obvious coverage of your performance but marks you out as a serious performer. Selecting the right P.A will be important as no matter how talented you if what you are performing through sounds terrible so will you. The most fundamental element of a buskers P.A compared to a standard P.A is its ability to be portable and ideally self-powered. In many instances you will not be able to rely a mains power supply so you will be required to have a battery powered option.[/vc_column_text][/vc_column][/vc_row][vc_row][vc_column][vc_column_text]There are a few types of battery powered options available. The main ones are A/D cell battery, lithium ION battery and lead acid battery. The least helpful amongst these are probably the A/D cell batteries. These come in a variety of formats such as AA, AAA and D. They generally provide less power than the other two and is particularly problematic when using bass heavy music, they simply cannot cope. A P.A requiring 6-8 D cell batteries will significantly increase the weight of your overall system. Above all else there is the cost, once used they have to be thrown away and you have to buy new ones. P.A systems that rely solely on these are best avoided. The Lead acid acts in a similar way to a car battery. These are typically included with the P.A and are generally calibrated to systems requirements meaning you get the best performance from the battery. They can be recharged as well, however be careful not to run them down completely as once flat they cannot be recharged and its time to buy a new one. Lithium Batteries are a great option. They tend to be made specifically for the P.A in mind so provide maximum efficiency. They are incredibly light weight and can be re charged many times. Also when flat they just need to be charged up again so ultimately they are the most cost efficient of three.

The next item to take into account is the type of PA system you will be using. Many of the portable systems available on the market are basically battery powered guitar amps. Now if your sole instrument is an electric guitar these can be quite useful. However if you plan to sing, play backing tracks, play acoustic guitar use a keyboard or electronic device or all of the above a guitar amp can be bad news. Guitar amps are voiced to compliment electric guitars amplifying a very limited frequency range. Putting an instrument or just playing music, which uses a much wider frequency range, often results in very thin and at times ear splitting audio. You can’t make much money if the amplification you are using is driving people away because it hurts their ears. The solution is to look for amplification that acts as a general P.A as opposed a specific guitar amp. These tend to have a much wider frequency range and accommodate more low end and crisper tops. This is particularly important for buskers using a lot of backing tracks.

Now obviously we need people to hear you. So the power rating of your system is hugely important. Depending on where you are performing noise requirement levels will be different. The ambient noise level in a busy street can be very high and your P.A system needs to compete with it. A 5 watt portable guitar amp may sound great in store but when you start putting multiple inputs through the device and increasing its volume to compete with basic street level noise it will start distorting and cutting out. P.A system power ratings can be confusing at best.

The best indicator for power is to look at the SPL (Sound Pressure Level) rating as opposed to wattage rating. This will give you an idea of how the unit uses its amplifier and speaker to produce the best volume. Ideally you should be looking at around the 113 Db SPL MAX mark as that will comfortably combat a noisy street. You won’t be using it at this volume constantly but you need to compete with, at times, very noisy areas.

Added extras and weight are also something to think about. You will be carrying everything you need to perform so the less you have to bring with you and the lighter that is the better. Think about what your P.A system is offering you, do you need to bring additional microphones, has it got effects built in, do I need an additional mixer and ultimately how will I transport this. You need to consider the practical elements of your P.A as well as its sound quality and power. Some units will contain wireless microphones with inbuilt receivers, this can be extremely useful as it means you can move around a performance space without the restrictions of cables. Other units can include built in mixers and effects. This is also highly desirable as it means all operations can be contained within the unit and you don’t have to carry around extra equipment.

So to recap. When selecting a P.A system for busking we have to take into account the following 4 factors

Consider these four points when purchasing a busking system and you won’t go wrong. Good luck out there.