History: Fender Stratocaster Back in the 50’s

The Fender Stratocaster is the unassuming classic electric guitar—a worldwide quintessential icon that leaps to mind at the very mention of the phrase electric guitar. Maybe that’s because it was so well designed to start with that it has existed largely unchanged for 60 years now, allowing it to become an ingrained form in the minds of successive generations.

Fender bought out their masterpiece Stratocaster to life in 1954. It was made in very simple principles with two pieces of wood bolted together. Fender suffered a lot of derision at the time because it was thought to be a very crude way of doing it especially from people like Gibson. Leo Fenders original idea was that when you wear the frets out, you just put a new neck on it.

The Stratocaster was tailor made for mass production, the electrics were mounted on the scratch plate and dropped straight onto the front of the guitar, and the two bits of wood would then be bolted together, so trained on the job technicians could put these guitars together quickly. The process was implemented to get them out the door so the company could survive financially.

Leo Fenders first guitar was the Telecaster and Leo was an engineer, so everything was with straight lines, hard edges and you can look at that guitar and you would think, yes he designed that because he wasn’t a guitarist. But when the Stratocaster was developed, he had input from other musicians and also from a guy who worked for him named Freddie Tavaraes from Hawaii who was a steel guitarist who actually did the slide guitar intro for the theme at the beginning of Warmer Brothers cartoons. Freddie had an eye for radiating curves and everything on the “Strat” has radiating curves and it’s also contoured on the back and on the front for comfort. So actually when you wear it tends to disappear, and when you play a Telecaster you would feel like playing a plank, which has its workhorse appeal but the Stratocaster is definitely a lot sexier.

The look and sound of the Stratocater has become a design classic and still inspires passion from its legions and from the video below, you can clearly see the workers were meticulous and highly skilled and the end result is that these guitars are now much sought after. No one can definitely say what the nuances and anomalies or “quirks” are that make these guitars so special, but the hand tooling techniques, bonding techniques, fretwork, lacquers, and properly weathered and dried aged woods and quality supply definitely has something to do with it not to mention 60 plus years of aging.

We just couldn’t resist including this meme… 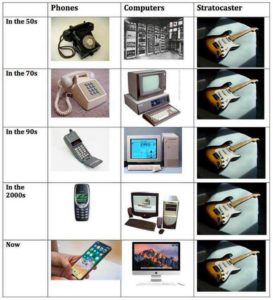