Here at Noisegate, we have a deep appreciation for music technology and the merging of analogue and digital into small format mixers really gets our heart pumping. We thought it would be important to review a variety of digital/analogue hybrid desks as they combine the warmth and ease of analogue with the signal processing and power of digital to create mixers that pack a punch for their footprint.

We have a look at the Tascam Model 24, Korg MW-2408 and the Zoom L-20 –all hybrid mixers, all Japanese made, and each fills a niche when it comes to different applications. The Tascam and Korg are also relatively new to the market so we jumped at the chance to compare them.

It records to SD and works as a USB multitrack interface, good for studio and impromptu recording sessions. My favourite trick that the Model 24 can perform is recording to the SD card, printing the recordings through the compressor, EQ and effects into your DAW (through a separate interface) and having no change to the original recording. This allows fine-tuning of EQ and compression without worrying about permanently changing a recording. The Model 24 also has a dedicated Bluetooth channel which can be used for phone call interviews during podcasts or for easy connection of a device to play front of house music between performances. A built-in 7 band graphic EQ means you have some system tuning capabilities in a live sound situation as well. 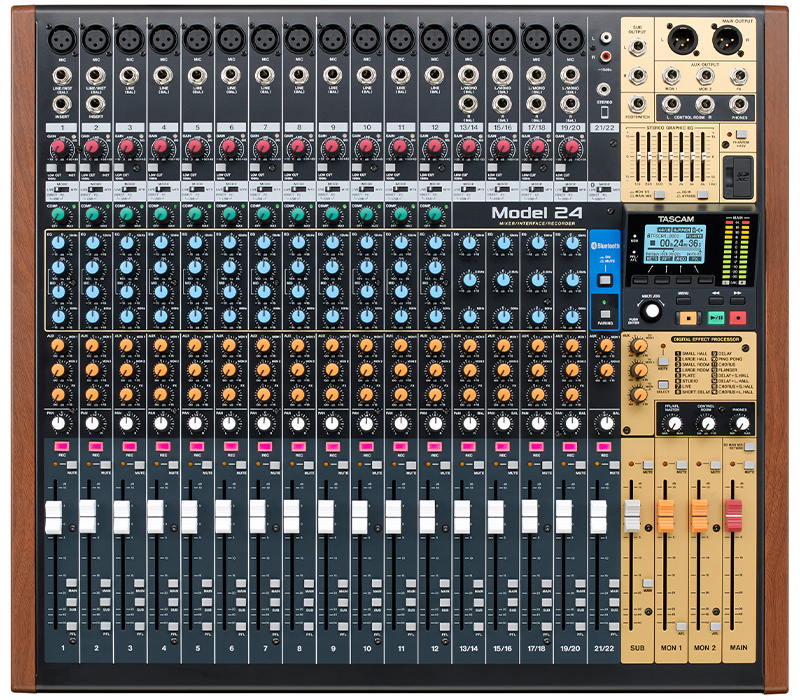 The MW-2408 was designed by Greg Mackie and Peter Watts, two legends of compact mixer design. Those of you who are familiar with Mackie mixers will notice the similarity in design and aesthetics – even the Korg MW manual share the same Mackie layout, down to the same jokes by Greg Mackie! The MW-2408 has 8 mono channels, 8 stereo channels, 20 built-in digital effects, 4 test tone generators, programmable digital graphic EQ, 4 stereo subgroups, 4 mute groups, one-knob compression for first 8 (mono) channels, 3 band EQ with sweepable mid for the mono channels and 4 band EQ for the stereo channels. Like the Model 24, phantom power only goes on or off.

The first key feature that really sets the MW-2408 apart from other small-format mixers is the 4 stereo subgroups with individual outs. This provides options in terms of routing and means that outboard gear can be introduced to the chain before heading into your interface (in a recording situation). The subgroup outputs are great for live performance situations, allowing the engineer to really customise the FOH and foldback mixes. This is different from the Tascam as there’s no SD card to record to, but there are more flexible channel routing options.

The mute groups are another feature seldom found on small format desks. The mute groups are easy to program and can be set up on the fly and allow for quick and easy muting of instruments during live performances. The MW-2408 also has a ‘break’ button which mutes all inputs instantly which can be very handy when a feedback loop occurs.

The one feature I haven’t seen on any other mixer of this size that is present on the MW-2408 is the programmable digital graphic EQ. This graphic EQ allows you to change the frequency of each band independently, allowing for surgical removal of feedback and unwanted frequencies. A built-in spectral analyser also helps to visualise these problematic frequencies, making it easier to tune a system when using the MW-2408.

The calibration test tones are another handy addition to the MW-2408’s arsenal. The final 4 ‘effects’ include a 1 kHz sine tone generator, pink/white noise generator, slow and fast sine sweeps up the audible frequency spectrum. These can be very handy when a sound system requires tuning in a live application and environment. 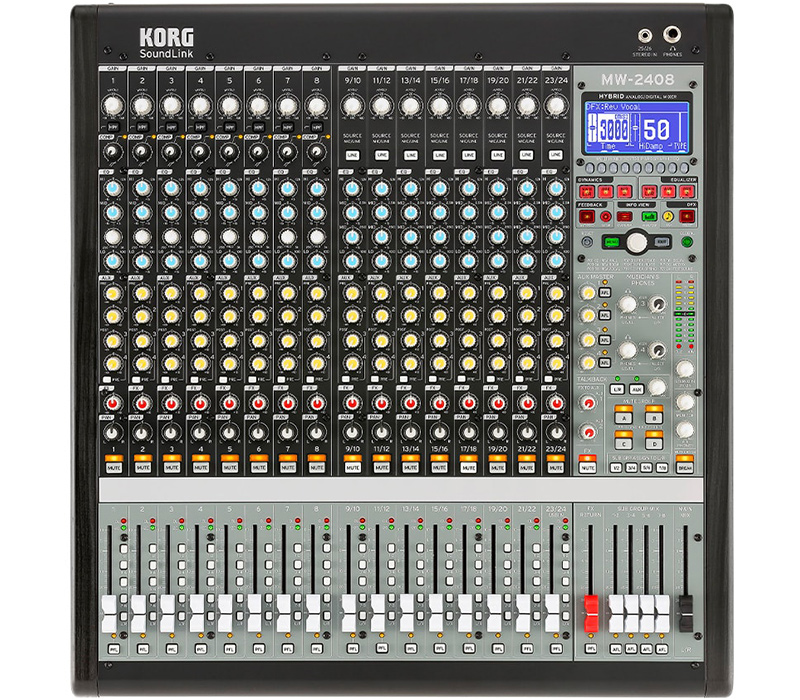 The L-20 has 16 mono and 2 stereo inputs. Each channel has a 3 band EQ with sweepable mid, high pass filter, effect sends and one-knob compression. It also records to an SD card like the Tascam and has a  built-in slate microphone.

Unlike the previous two desks, the L-20 has a phase invert on each channel and the phantom is spread out across 4 separate groups, allowing condenser and ribbon microphones to be used at the same time. The L-20 also has 6 headphones outputs plus one dedicated headphone output for the engineer so multiple people can have their own headphone mixes.

The L-20 can save up to 9 scenes which can be used to recall fader positions, pan setting, mute settings, EQ settings and more. The L-20 can also be controlled wirelessly via a free iOS app called ‘L-20 control’ which can control most functions on the desk. It can also work as an audio interface for your DAW.

The L-20 also has 2 separate digital effects engines (compared to one on the Korg and Tascam). Each engine has 8 unique effects and having 2 means 2 separate effects can be used at one time giving more control over the sound. Although having 2 separate effects engines is a boon, Korg has a great reputation for effects and seems more intuitive with a large backlit screen which easily displays the all the effect parameters whereas the L20 which has multiple parameter names written under each control knob.

The L-20 would be useful on film and advertising sets, orchestral recordings and anywhere were multiple headphones sends are required. 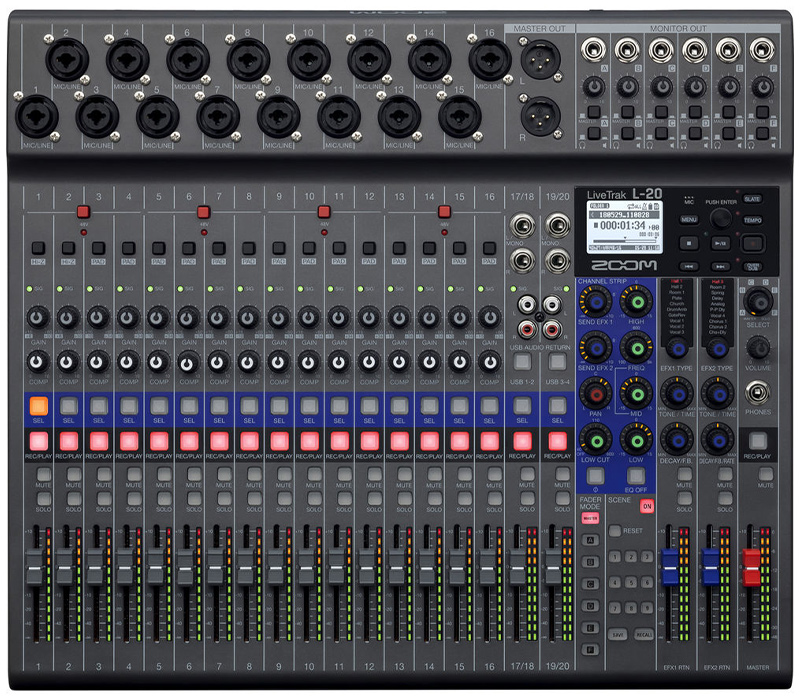 Is there a standout?

All 3 mixers discussed here have many great features and are suitable for a variety of different applications. It’s hard to separate them as many share similar features and functions.

In my opinion, the Model 24’s ability to interface and warm preamps make it a great studio mixer, however, it would also perform well in live applications with its graphic EQ and other features geared towards live production, such as the sub and aux sends and Bluetooth channel for FOH music.

The MW-2408 and its mute groups, programmable graphic EQ and calibration tools make it a fantastic mixer for live applications and environments. The 4 stereo subgroup outs and high-quality Korg effects would also make the MW-2408 great for project studios too.

The L-20’s highly transparent preamps and SD card recording make it great for orchestral and other live performances that are focused on capturing the tone of the room and the performance with as little colouration from the recording gear as possible.

Both the Model 24 and MW-2408 stand out for me given the increased number of inputs along with the Model 24’s unique SD playback capability and the MW-2408’s live sound functionality from the programmable digital graphic EQ, spectrum analyser and mute groups. Whilst specifications and audio quality will always be important no matter what you choose – remember our individual approach and how we work with mixers is also an important quality that is hard to convey here. As always go check these mixers out for yourself.

Also, check out our first look and detailed review of the Tascam and Korg mixers: