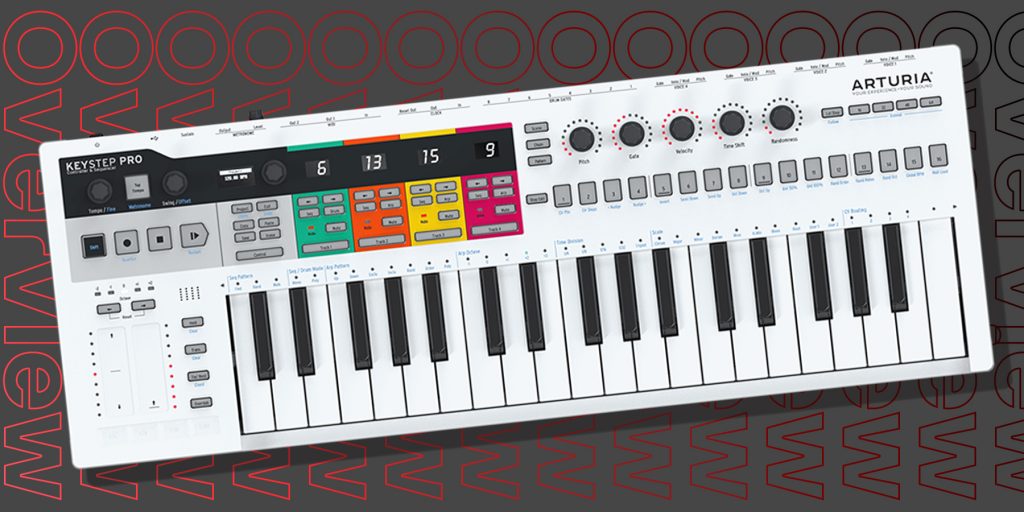 Showcased earlier this year at the NAMM show in California, Arturia’s new KeyStep Pro had little problem stirring up buzz within the electronic music community. The Keystep Pro has evolved from its smaller sibling the KeyStep and follows a popular lineage of hardware controllers, and those in the know will notice some similarities to the mighty BeatStep Pro. The KeyStep Pro takes things to a new level with a 4 track polyphonic sequencer and arpeggiator, plenty of connectivity options, stacks of performance features and some great tools for generating musical ideas.

So, having spent a bit of time now with the Keystep Pro what struck me first was how fluid it made the workflow between hardware synths, drum machines and even Ableton Live. Using multiple synths and modules can be cumbersome, especially when you consider potential troubleshooting scenarios, connecting them together, and blah blah blah. Having one unit to unify them all really helps keep the creativity flowing – so with that said, let’s make some music.

I wanted to keep it simple, so I began with just a couple of synths and a drum machine. First up is the KORG Nu:Tekt NTS-1, which I thought would fit the bill perfectly for a lead melody as a little mono-synth, I also wanted to experiment with the KSP’s poly-step sequencer so I brought in my Roland Boutique JU-06A for its 4 voices, and lastly my Roland TR-8 for drums.

Note: The KSP has 2 MIDI outputs and one MIDI input, and here you’ll notice I’m using 3 units with MIDI, so I used a MIDI splitter box to split the MIDI signal to a 3rd synth.

The Keystep Pro’s 4 tracks can easily toggle between a polyphonic sequencer or an arpeggiator, with track 1 the exception as it allows you to toggle between a sequencer or a dedicated drum sequencer, but more on the drums in a sec. Navigating between tracks is a breeze, simply press the track button, and the KSP’s LED lights will assign to the colour of the selected track, a super nice touch. When in sequencer mode, recording notes can be done in 3 ways; Punching in notes per-step by selecting a note on the keyboard and pressing the corresponding step, recording notes in real-time, or like a traditional step-sequencer.

Each step can trigger a chord with a whopping 16 note maximum per step, and a total of 192 notes per sequence, Jeeeez Louise!! Editing chords is also pretty straight forward; simply press the ‘step edit’ button and the sequencer will then display all the notes within the selected chord, where I could easily adjust the gate/velocity and the probability of each Note. Speaking of which, the Pitch, Gate, Velocity, Time Shift and Probability encoders allow you to make plenty of interesting adjustments to your sequence per-step or over time.

Being a fan of the Beatstep Pro, I was particularly curious about how the KSP’s sequencer would handle programming drums. As mentioned earlier, track 1 can be a drum-sequencer and can sequence a total of 24 drum sounds. Once selected, the LED lights above the keys highlight which notes will trigger drums on my TR-8, and the sequencer allows you to separately sequence individual drum sounds as you expect. To create more natural and humanised sounding drum phrases the encoders come in handy for changing velocity levels per-step and making timing adjustments, plus it’s possible to record drums quantised or un-quantised. Each sequence allows for a maximum of 64 steps, accessed via the step division buttons in the top right-hand corner and there’s 3 different way the KSP will play a drum sequence; Forward works as you would expect, RANDOM, will randomly play all the drum notes within your sequence, and WALK is a little like random except it add a little more shuffle and groove giving it an interesting rolling like sound. I found this to be a fun performance trick for dropping in on-the-fly.

At this stage, sequencing has been simple and straight forward, and I’m loving the quick access to multiple synths so it’s clear a there’s a lot it can do. This alone will be enough to satisfy the needs of many, however, for my money, I really need tools that help inspire Ideas, so it’s time to dig deeper.

The KSP has plenty of secondary functions that can be enabled by holding the shift button, that opens up a world of new possibilities. They allow you too really mess the pattern up and change it completely, for instance, you can randomise the order of the notes, go up and down octaves and semi-tones, invert and nudge the notes within the sequence as well as quantise notes. I find these tools really help with creating inspiration for melodies and basslines. Another handy feature is the scale mode, where it’s possible to assign notes to any root note to any of the 7 scales of your choosing – features like this are pretty commonplace amongst hardware controllers and soft-synths these days and in my opinion would be a deal-breaker without them so it’s good to see them included.

Moving on to the arpeggiator you have options which include several different arpeggiator types, octaves shifts and changing the timing divisions, however, the arp really raises the game when you throw in some randomness and change velocity levels and note lengths via the encoders. My only gripe with the arpeggiator is you can’t record arpeggiator playback it into the sequencer, rather you can only perform and ‘hold’ it, however, I’m sure it’s something that could part of a firmware update.

Something that I nearly forgot to add earlier and is something that I enjoyed about my old Beatstep Pro, is the ability to control some of your synth’s parameters via knobs and record parameter movements into the sequence. This can all be done via the utility menu where I found it easy enough to assign knobs 1, 2 and 3 to my filter cutoff, resonance and LFO rate, although the only downside is KSP has fewer encoders than the Beatstep Pro meaning there are fewer parameters to control, but I hardly see this as being an issue for most users.

When it comes to the world of modular synths, I’m no expert but all you need to do is look at the back panel to see extensive CV/Gate/Mod outputs plus 8 drum gates giving stacks of control over your Eurorack gear including your percussion modules. Noisegate will bring some nice modular jams with the KSP very shortly! Here’s a little clip to wet your whistle for now.

Something that I’ve been looking at pursuing is performing live sets with my hardware gear, however, for the longest time, I felt overwhelmed by the thought of how to practically put this together. The Keystep Pro has opened a lot more possibilities so it’s something I will work on moving forward. So in summary, the obvious practicality of sequencing synths, drum machines, Eurorack and even your DAW is clearly an achievement with the Keystep Pro, however, in my opinion, where it really excels is its ability to create and inspire musical ideas. It’s certainly going to feature as a mainstay in my setup.