While exploring what the Korg SQ-64 can offer to synth heads who indulge in the Eurorack modular side of synthesis, I stumbled on an exciting use for the Korg’s unusual Arp function that’s perfect for use alongside faux-polyphonic modules like the 2hp Modular Pluck and Bell (as featured in this video), Mutable Instruments Rings, Qu-Bit Surface and likely some others.

The biggest limitation of CV is that it can only transmit a signal for one note at a time. These modules get around that limitation by treating notes like a percussion or string instrument. Each note is struck with a CV trigger and resonates the note received at the pitch CV input at that instance in time. When a new trigger is received, a new note is generated, while the previous one continues to, simultaneously, ring out naturally. 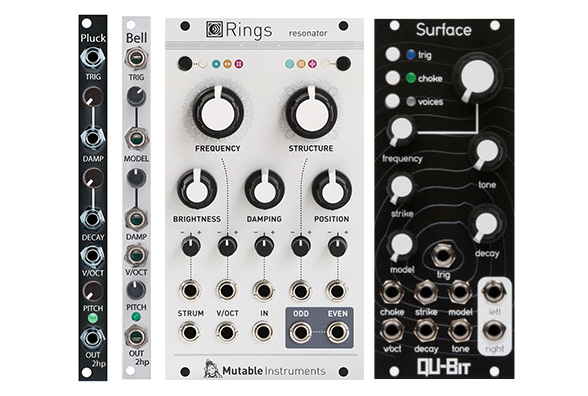 Some of the modules available that are capable of polyphonic sounds

To explain that further with a simple analogy, If you think of strumming a guitar, the pick can only hit one string at a time, but each string resonates, creating a chord. Now think of the pick as the trigger, and the fingers pushing the string against the fretboard as the CV signal. That is how is polyphony is achieved in Eurorack.

The guitar analogy I used here is exactly how the SQ-64’s ARP function works. The ARP divides a single step in the sequence into how ever many notes you assign to that step, and ‘strums’ through them, meaning that with the SQ-64, modular synthesists can now strum chords without the bother of having to work out complex ratcheting and sequencing patches — an incredibly useful feature!

Even without the polyphonic modules, this unusual per-step ARP function allows for complex polyrhythms since one step could, for example, be divided into 2 divisions, the next one 3, the next one 2 and so on. Perhaps ‘ARP’ isn’t the best name for this function since it brings to mind classic 16th note up/down patterns, but regardless, it’s super cool!

To use it, make sure your track is in ARP mode, and press shift to see the option for altering the repeat (I change it to 1x in the video as I dont want it to repeat). Now enter keyboard mode by holding the Pitch button and selecting your track. Now simply hold down some notes and tap which step of your sequence you want them applied to.  You can also assign each track to be in a scale of your choosing, making things more melodically cohesive.