For better or worse, Matt Bellamy has never been one to shy away from employing high tech modifications to embellish his guitar playing on stage and in the studio, most famously rocking a guitar with a light-up X-Y midi touch screen installed that controlled a Korg Kaoss pad back in 2006. So what happens when he wants to play Arturia‘s Prophet V software synthesizer on stage with a MIDI guitar, without the pain of being wired to a computer? You build the computer into the guitar of course.

The team at Mind Music Labs, who recently made headlines with their real-world version of the Steinberg software synthesiser ‘Retrologue’ at Superbooth 2019, were tasked with the project after a meeting between Bellamy’s guitar tech Chris Whitemyer, Arturia, MIDI guitar experts Fishman and Mind Music Labs at NAMM 2018. At the time MML had just come out with their ELK operating system — an ultra lightweight and low latency music software system with official support for VST plugins. Whitemyer saw the potential of the OS, it opened the door to software instruments designed on the VST platform being installed into real life hardware. 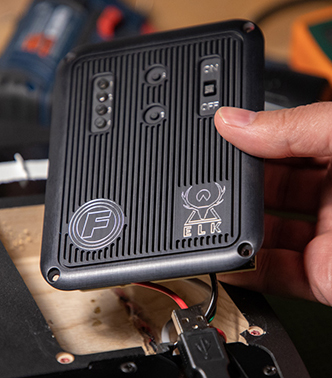 “When Matt told me he absolutely wanted to use the Prophet V softsynth live on tour” said Muse guitar tech Chris Whitemyer, ”but still be able to move around the stage without any restrictions, I knew we had to find a new kind of solution that would take the computer out of the picture.”

MIND Music Labs CEO Michele Benincaso commented “Getting three different companies to join forces on a special project like this does not happen very often, so this was truly special. To go from a first meeting at NAMM to a functioning system in just weeks was a mind-blowing achievement. It required the special expertise and focused efforts of all three companies to pull it off – I can still hardly believe we did.”

“To see one of our V Collection classic products like the Prophet V on Stage with Muse is very exciting,” said Arturia CEO Frédéric Brun, “The fact that it is that same plugin running in the guitar as you use in the studio really makes all the difference. I mean, Matt Bellamy even uses the same preset in the studio!”

Check out the full story via Mind Music Maps here.

From here of course you’ve gotta wonder what other VST instruments could be run on a guitar running ELK OS. Maybe next we’ll see amp modelling and digital effects processing power built-into guitars? With VST amp sims getting closer and closer to the quality of the big name digital profiling amps, this could signal a big change.