Melbourne’s Würst Nürse have been bringing their high energy “nurse-core/nurse-punk” attitude to fans since 2016. Sharing members with acts such as Camp Cope and working with the likes of Ben David (The Hard Aches) on their debut EP “Hot Hot Hot”, you’ll want to lock up your patients before booking your next appointment with these five nurses. We caught up with guitarist Anna Stein to get an insight into what favourite piece of gear she uses to create some serious fuzzy goodness.

Hey Anna, so what’s your favourite bit of gear and why do you reckon it’s awesome?
Definitely would have to say my guitar. It’s a MIJ Fender Mustang, ’65 reissue (vintage white and tortoise shell scratch plate). Made in maybe 2006-2008 according to the serial number. I bought it because I wanted a guitar that was comfortable and easy to play but also a good quality instrument that would allow me to experiment. I think maybe I also succumbed to Fender’s very clever campaign to market offsets to first-time guitar players (even though I bought mine second-hand).

Has it influenced your playing and/or songwriting for the better?
I definitely find it more comfortable to play on stage, although I chose to record the Würst Nürse EP with a Les Paul because it was easier to get the tone I wanted from it, which has a heavy overdrive/fuzz sound.
Im still experimenting with different setups with the Mustang to get the sounds I want depending on the songs I’m writing. I think playing with different genres of music that are less “heavy” has made me appreciate my simple yet versatile Mustang. And the whole point of buying that guitar was to be able to learn and experiment with tone and effects. 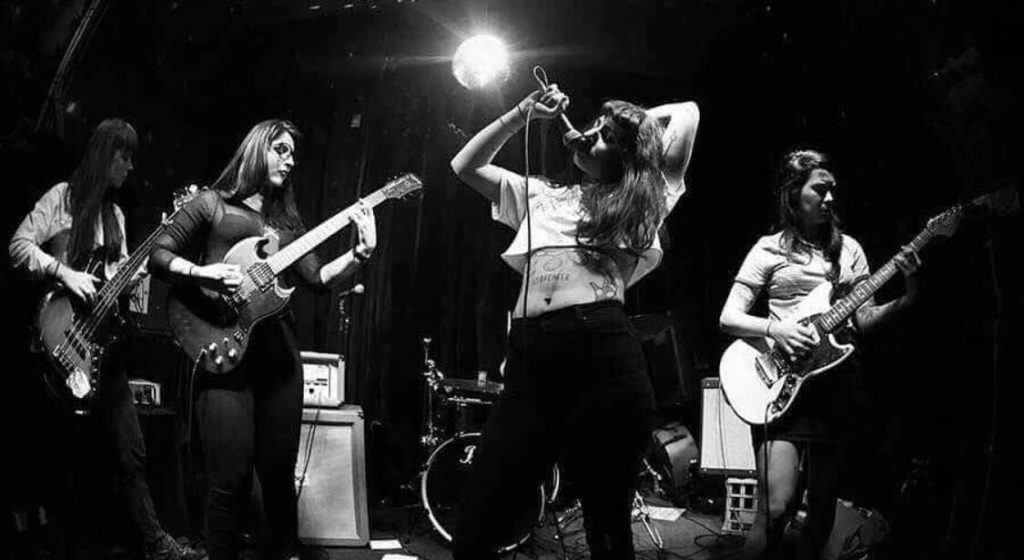 That’s a big change in tone coming from a Les Paul, you’ve been playing the Mustang live though?
I have been playing my Mustang live ever since I bought it, but yeah swapping from a Les Paul to a Mustang meant a whole lot of tweaking of pedals. It’s hard to find the right the balance of loud but not too obnoxious. I’m excited to try out a ZVEX Fuzz Factory pedal for our next show. I played around with one today. I loved that you can get a chill vintage fuzz or an insane dying vacuum cleaner all in one pedal.

Have you made any modifications?
Not yet – a friend of mine is trying to persuade me to swap out one of the pick ups for a hot rail, but I’m sceptical that I’d be happy with it judging by what the internet forums have to say.

Any tricks to using it you’re willing to share?
Don’t loose the whammy bar if it’s not attached to the guitar. Makes changing the strings a pain. I have made that mistake more times than I would like to admit. I also just learnt that you can move the cigar tube on the dynamic vibrato to get a really cool Twin Peaks-y kinda sound.

Are you a gear hoarder or do you tend to gravitate towards single bits of gear for long periods of time?
I’m not ashamed to admit that I am a massive hoarder. I have never sold anything but bought (and borrowed) a bunch. Mainly pedals. They both confuse and intrigue me at the same time. I hoarded coloured pencils and pens as a child and I think this is like the adult equivalent.

What’s in the foreseeable future for Würst Nürse?
We have our debut EP “Hot, Hot, Hot” out on Bandcamp and Spotify and we will be doing a launch on Thursday, August 16th at the Tote. All the details are on our Facebook page or you can buy a ticket also from the Tote website.