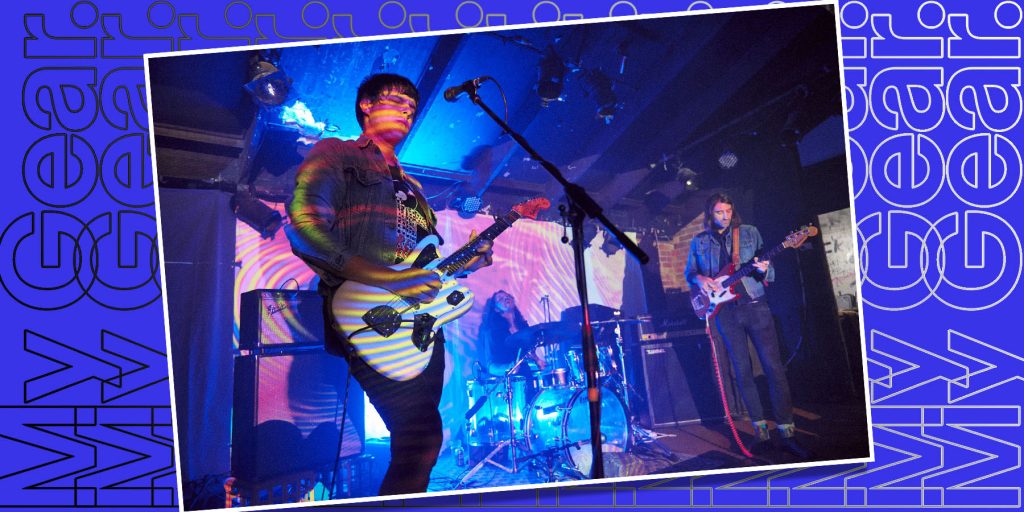 Anyone remotely familiar with the vibrant Melbourne psych scene will have their eyes light up at the mention of Buried Feather. The fuzz-drone gurus know how to bring the goods when it comes taking ones’ ear across the soundscapes of tape delays, phasing fuzz and driving rhythms. In a rare opportunity, we got the insider details from Jim (bass), Steve (guitar/vocals) and Cal (drums) on their live gear and some other favourites they use in the studio, which feature in their latest LP Cloudberry Dreamshake.

Jim – My current set up is a little 1966 Fender Mustang Bass (Candy Apple Red) into an early 70s ‘Silverface’ Fender Bassman amp. I don’t really use many pedals or anything. Just a PC-2A Optical Compressor (always on) and occasionally an EHX Green Big Muff for fuzz parts.

Steve – I play a Fender Jaguar through an early 70s Bandmaster Reverb. I always have a bunch of different pedals at my feet, but the essentials are my Fulltone wah, a Tym Violet Rams Head big muff clone and a delay pedal. Recently I’ve been using a Catalinbread Belle Epoch Deluxe which is modelled on the Echoplex EP-3 unit. The preamp section in it is great. I also have a box for running on stage effects for my vocals –  I have a Boss Space Echo and a reverb pedal in the loop. In terms of favourite gear, I’d have to say my Jaguar. It’s a USA ‘62 reissue that I’ve customised with some help from my mate Ryan at Colourtone Guitars. Every time I pick it up I’m excited 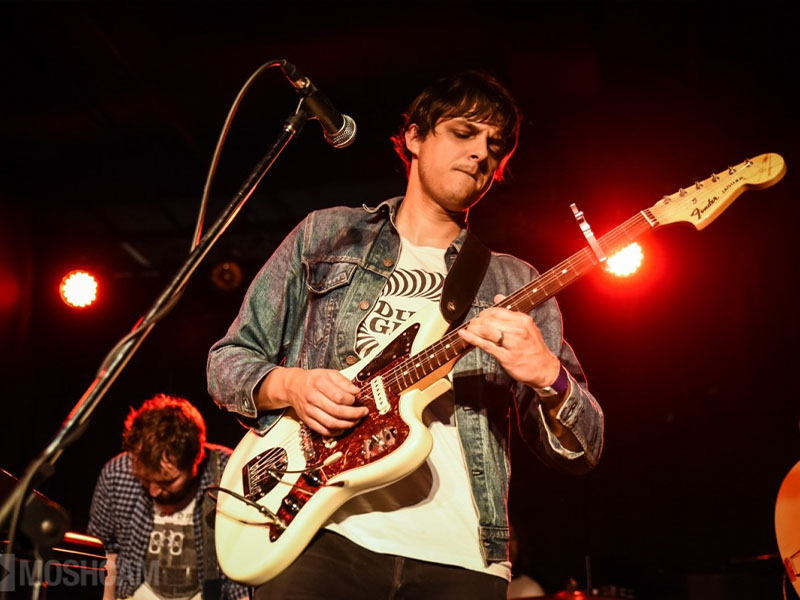 Does your live gear differ from you recorded music/being in the studio?

Jim – Yeah, you’ve obviously got a lot more options in the studio so you can mix up guitars, amps etc a fair bit to suit the song. I’ve got an old (1959) Hofner President Bass I don’t gig with that much anymore but still, use a bit (together with the Mustang and a few others) when recording.

Steve – I mix it up more in the studio in terms of using different guitars and effects. On our new album, I used Jim’s Epiphone Casino on a few songs and a 12-string Rickenbacker. I like to use different fuzz boxes as well – I have an Analogman Peppermint Fuzz that is awesome to record with. I also used my Fulltone Tube Tape Echo a lot on the new album, but have stopped lugging that along to shows.

Cal – I usually play around with different snares and drums for recording. On Cloudberry Dreamshake I used a 1970’s Ludwig kit with a bunch of different cymbals and snares etc. 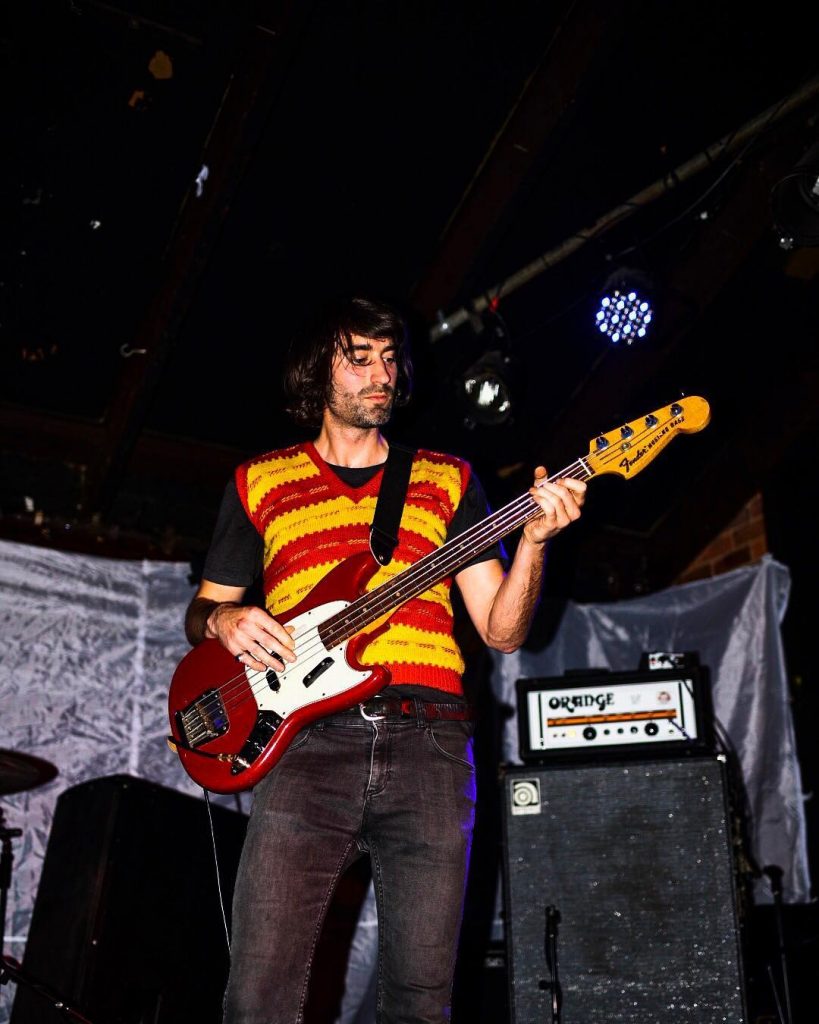 Jim – Not particularly personally, I think certain players will always sound like ‘them’ no matter what equipment they use. I always prefer tube amps and generally play flatwound rather than roundwound strings though so perhaps that’s part of it for me.

Steve – I’m inclined to say no because I could replace my gear with different stuff and still find a way to get my sound… But gear is definitely important in creating “our sound” for Buried Feather. We like creating a hazy, spacey kind of atmosphere – you need the right tools to get you there.

Cal – I would say cymbals are definitely integral but I’m pretty versatile when it comes to live shows. if I don’t have to take the kit that’s always good! What was the first piece of musical equipment you ever bought (or came into contact with)?

Jim – I can remember my dad had an old banjo that lay around the house that I noodled around on a bit as a kid. My Hofner (500/5 President Bass) used to be his too, so I’ve had that with me for a long time now.

Steve – I remember buying a really cheap Epiphone electric guitar in my early teens. I think it was a Les Paul studio type thing. I thought it was really cool.

What would be a dream piece of gear you would love to own?

Jim – A 1950s P-Bass (like what Ronnie Wood plays on early Jeff Beck Group records) is probably a dream piece of gear for many bass players. I’ve had my eye out for a vintage Hofner Club Bass for a little while too.

Steve – I just bought an early 80s Greco 335 copy so just getting to know that right now. I’d like to get a nice Epiphone Casino at some point and have been thinking about buying a Marshall JTM45 for a while… But to be honest I don’t spend enough time playing the gear I already own, so no point buying more.

Cal – A really nice vintage Rogers, Ludwig, or a custom oak kit by entity drums. He is a local Melbourne guy who makes really nice kits out of solid timber – check him out!

We’ve just released our 3rd studio album – Cloudberry Dreamshake (out through Cobra Snake Neck-tie Records in AUS / Kozmik Artifactz in EU/UK) and are playing a handful of shows (including Kyneton Music Fest) in support of that.

The Melbourne launch is Saturday 19th October at The Gasometer where we’re joined by a stellar line-up of special guests – Mesa Cosa, Turtle Skull (NSW) and Brown Spirits.

“Cloudberry Dreamshake marks the 3rd album by Melbourne’s Buried Feather, and a most welcome follow-up to 2017’s absolutely scorching ‘Mind Of The Swarm’. Where the latter relied heavily on fuzzed-out drones and deadly licks, Cloudberry Dreamshake turns its gaze towards the songwriting and sounds of late 60’s British psychedelia to further broaden their sound. Executed as usual with just the right amount of reverb, fuzz and spaced effects, this is a real deep journey. Highly recommended!” – Sly Vinyl

For everything Buried Feather, check out the links below. 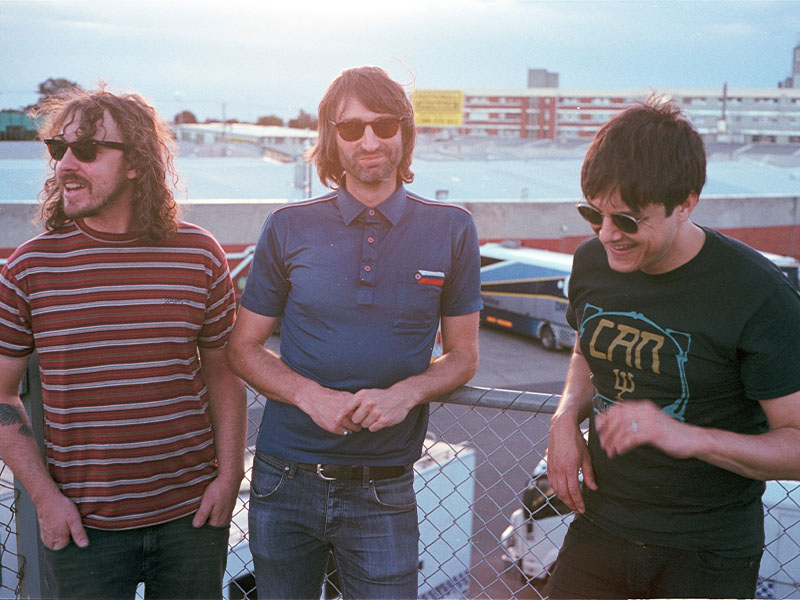