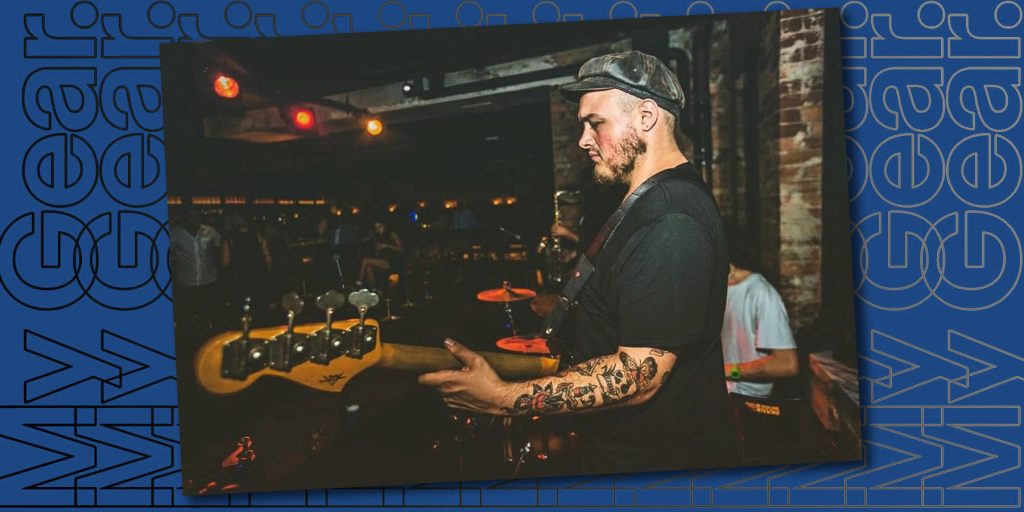 Whether they’re a gear nerd or a gear noob, the type of gear an artist uses has a huge impact on their signature sound. In this regular series called My Gear, Noisegate picks the brains of exciting and diverse artists for a behind-the-scenes scoop on their musical setup. Caleb Shand is an in-demand Australian session Bassist who has worked extensively with artists such as Remi, Harts, Thando and Billy Davis just to name a few. Caleb was kind enough to take some time to answer a few questions about the gear he uses on stage and in the studio.

What piece of musical gear do you reckon you couldn’t live without?

In the studio: my EBS valve drive!

You load into the studio, palms are sweaty, knees weak, and arms are heavy. You’ve optimistically lugged 50kgs worth of bass amp up two flights of stairs only to be welcomed with the phrase “you won’t be needing that today.” It’s the engineer’s way of saying “we don’t have an isolation booth for the bass amp.” Fighting back tears, you reach into your European Carry-all and what do you find–your EBS Valve drive to the rescue!

I use it to warm up my tone, string noise and pick click go smooth like butter. I feel like it just sits better in the mix. In an ideal world, I’d achieve that by miking up an amp but it’s not always an option with time, space and noise constraints. The valve drive emulates that amp sound really well. Subtle warmth all the way up to valve melting grit. It’s been a lifesaver on so many occasions! Especially when I’m getting into that high gain territory.

On stage: my trusty ol’ Aguilar Octomizer goes everywhere with me. When my foot drops, you know I’m about to play substitutions so questionable that your mum will say “I don’t think you should be spending so much time with that boy.” You’ll see me waving my head around like I’m trying to catch invisible Cheetos in my mouth. It’s tough, it’s fat, it’s everything an octave pedal should be.

What’s the best purchase you have made?

Best: my first P bass. I played active 5 string jazz basses for about 10 years before I woke up and thought– I should get a P bass with flats. Everything changed after that. My playing had to drastically evolve to accommodate the thumpy new sound. None of my old tricks really worked so I had to learn a bunch of new ones, it felt like I was fighting with one arm tied behind my back.

I’ve gigged just about every bass you could think of since then. New sounds force me to play in new ways. I really enjoy the challenge of constantly reinventing my approach to playing. That P Bass started a massive tonal journey for me. It made me realize that different gigs require different sounds. Prior to that, I was a bit of a one-trick pony.

What pedals and FX do you use, why do you use these particular units?

The voicing of the lower octave sounds clean to me, it replicates the tonality of the unaffected register really well. A lot of other pedals sound synthy like the Boss OC-2, a quality that I love but don’t necessarily want in my workhorse octave pedal. The octave filter dial is a game-changer, I can get that intrusive, rude, pokey sound or dial it back for that 808 sub thing.

My second favourite pedal. It’s complicated as all hell but I love it. Envelope filter, gated fuzz, octave pedal all in one. I’ll use it at some point in nearly every show that I play. It’s what I grab when I hear a wild sound that I need to replicate, it never fails to deliver.

I use this as a synth pedal. Crank the Oct 1 dial and zero out everything else. It’s super warm and earthy. I’ve got a Red Witch – Zeuse that I use for the same purpose.

Everything I love about the big muff except they’ve added a “Dry” signal dial. Having a blend keeps the sound dynamic and fat.

It’s a little bit fiddly but that’s part of what makes it great. It’s versatile enough to pull any envelope sound that pops into my head. Getting all the settings right can be a bit of a mission, but it’s always worth the trouble.

I use dull strings on a lot of my basses, it lets me open up the tone dial while avoiding all the harsh top end that comes with fresh round wounds. The main compromise there is the lack of sustain, that’s where compression comes in. The cali76 is cool because I can dial in that sustain while blending in the dry unaffected signal. It’s the best of both worlds, dynamic and natural with a squashed, long sustain undertone that carries those long notes. 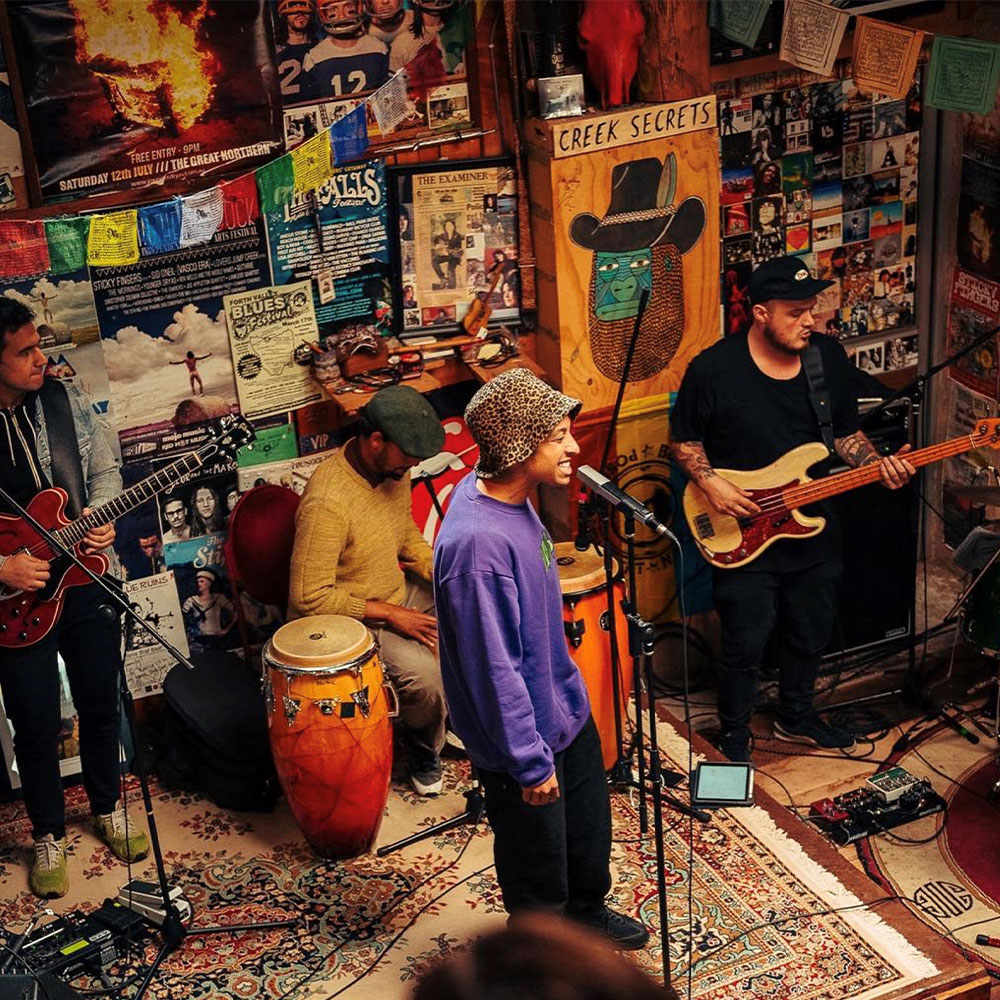 What gigs do you have coming in the near future?

I’m currently tracking bass for “The Cb3” an instrumental guitar trio fronted by Cristian Barbieri. It’s been pretty wild, three guys in a studio tracking 5-8min songs live. I don’t think I’ve ever walked out of a session feeling so accomplished. It’s just so damn inspiring to make music with guy’s that I really gel with, everyone playing on the edge of their ability and nailing it.

I’ve got a bunch of stuff coming up with Harts. We’re playing Caloundra Festival with Harts plays Hendrix and a 2020 Harts / Hendrix tour in the works. I’ve typically been called for Neo Soul, Hip Hop, RNB gigs in the past. It’s been really fun to delve into the classic rock territory with this Hendrix show as well as the Harts originals shows.

Later in the year, I’ll be doing some dates with Thando, I’m super excited about that! I tracked bass on some of her more recent recordings and it’ll be great to work with her more in a live setting.

I’ve been incredibly fortunate to play with so many great artists this year. I was looking at my calendar on New Year’s Day thinking “I’m officially washed up at the age of 29” that moment lasted for a whole of 10 seconds before a tsunami of calls hit my phone. I did a few things with Remi in February. I actually ended up playing that set with the band for the first time, live to air on PBS. Time was a little tight and rehearsals weren’t really an option. In between that, I was trying to prep for a tour with Andrew De Silva’s prince show “Purple Revolution” in March. Two hours’ worth of Prince tunes, my head nearly exploded. Shortly after that, we started rehearsals for the “Harts Plays Hendrix” show along with a couple of Harts shows. It’s been a wild ride, I’m really excited to see what else pops up this year.

Check out some of the videos featuring Caleb on YouTube