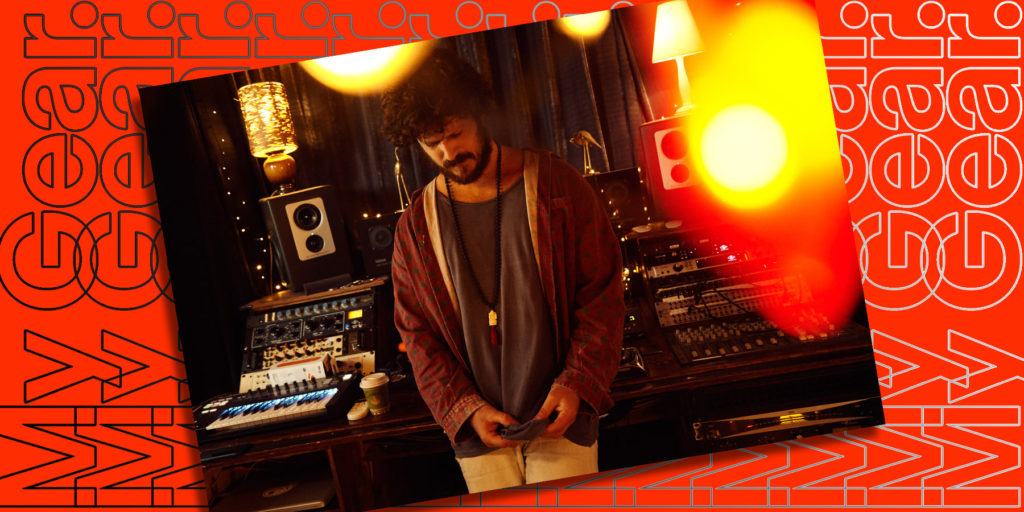 Dan Frizza is a producer, engineer, mixer and musician based in Sydney. With credits stretching as long as the Hume Highway and having the opportunity to work with artists such as George Michael, Amy Shark, Daniel Johns, Delta Goodrem, Xavier Rudd, Gurrumul and Bernard Fanning to name but a few, Dan’s wealth of studio experience speaks for itself. When not busy behind the console, Dan takes to the stage as the synth/drone mind melder of “flower/doom” psych lords Turtle Skull. Having worked in some of Australia’s most iconic studios Dan also works tirelessly out of his own recording studio creating records with some Australia’s finest underground psych, indie (and everything else in between) bands and artists. In amongst his packed schedule, Dan kindly gave Noisegate a glimpse into some of his favourite pieces of studio and live gear. Let’s tuck in!

So, what’s your piece of studio and live gear and why do you reckon they’re awesome?

STUDIO GEAR: In the studio I can’t seem to go without my old Reslo RV Ribbon Mic. These are made in England and were pretty popular in the ‘60’s, I think you can find photos of John and Paul from The Beatles singing into these guys. Anyways, I stumbled upon a particularly old and juicy little fella and it hasn’t been able to leave my side since. I’ve found it a necessity for my drum tones using it as a bit of a kick/snare crunch mic, being a figure 8 polar pattern I can place it so it simultaneously picks up the sub of the kick and crack from the snare. Followed by slamming through my (Universal Audio) 1176 compressor with all buttons in and patched straight into my UAD Apollo interface tends to find me in a pretty good place. I’m not exactly sure what it is but there’s a particular body of tone this mic produces, especially when distorting, that’s just like a warm dollop of cream. I have put so much trust in that one mic it could probably be the one mic I would use if I had to only use one.

LIVE GEAR: When I play keys in my band Turtle Skull, I use a Korg Minilogue and a Microkorg. Although both these synths are super powerful the Minilogue is so good. It’s the first synth I’ve ever bought and being a little analogue based gem and me being a novice synth guy I find it really easy to find sounds I’m looking for, I also love using the sequencer to set drones.

Hell of a signal chain and awesome synths you’re using. Have they influenced your sound/mixing/live process?

STUDIO GEAR: The Reslo has opened doors of tones I didn’t know how to find. I remember hearing that King Giz record “Quarters” and loved the drum sound on that, I feel like this mic has allowed me to find the tones I was hearing on that record.

LIVE GEAR: The Minilogue gives body to the sounds I hear in my mind, although I feel like I’m constantly looking for (Roland) Juno-esque style sounds this has the ability to go there and also find more aggressive tones too. Its also been a handy tool to have in the studio if there’s a track I’m working on that just needs a little sparkle here or there I’m able to just grab that synth and find the sound almost instantly.

Wicked! How have you integrated it into your studio/production/live rig?

STUDIO GEAR: Well I now own 3 Reslo mics after the first having such an effect on me! I use them mainly for guitar amps and on drums but also have used them for vocals and acoustic guitars too. They are low gain mics so tend to get noisy quickly but who doesn’t like a bit of noise.

Very tasty indeed. Have you modified them at all? Why?

STUDIO GEAR: The Reslo’s I haven’t no, but I did just purchase one from some guy over in the UK who mods old ribbon mics, his business goes by the name Xaudia. I believe the one I bought had been re-ribboned and had a higher output transformer installed so I can now use it on guitar amps or vocals without any, or maybe as many noise issues.

LIVE GEAR: The Minilogue, in a way yes, I got a bunch of patches online and they’re super trippy sounds I didn’t think were possible with that synth. I think there’s about 400 or so that I bought but the synth only has space for 200 so I definitely sat down one night and went through every single patch to see if I wanted to load it on or not, which patch to replace it with and how to deal with the dilemma of not enough space for every patch! A long but worthy exercise.

How did they come to be yours?

STUDIO GEAR: The Reslo was initially a gift from a guy called Richie B from a studio I worked from for a while called Free Energy Devices. I think he understood my influences and showed up one day with this mic in hand, he understood me pretty well I think!

LIVE GEAR: When we were making the first Turtle Skull EP Dean the guitarist/vocalist showed up with one of these synths he borrowed from his brother. We plugged it in, hit one note and both looked at each other and nodded in agreement. I needed firstly to learn how to play a synth and then also play this one.

What a great moment. Lastly, what’s in the foreseeable future for you?

STUDIO GEAR: Well hopefully many great records and gigs. In the studio I’ve got the new Turtle Skull album which I’m about halfway through mixes for. I’m also well underway with Zeahorse on their new record and working with Doom/Psych lords Comacozer on their new record also.

LIVE GEAR: Turtle Skull have got a few gigs coming up. We’re playing “Front Yard Noise” at Park House Food & Liquor in Mona Vale on the 18th January. On the 19th January we’re playing with Sydney legends The Laurels at The Lansdowne alongside Richard In Your Mind and Hotel. Then in April we’re playing Mojo Burning up in Queensland.