Neil Hawker is a Melbourne-based singer, songwriter and guitarist is on a mission to bring his own r&b-based blues to the world. Neil released his debut solo album ‘South By East’ late last year, and has also been working with band members from the likes of ‘Pickpocket’ and ‘Off the Leash’. We took time out to chat with Neil to find out what piece of gear he relies on to get the sound he is so meticulous about.

Ibanez TS9 Tube Screamer – modified. I bought it at a music store in Lismore NSW, probably around 2001. A staple product for millions of guitar players!

When I moved to Melbourne in 2003, I heard that Dave Ulbrick was doing TS9 to 808 conversions, so I had that done. The main difference I hear, after the ‘chip’ was put in (if that’s what he did; I have no idea, haha), is that the top end is smoother and compresses a bit nicer at louder volumes.

What makes you keep coming back to this piece of gear?

It’s just so reliable, and the main thing is that it lets the guitar sound the way it should. It’s got transparency. I was using an MXR GT-OD for the blues stuff for a while, with the Tube Screamer on my bigger board for gigs I sometimes do in a more ‘funk’ or ‘fusion’-like style.

But as great as the MXR sounds, I decided it was more appropriate for the music to swap them back; the GT-OD can get quite gnarly on the bottom end if you’re not careful with your amp settings, whereas the TS9, again, lets the guitar and the amp do their thing. To me, that’s what the blues needs, especially as I’m mostly using the pedal as my ‘overdriven’ amp—as in, it’s on all the time— in conjunction with a clean-set amp like my Supro Saturn Reverb or my ’71 Fender Deluxe Reverb, whilst using the guitar’s volume knob to control gain.

Having said that, if I’m in a situation where I can crank my amp for a bit of grit (especially the 15-watt Supro), I’ll do that, and use the Tube Screamer for a more cascaded boost. I’ll still be using the guitar’s volume for cleaning it up. 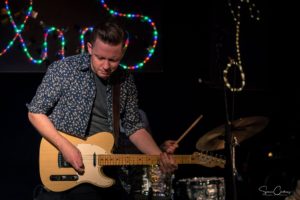 Yes – if you do have an amp that you can crank a bit to get most of your gain, use an overdrive pedal like the TS9 in the opposite way: turn the pedal’s gain down to ‘0’ and its volume up all the way. This is pretty common amongst metal players with high gain Marshalls, Dual Rectifiers and the like; the overdrive pedal is really a solo boost. Us blues guys often do the same thing with much lower-gain amps.

I’m continuing to gig around Melbourne venues over the next six months. In the meantime, I’m getting another writing itch, having released my debut album in November 2017.

I have a few ideas about the direction of the next music, since releasing “South by East”, but I won’t say anything yet in case I change my mind!