JBL, with a long and storied history in building studio monitors, have a product to suit every level of budget and spec. What’s unusual about JBL’s range is that the R&D and tech that goes into their top-of-the-line products makes its way through the entire catalogue. While you obviously get incredible performance when shelling out for high-end studio monitors like the flagship JBL M2s, you might not expect it when selecting a budget pair of powered monitors for a home studio. But thanks to JBL’s policy of incorporating everything they learn in the lab into the whole range, that’s exactly what you get. Let’s take a look at how you benefit from their R&D, from humble beginnings right through to the top end of town….

We all start somewhere. For most of us, that’s in a bedroom or a garage, or anywhere else you can carve out a space to record and produce. Being able to hear what you are doing is essential to creating viable work, no matter the genre or style. When you’re just starting out, though, your room and your budget are both conspiring against you to make it hard to hear what you’re doing. You need monitors that are honest while being forgiving of where they’re being used.

This is why JBL incorporated the Image Control Waveguide, developed for the M2s, into the 3 Series MkII of powered monitors. The Waveguide makes the ‘sweet spot’ where you’re getting perfect high-end and stereo imaging a much larger physical area than other monitoring technologies. This will really help when you’re sitting in the only place in the room that it’s physically possible for you to work, not having the option to either knock out walls out or carve soffit-mounts into them. The Waveguide also smooths the response through the crossover point between the tweeter and woofer, eliminating peaks and phase problems that are typical when two drivers start overlapping. Another acknowledgement of the environment these monitors were designed to work in is the Boundary EQ feature, which reduces the low-end boost you get from the bass ‘loading’ created when you position monitors too close to walls or other hard surfaces, like desktops, which you’re almost certain to have done, right? At the other end of the frequency spectrum, a HF Trim switch gives you 2dB of gain or attenuation to compensate for ‘too dead’ or ‘too reflective’ spaces.

While adopting tech from the M2s where applicable, JBL also custom-designed new transducers and amplification to fit the 3 Series MkII’s spec. The class D amps were engineered to match the woven-composite 1″ Neodymium tweeter and each woofer perfectly, and a JBL Slip Stream low-frequency port built-in to extend bass response and accuracy.

The 3 Series MkII is available in three sizes; the 305P MkII with 5″ woofer, 306P MkII with 6.5″ woofer, and 308P MkII with 8″ woofer giving you multiple options depending on your available space.

Immersive mixing, surround sound, and industry-standard playback formats like Dolby Atmos are forcing traditionally stereo-based mixing environments to adapt and fast. Notably, companies like Netflix only accept material mixed in Atmos. Any studio looking to produce content for streaming and even web needs to mix and monitor in a multi-channel format, or even ‘multi multi-channel formats’. As the market demand increases, many non-standard spaces (i.e. not purpose-built studios) are being used for multi-channel production. And so we see the same challenge given to the pros as was to the amateur – mixing in a room not designed for the task, with an added degree of difficulty due to the need for extra SPL for surround speakers on distant walls to hit the ears of the engineer at the mix position.

The Image Control Waveguide comes to the rescue again in the 7 Series, forgiving of off-axis mix positions and smoothing frequency response across the vocal range. Its managing of phase response helps control not just signal from the two drivers in each cabinet, but the overlapping responses of multiple monitors in a room. The fact that the same Waveguide is employed across different models helps installs utilising different sized monitors for mains and surround stay in-phase and tonally consistent. As such, the 7 Series can be used as surrounds for systems with M2 mains and more than hold their own in terms of frequency response and SPL.

To hit the high SPLs and low distortion needed to throw across a room from the back corners, JBL has included the new 2409H high-frequency compression driver in the 7 Series, which features an innovative low-mass annular diaphragm. Because it’s a compression driver, and not a dome tweeter as commonly found in comparable monitors, it doesn’t need the limiting and protection that can throttle output. This enables the 7 Series to reproduce frequencies with a smooth response and low distortion beyond an incredible 36 kHz! 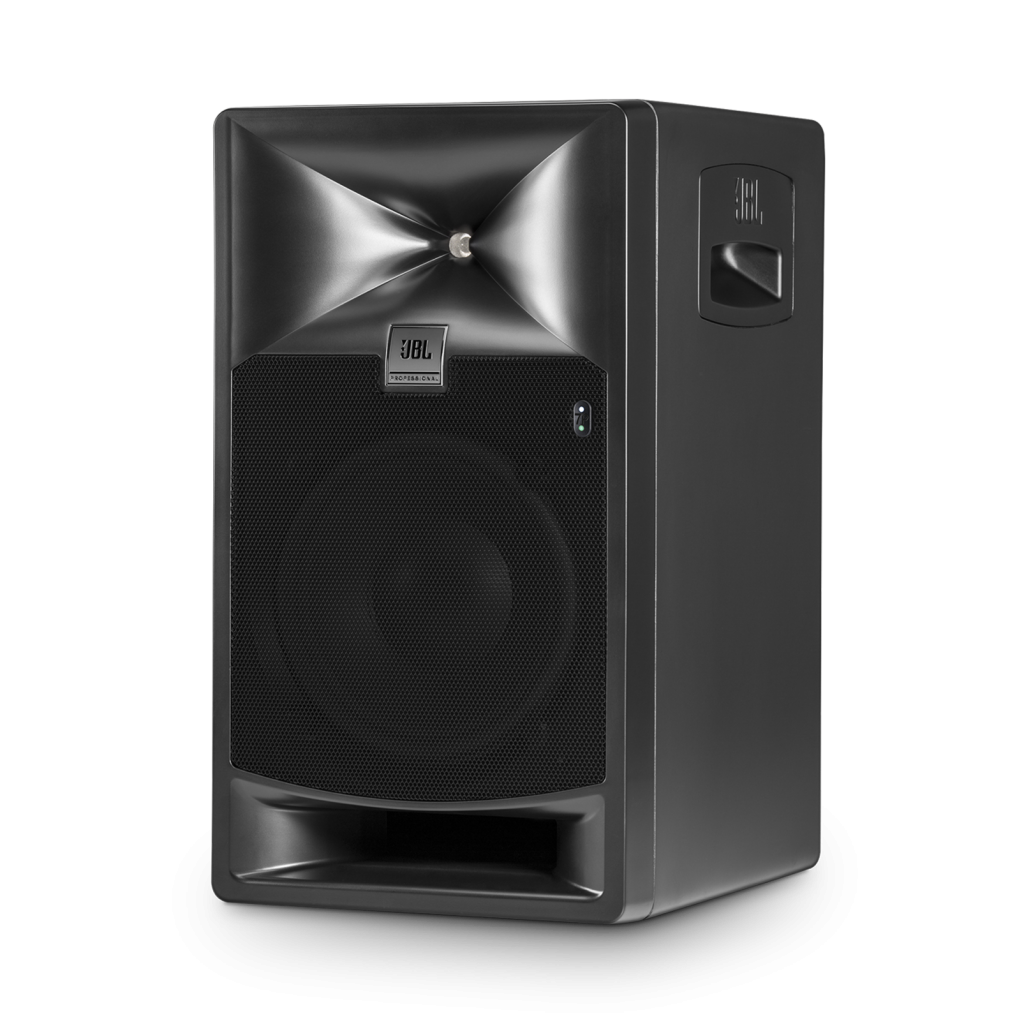 There are four models in the 7 Series; the powered 708P (8”) and 705P (5”), and passive 708i (8”) and 705i (5”). For fitting onto hard-to-install walls and ceilings, the passive option is an obvious advantage, and can be bi-amped for extra control. All models are have top, bottom, and rear mounting points, and support horizontal and vertical positioning. Installers will appreciate the Phoenix connectors on the back for easy cable termination.

The powered 705P and 708P have built-in DSP with integrated EQ and delay, which can all be set and controlled via Harman’s HiQnet software via the network port. If you want to keep signal in the digital realm all the way to output, there’s an AES/EBU digital input on XLR (plus a pass-through) that will take AES signal with sample rates up to 192kHz.

If you find yourself mixing to M2s, you will finally appreciate where all of JBL’s R&D budget went. A ‘Reference Monitor’ in every sense of the word, these two-ways can produce 123dB at 1m and have a frequency response of 20 Hz – 40 kHz, covering the entire range of human hearing plus another octave on top. Standing 1.256 metres tall, they are an undeniable presence in any studio and were engineered, like the rest of the new JBL monitoring range, to work in non-traditional mixing spaces.

This is why the Image Control Waveguide was developed; to make the M2s practical in the high-end converted barns, cottages treated rooms and converted inner-city warehouses that have become the day-to-day reality of big-budget audio production.

Running the specially developed D2430K Dual Diaphragm Dual Voice Coil Compression Driver and 2216Nd 15 in (381 mm) Differential Drive Woofer, the M2s crossover at an intriguingly low 800Hz – a figure we’re seeing more and more across the pro audio realm, including in JBL’s A-Series line arrays, as well as some of their competitors. Why are we crossing over our loudspeakers almost an octave lower than in previous designs? JBL is tight-lipped, but the effect it is having is increased vocal clarity and better mid-range performance with more perceived available spectrum in the mix. 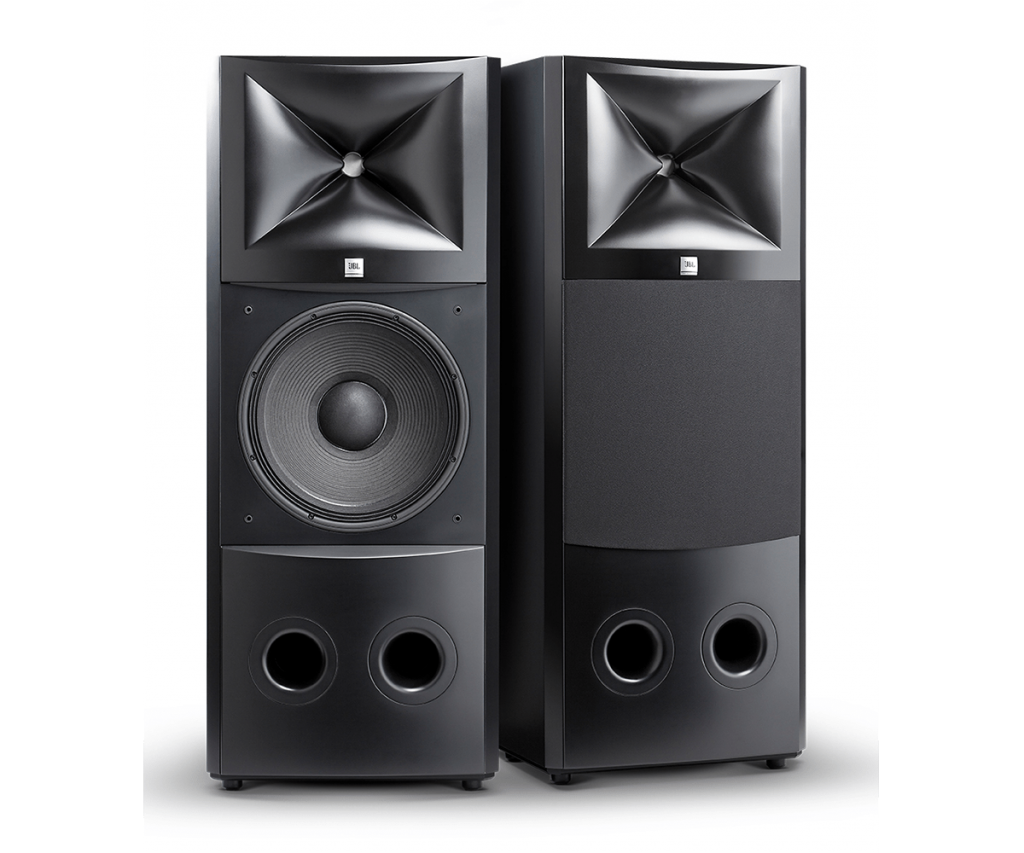 JBL has shown incredible vision in producing a monitoring environment that not only works across budgets and spaces but also across multiple output formats and system designs. The 3, 7, and M2 Series can be used as stand-alone monitoring systems, or together for flexible surround mixing in just about any space. A familial tonal response means there are no jarring differences when moving from the coverage pattern of one model into another, and the Image Control Waveguide harmonises top-end and phase response across the range.

Tied together with network control via Harman’s HiQNet, and managed with tuning and format switching tools like the JBL Intonato 24, JBL and the Harman environment are a complete solution for audio monitoring, from bedroom dreamers to high-end post-production masters.