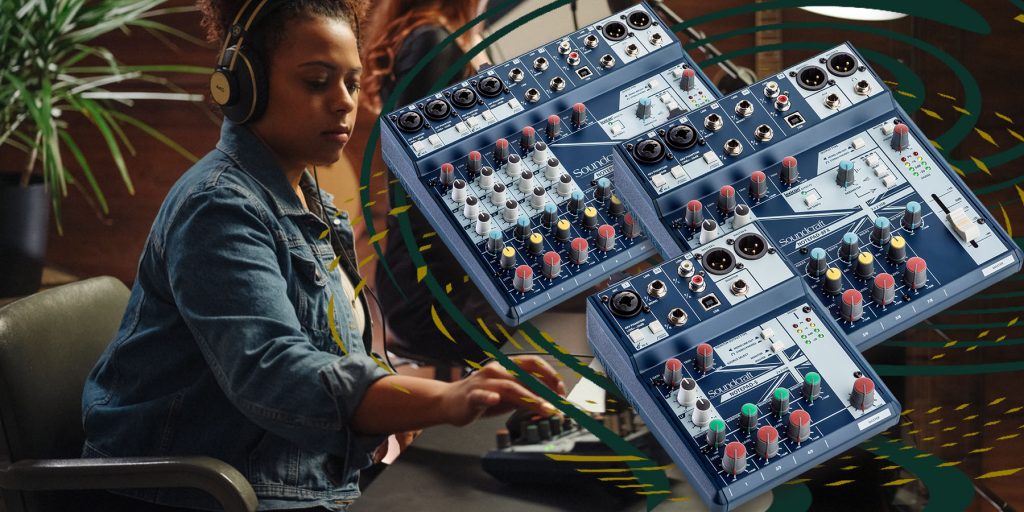 True Crime? Geek Out? Fashion Forward? Anyone can make a top-quality podcast if you’ve got the passion and the inspiration. The gear to record and mix professionally has never been more accessible or affordable, with no obscure technical expertise needed. All you need to add to your laptop is some mics and a mixer and away you go. The only hard part is choosing which mixer and mics to buy; a simple web search is going to show you have waaaay more options than is reasonable, so let’s cut through the noise by posing some questions that will show you which way to go.

The most important question is; how many people are going to be talking at once? It could be just you, you and a guest, or a panel discussion. Think ahead to the maximum amount of people you think you’re going to be speaking to at once and plan for that.

A solo podcast or conversation between two people is pretty easy to plan for – you’re going to need one or two microphones respectively, and a small mixer that can cope with that. Panels, group discussions, and full band interviews are harder to gauge because you’re really asking ‘how long is a piece of string?’ You’ll either need to set a limit on how many people you incorporate into a show at once or stage-manage your workflow.

For example, let’s say you gear up to produce a podcast where up to six people can talk at once, those six being yourself and five guests. Then you invite a band for an interview that has six members. The easiest solution to this is setting up the mics so they’re easy to share, and show the band how to get on the nearest mic when they want to speak. To keep levels and tone consistent, with the least noise, you want everyone who speaks to be the same distance from the mics they’re speaking into.

If you or your podcast subjects need to hear yourselves, headphone monitoring is the best solution. This eliminates any feedback or delay issues. Your chosen desk will have a headphone/monitor output if it’s just you recording. For interviews with a host and interviewee, you could do without monitoring if you’re comfortable, or just monitor the recording via the computer.

If you’re going to do any capture of music ‘live at the podcast’, all of your musicians are going to need headphones, as is the sound technician (which is probably you.) You can achieve this by running from the aux out of the mixer to a headphone amplifier, which has multiple headphone outputs for the musos. You can maintain a separate monitor mix for the engineer off of the desk’s main monitor out.

You can use just about any decent microphone for podcasting. It doesn’t need to be a high-end, expensive studio mic, nor extra-rugged like some stage mics, or have any fancy pick-up patterns. Mics that can carry out multiple duties are a good investment; stay away from anything gimmicky. For speech and most instruments, a good quality dynamic mic with a cardioid or hyper-cardioid pickup pattern will be perfect. Something like an AKG D5 is great – it suits voice, and you could happily use it on acoustic guitar, and even live on stage.

There are multiple computer programmes available that will record stereo or multitrack audio for your podcast, some paid, some free. If you’re considering podcasting, you likely already have an audio programme you use regularly, so we won’t go into details on what’s available here.

The Soundcraft Notepad mixer series comes with a USB interface that you can connect directly to your computer. It works natively on Macs, and PC users just need to install a driver. When connected, select the mixer as the audio driver in your software’s interface, and signal will be available to patch to your recording channels.

After you’ve decided on the basics above, it’s time to pick the heart of your system – the mixer. Here’s each option from the Soundcraft Notepad range, which are perfect for this application:

The Notepad-5 – For the solo ‘caster

The Notepad-5 can take one mic or instrument input through an XLR or balanced jack cable, with a high-pass filter to eliminate ‘pops’ and simple two-band EQ to sweeten your voice. You can run an additional two stereo line sources in via jack or RCA to mix other recordings or music on-the-fly, and route your computer’s output back into the desk. There’s an out for your headphones to monitor with zero latency, and XLR outs for your speakers. The USB out is right on the top, for a straightforward connection to your computer. The Notepad-8FX– The Interviewer and Guest Stars

The Notepad-8 gives you two mic inputs, one with instrument switch, and both with high-pass and three-band EQ. Three stereo line inputs are available, two via jack and one via RCA. There’s a completely separate aux bus to mix each channel individually, with its jack output to send out to a monitoring system like a headphone amp or simply press the dedicated switch to make it a second headphone stereo headphone output. A Lexicon effects unit lets you add reverb, delay, or chorus to your musician’s performance.

Going up in size to the 8 adds a dedicated master fader, in addition to the same headphone out, plus XLR master outputs, and USB out as the 5. The Notepad-12FX – Ready for Anything

The Notepad-12 scales up to give you four mic inputs on combo jacks, two with instrument switch, again with high-pass and three-band EQ. For polished band mixes, there’s an FX return input on jacks for routing your external units without taking up one of the other three stereo line inputs. Like the 8, a built-in Lexicon FX unit can be used for reverb, delay, or chorus. Outputs include the aux (switchable to a second headphone output), mains, headphones, and USB.