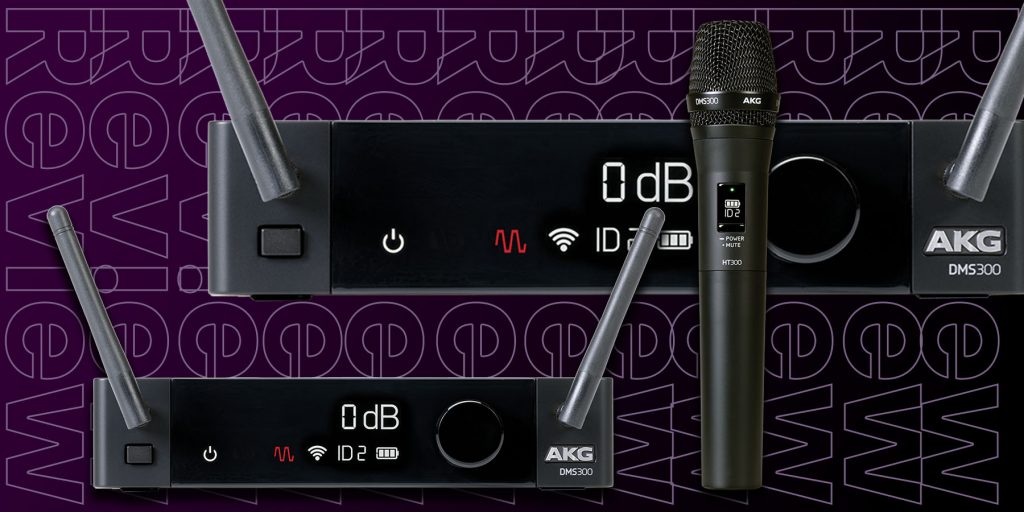 Ever thought how great it would be to jump into the crowd at your gig, microphone or guitar in hand, crowd surf to the back of the venue, then back to stage, all without a hitch and free of cables? Course you have, that’s wireless! A new line of digital wireless systems from AKG, the DMS100 and DMS300 recently landed at Noisegate for trial, and we were left pretty darn impressed about these affordable units.

Both the DMS100 and DMS 300 systems are available as either a handheld or instrument set depending on your application and you can use a maximum of 4 separate DMS100 units simultaneously and a total of 8 DMS300 units. The RJ12 connectors on the back of the DMS300 receivers make for lightning-fast setup and channel allocation with multiple units. What’s more, you’re able to combine the DMS100 and 300 systems together for a grand total of 12 units running together in harmony.

Both systems operate on the licence free 2.4GHz frequency range, and for all the anti-digital naysayers, there’s some impressive technology under the hood to help alleviate the 2.4GHz heavy traffic dilemma, but more on that later.

Audio resolution is nicely detailed at 24-bit, 48kHz and latency is spec’d at an incredibly low <=2.9ms. These systems don’t just have the musician in mind, they are also ideally suited for corporate and government applications due to their AES 256-bit encryption, protecting signal and keeping things private and confidential.

The handheld transmitters for each system are equipped with professional quality AKG P5 capsules, and each belt pack in the instrument sets come accompanied with a mini XLR to 1/4” cable for direct connection to a guitar (or keytar for the 80’s enthusiasts), a nice touch. Both handhelds and belt packs are powered by 2 x AA batteries with a maximum of 12 hours of battery life. Operating range is spec’d at 30 meters line of sight, but when we tested the DMS300 system we were pleasantly surprised with the results we uncovered, more details on that in a bit. 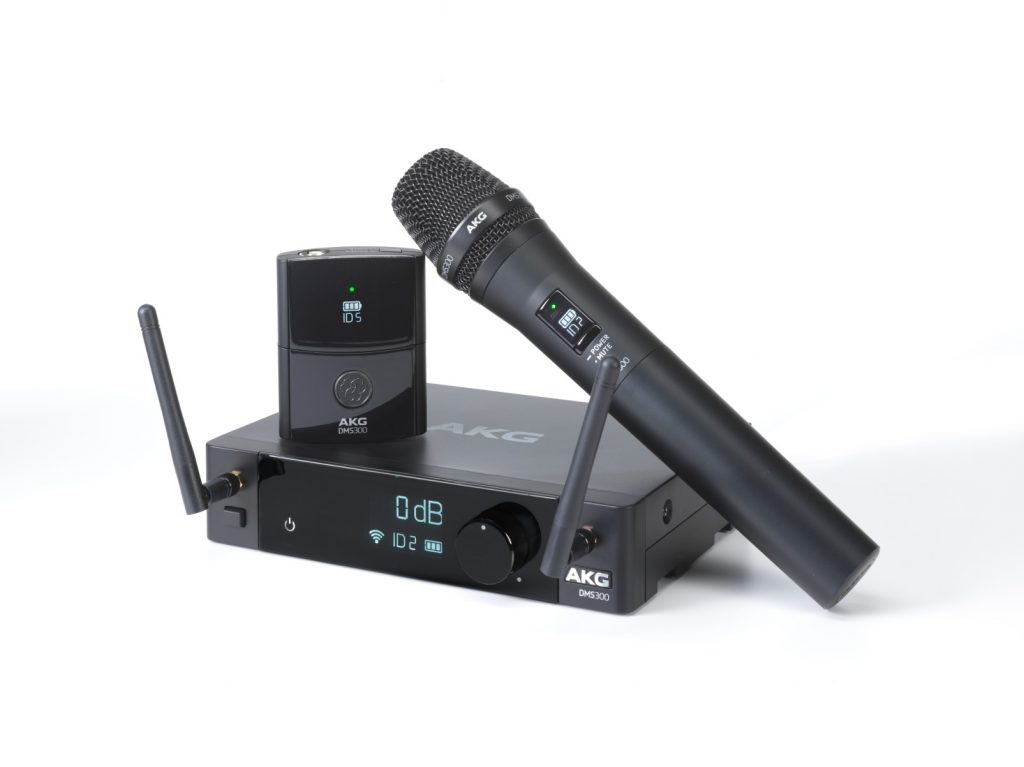 Upon opening and setting up each system, the DMS’s sleek and elegant design was immediately apparent. With high resolution LED screens on each receiver unit displaying all essential info including channel ID (numbered for the DMS300 and colour indicated for the DMS100), RF signal indicator, a signal clipping indicator, low battery indicator and a nice dB level displayed for the DMS300.

The simple yet sophisticated operation of pairing these systems saves you from nightmarish wireless pairing scenarios. We found it very quick and easy to get each system up and running. With quite literally the click of a button on the receiver and transmitter, and voila, paired, no trawling through menu’s here folks. And this is where the DMS systems cut through the 2.4Ghz spectrum like a hot knife through butter. The proprietary adaptive frequency and channel selection technology allows these systems to automatically scan and allocate to an available frequency and channel, meaning minimal interference, and lightning-fast setup and deploy.

Although more on the prosumer end of the spectrum and unlikely to be used on a stadium-sized gig, we still wanted to push the DMS systems to the limit and test them within (and beyond) the bounds of real-life applications.

In an auditorium with an approximate length of 20 metres, each system performed without a hiccup. Latency held up with no perceived delay, nor was there any noticeable degradation in audio quality. We then decided to take the handhelds for a walk outside, a wall sandwiched between receivers and transmitters line of sight. Surprisingly, until we reached around 30 meters of distance, communication between devices remained healthy, with only a little perceived latency; as to be expected when pushing to this sort of extreme.

We then decided to take our wailing (and we say that very lightly) guitar, strapped with a DMS300 belt pack across to the next building, up the stairs and gazed out the window to the auditorium. We expected signal lose when walking between the two buildings and that would have been that, but to our utter surprise signal remained for the whole exercise with the audio quality as smooth and pristine as it was when in the same room as the amp. Albeit a smidge of latency was detected at this extreme but never the less, it seemed even between buildings these systems were destined for connection.

Our time spent with the new DMS wireless systems concluded that these new pocket rocket systems provided simplistic setup and operation, supreme audio quality, lack of interference and really quite impressive results when pushed to their limits and further. The nice thing about them is their versatility and a broad range of applications. Aside from the obvious use for musicians, you’d expect to see these in schools, lecture halls as well and the aforementioned corporate and government spaces, due to their sophisticated encryption technology. These units aren’t just easy on the eyes, the technology and features under the hood are certainly aimed at the professional in mind. A thumbs up from us.