The Synclavier, produced by New England Digital in various incarnations from the ’70s through to the early ’90s, was a synthesiser with incredibly vast ambitions. Alongside the Aussie designed CMI Fairlight Sampler, it channeled developments in the earliest computers  into digital sound design. Initially starting with FM synthesis technology licensed from Yamaha , NED evolved the Synclavier into an additive synthesiser with an immense feature set, including 4 layers of synthesis called ‘Partials’ with FM, sampling capabilities that extended to resynthesising sampled sounds, a Chorus effect that would double up and detune the 4 Partials for as many as 16 Partials per key, and plenty more. Unfortunately, the price (predictably) was astronomical, with only the wealthiest studios and popstars able to access the inter-dimensional sounds of the Synclavier (cue Michael Jackson’s Beat It) Fortunately, the good folk at Arturia, well known for their software recreations, teamed up with the Synclavier’s original inventor, Cameron Jones, to recreate the Synclavier and bring it to the masses as Synclavier V in 2016 as part of the V Collection of software synths. Although received well, some bemoaned the lack of the Synclavier’s famous sampling and resynthesis functionality.  But, with V 2 in V Collection 6, Arturia have delivered. 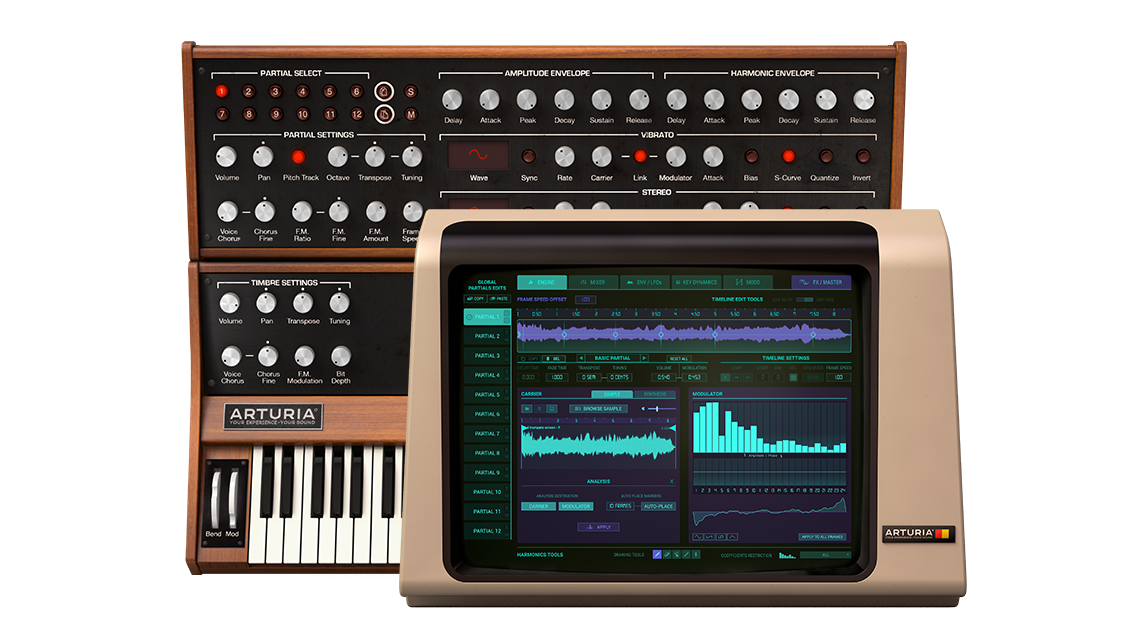 Synclavier V 2 is a deep synthesiser, and a difficult one to review without writing a thesis (but i’ll do my best). It’s unlike any other synth I’ve used, so I really had to go back to the drawing board and watch the in depth tutorial available via Arturia’s YouTube here. If you’ve bought this plugin and you’re reading this, I highly advise you to watch all of that 30min video.

Gone is your standard oscillator>filter>envelopes synth layout, welcome to the world of Partials, which you can think of as layers of sound generation. Arturia deemed the original’s 4 x Partials as insufficient, and boosted it to 12. Each Partial is essentially its own synthesiser, consisting of the synth engine (we’ll come back to that), amp envelope, harmonic (FM amount) envelope, 2 LFOs, key dynamics routing options and an extensive modulation matrix. Each Partial has a synth engine and…well, it’s pretty ridiculous. You have a Carrier and Modulator oscillator like you do on an FM synth and you can draw in your own wave shapes with the 24 harmonic sliders on the both the carrier and modulator. This is pretty similar to Ableton Live’s FM synth Operator at this point. However, above the harmonic sliders is a Timeline. On this Timeline, you can click in Frames. When selected, these frames will let you change your waveforms, it’s FM modulation depth, its volume and its tuning. Now hit a key, and it will evolve between your initial settings and the settings you just applied to that frame, creating a texture much like a wavetable synth. Now add a bunch more points with modified waveforms and settings, set the timeline to loop back and forward and enjoy your endless evolving synthesised texture. Another incredibly powerful feature of the timeline is the Fade Time parameter, adjusting fade time between each frame — it can vary between an instant change or a slow even one — meaning you can actually use the time line as a complex arpeggiator if you wish, especially since the Timeline can also be sync’d to your DAW.

The power of this engine makes unique ambient textures easily achievable, certainly suited to film/game composers and ambient musicians. But with some thought (or luck), you can make some absolutely monstrous basses and truly bizarre sounds. And, I’m just going to remind you here that the features I’ve outlined so far are just within a single Partial, and there’s 12 of these Partials.

In the Key Dynamics tab, you can, you can adjust the volume of each Partial depending on which note you’re hitting. You can also use Velocity in the same way — ie. soft notes use more of partial 1, hard hits use more of partial 2 . The Mod Matrix and FX/Master are more familiar territory,  behaving in much the same way other synths — hardware and software — do.  That said, the FX are very nice, and the modulation routings extensive. if we weren’t already spoilt with the fantastic synth engine, i’d write more about them. The mixer tab, aside from predictably giving control over the volume and panning of each Partial, also gives you a simple interface to control the Voice Chorus, FM Modulation, FM Ratio and whether you want that Partial to pitch track or be an atonal drone. Additionally it provides a master overide control for the Chorus, FM Mod, Pan, Tuning and Transpose — very handy for performance.

The main addition in Synclavier V 2, is the sampling and re-synthesis engine. Resynthesis is basically reverse engineering a sample of audio back to synthesiser parameters. So if you load up a sample of a bell, and tell the Synclavier to resynthesise that sample, it wil analyse the audio and attempt to recreate the evolving waveforms of that sample and place them on your Partial’s timeline. Imagine how mind boggling this was when released in 1984! (I actually stumbled on the original manual for the resynthesis add-on here).

The advantage of resythesis compared to a standard Sampler was the lack of undesirable audio artifacts and that pitching up and down no longer resulted in the sample speeding up and slowing down. This is less of an issue these days, modern computers and software make light work of time-stretching audio, and warp algorithms have gotten pretty incredible. The Synclavier V 2’s resynthesis can’t really compete with that — 24 harmonics is just not a high-enough resolution to accurately model a complex sample.

To me though, recreating an audio sample accurately isn’t the appeal. Whether or not it reproduces the audio accurately, it certainly generates some interesting results. I’ve been having a ball using the resynthesis function as a starting point, and tinkering with it from there. Drawing in your own waveshapes via harmonics is a little unpredictable, so having the Synclavier make you some is a really fun feature.

You can also just use the sample engine as a retro-style sampler if you wish,  it has also the gritty lo-fi character of an ’80s sampler, and comes with a set of audio editing parameters, that you can modulate over time using the Timeline. It should be noted, that you can’t switch between the Sampler engine and Synthesis engine using the timeline within the one Partial. It’s one or the other.

OK, this is getting long, lets wrap this up

Synclavier V 2 is an incredible software synthesiser. Arturia have done an amazing job of simplifying the interface to make this monster synth more accessible, and their additional features are very welcome. The presets library is extensive, and demonstrates the vast possibilities of this synth to great effect. The only improvement I can really think of is adding FM Ratio and Chorus amount on each Partial’s Timeline to add to the sound-sculpting possibilities. Perhaps a filter wouldn’t go astray as well. But really, there’s enough functionality here to keep me entertained for a very long time. I would highly recommend this synthesiser plugin to people who like to dig into sound design and get a bit weird and nerdy. Especially if you’re a little bored of your standard subtractive synths, Synclavier V 2 will blow your mind.

Check out the official page here