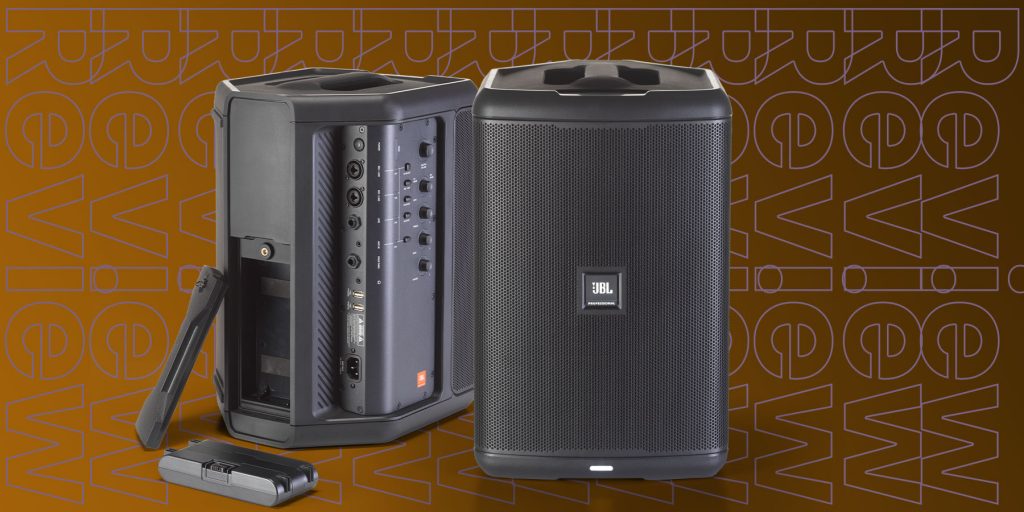 When the new JBL EON ONE Compact arrived at Noisegate HQ for review it only seemed like yesterday that we were busting out with the EON ONE PRO linear-array system, but how fast a year and a half can fly! So now, making the JBL EON ONE family a trio, with a younger, smaller sibling, we were curious to see if this young blood would serve up the goods.

Certainly not first to the punch in this type of PA design and form factor (think the Bose S1 Pro system) but certainly offering a wealth of features and power that many will find very appealing, this new compact powerhouse PA left us pretty impressed. Boasting a mammoth 112dB of sound pressure level from its 80-watts power rating is pretty hard to fathom when looking at this unit’s humble size and meagre weight of 8kg.

As for connectivity, the EON ONE Compact offers it in spades. Its integrated 4-channel digital mixer includes 2x XLR/1/4” combo inputs both of which offer phantom power for use with condenser mics or active DI’s, a dedicated 1/4” input for Hi-Z instruments and a 3.5mm Aux or Bluetooth connection for music playback. As for outputs, there’s a 1/4″ pass-through and a 3.5mm headphone out for those needing a silent practice option. Back panel control over volume, EQ and reverb are easily adjusted by the infinitely rotatable potentiometers, which indicate their position via the green LED’s that surround them, great for low lit environments. A built-in ducker is also included which will suit presenters and instructors alike, giving dynamic control between voice and music playback levels. Oh, and did we mention, there are two USB 3.0 ports too, keeping devices charged up and ready to go, rather nifty indeed. To cap things off is the 12 hours of battery-powered operation, needing just 2.5 hours to recharge when left dormant. 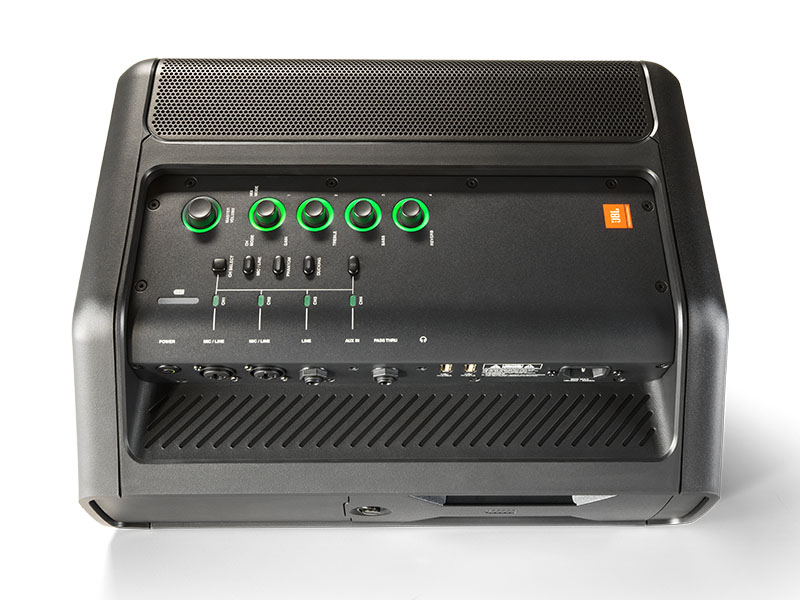 Bluetooth tech is available in the EON ONE Compact for both streaming and control purposes. A small but powerful feature worth noting is the EQ available on the Aux/Bluetooth channel, something that can be absent on other systems, giving users additional control over their music playback.

As for extra parameter controls, users only need but download the EON Control app. At the time of this review the app wasn’t yet available but we understand its compatible with iOS and Android devices and promises to unlock a wealth of additional features and control including 4-band EQ, Lexicon and DBX inspired effects such as reverb (already available via the back panel), delay and chorus and an 8-band output EQ. Presets are also available for getting set up quickly and easily. We’ll be keeping an eye out for the download and will bring you the juicier details on this soon.

Also to note is the sophisticated JBL SoundBridge Bluetooth networking, which allows up to 4 EON ONE Compacts to be synched and controlled from one single device. We didn’t have 4-units available to test this with but if the rest of the unit’s performance is anything to go by, we’re confident it will do just fine. You can also operate two units in stereo mode or expand your system the old school way via the 1/4″ pass-through output. 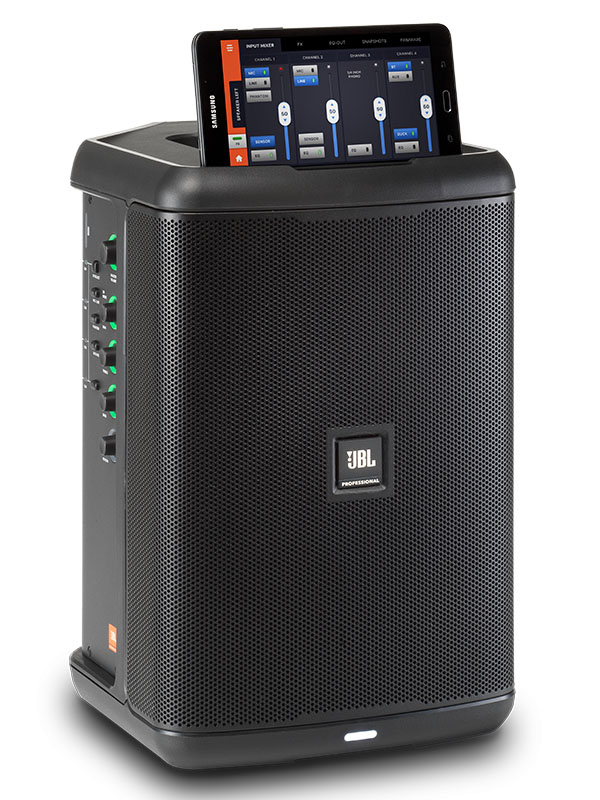 Listening to some familiar tunes first up with a simple pairing via Bluetooth presented a full, punchy and loud result. The fact that the low end extends right down to 37.5 Hz really helped with retaining the low end without becoming muddy or distorted at higher volumes. This impressive performance from its 8-inch woofer and will be favoured by the portable DJs out there.

Moving on to an electric guitar and vocal combo yielded equally impressive results. Although a little tweaking was required on the back panel to find a sound balance of EQ and reverb (something that we’d imagine to be alleviated with a preset on the Control app), once setup proved this little rig was well up for musician/busker duties. The ducker kicked in nicely too when speaking or singing loudly enough over the music playback giving unhindered voice intelligibility. Positioned either upright or as a wedge, the system automatically adjusts its EQ to suit and the JBL badge on the front grille can even be rotated to match, a nice detail. 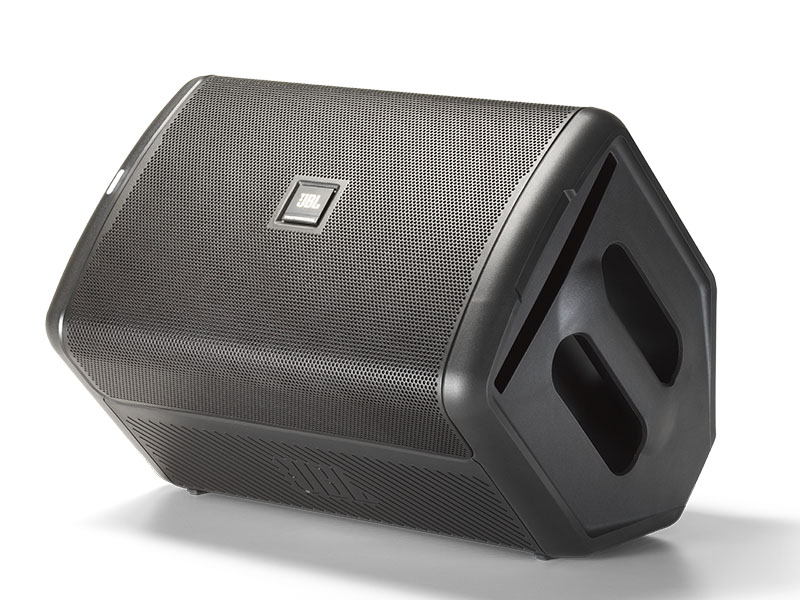 Whether a musician, DJ, presenter, instructor, busker, educator or someone who just likes a good sounding portable speaker system, there’s quite literally something for everyone with this little beast, it’s hard to knock it. The only question is – shall I make it a pair?

NAMM 2022: The DJM-S5 is a New Affordable Mixer From Pioneer DJ