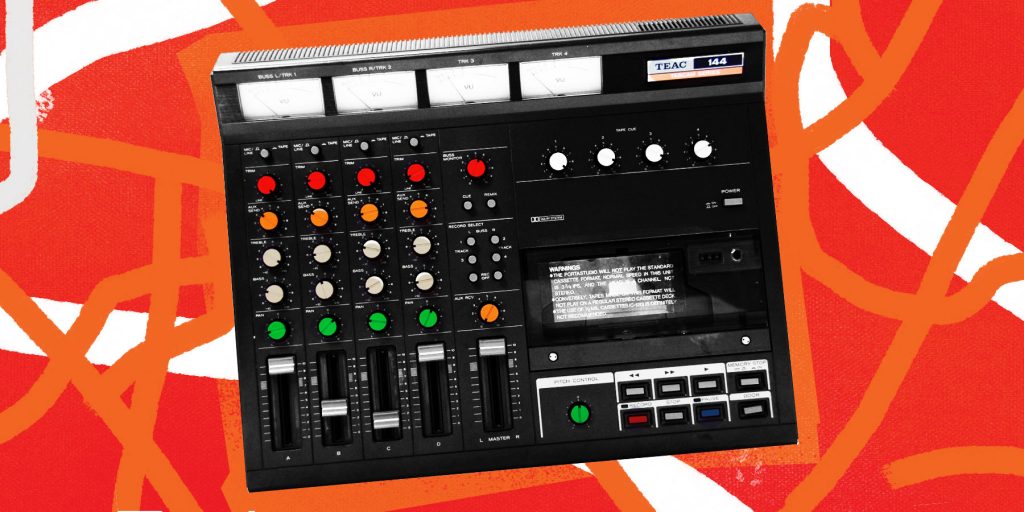 For a lot of us, our first experiences recording a song idea at home would have been to cassette. The world of the Digital Audio Workstation (DAW) was less the norm with the simplicity of hitting record on a cassette deck being the best kind of simple.

Fast forward to 2019, there’s no doubt that DAW’s are by in large, the most prevalent medium for recording music, however, the all-in-one multitrack recorder is still popular and a preferred choice for many. Before taking a look at what’s around today, we’re going to take a look into the history of these masterful recording devices and what’s made them so popular over the years.

It All Started with Portastudio

Winding right the way back to 1979, a revolutionary recording product dubbed Portastudio made its debut to the world. The TEAC (Tascam) 144 Portastudio was the world’s first self-contained 4-track recorder which recorded straight to cassette. This unit essentially triggered the home recording revolution, allowing musicians to affordably multitrack record at home, blend 4 tracks together and mix them down to a stereo track onto cassette deck. This affordable little recording unit certainly wasn’t just for the musician on a budget, Bruce Springsteen’s 1982 album Nebraska was recorded “on a Tascam Portastudio and a pair of SM57’s”. Taken from the interview published by Tascam in 2007, Springsteen’s long-time engineer Toby Scott tells the story… “he’d enlisted his guitar roadie, Mike Batlan, telling him ‘go find me a little tape machine – nothing too sophisticated, just something I can do overdubs on.’ So, Mike walks into a local music store and the clerk sells him a Teac (Tascam) 144, which had been out for a year or two. It was a simple, straight-ahead machine – perfect for what Bruce wanted to do.” After several months passing, these “demos” recorded by Bruce in his spare bedroom ended up being mastered and went on to become, what we now know as the critically acclaimed record Nebraska.

Expansion and a New Era

From the introduction of the TEAC (Tascam) 144 in 1979, the Portastudio family rapidly expanded with numerous adaptations, the next being the Portastudio 244, introduced in 1982. Introducing new features from its predecessor such a dbx noise reduction system, more flexible EQ and being able to record 4 tracks simultaneously, it seemed that this new and attainable recording technology was indeed revolutionizing how people could record music without the need for big label budgets. One modern, notable user of the 244 is indie icon Mac Demarco. A lot of his early recordings and debut LP Rock and Roll Nightclub were tracked on a Tascam Portastudio 244. Having a listen to this album you’ll notice the use of the varispeed knob, creating the warping effect, which has become somewhat of a sonic signature of Mac’s.

As time progressed so inevitably did Portastudio. Models like the 414 MKII and 424 steered away from VU meters and introduced more modern LED metering for each channel plus adding line-level inputs making a total of eight inputs available for more creativity and flexibility. These models had successors, which introduced other new features and expansive I/O options, such as XLR inputs and more. Things really peeked with the Portastudio 488, which managed to squeeze in 8 individual tracks able to be recorded to cassette.

Flash forward to the ’90s and the technology boom presented new technologies. Remember minidiscs? The Portastudio 564 utilized this (at the time) exciting new technology, bringing Portastudio into the digital world. Then came hard disk, CD and SD card storage.

Although Tascam certainly led the charge with Portastudio, there were numerous other manufacturers who jumped on board to ride the home recording wave.

Fostex released several 4-track cassette recorders, being the X15, X18 and X26. One of Fostex’s digital iterations, the DMT-8VL allowed users to record 8 tracks to hard disk, at 16bit and 44.1kHz CD quality and offered users more tracks on mix down and include other useful features like a built-in metronome, MIDI and more.

Korg introduced the monstrous D16XD and D32XD digital multitrackers, which really took things to another level. The D32XD included a touch screen, moving fader automation, 40GB of built-in hard drive space and a CD burner. These workstations were serious.

Roland and Boss had some sophisticated offerings also. Roland’s VS series introduced in the mid-’90s boasted very sophisticated DSP and full production capabilities, with the series evolving to its flagship VS-2480 model in the 2000s.

The Boss BR family of multitrack recorders were a popular choice. Although not as intensive as the Roland VS units, the great thing about these “digital recording studios” like the BR-900CD and BR-1600CD was that they gave users an easy to use machine at a more affordable price point. They certainly packed a punch, with a built-in drum machine to get ideas down quickly without needing to record live drums, plus giving users access to the world of COSM (Composite Object Sound Modelling), Roland’s sophisticated digital modelling technology, introduced in the company’s early VG guitar systems of the mid 90’s.

With a history spanning 40 years, it begs the question, what are the all-in-one recorders of today? Well, as you probably guessed, no new cassette recorders are being manufactured, but with the cassette format having a resurgence, who knows what the future may hold.

You may well be surprised to know that these current units in production are rather popular, with many creators preferring to keep things simple, recording their ideas into a single piece of gear. Equally, it’s not uncommon to see users smash out ideas on a Portastudio or something similar, then flesh them out in their DAW.

The amount of processing that can fit into pocket-sized units is astounding. Tascam’s current DP-006 and DP-008EX Pocketstudio’s offer SD card recording, battery-powered operation, simple control and portability. The same goes for the Boss Micro BR and BR-800 recorders, for getting ideas recorded quickly when on the move.

For those who need something larger scale, there’s the Portastudio DP-24SD and DP-32SD available. with all the high-quality DSP and Mastering effect processing you’d come to expect from Tascam. And for those wanting a more “old school” analogue feel, the newest Tascam family member Model 24 allows users to record a whopping 24 tracks simultaneously, either onto SD card or direct to DAW via USB connectivity, with punch-in/out capabilities and more available.

It’s clear we’re in the age in which computer recording is king, but for those wanting to steer clear of the mouse and keyboard, an all-in-one recording system might just be worth a look.