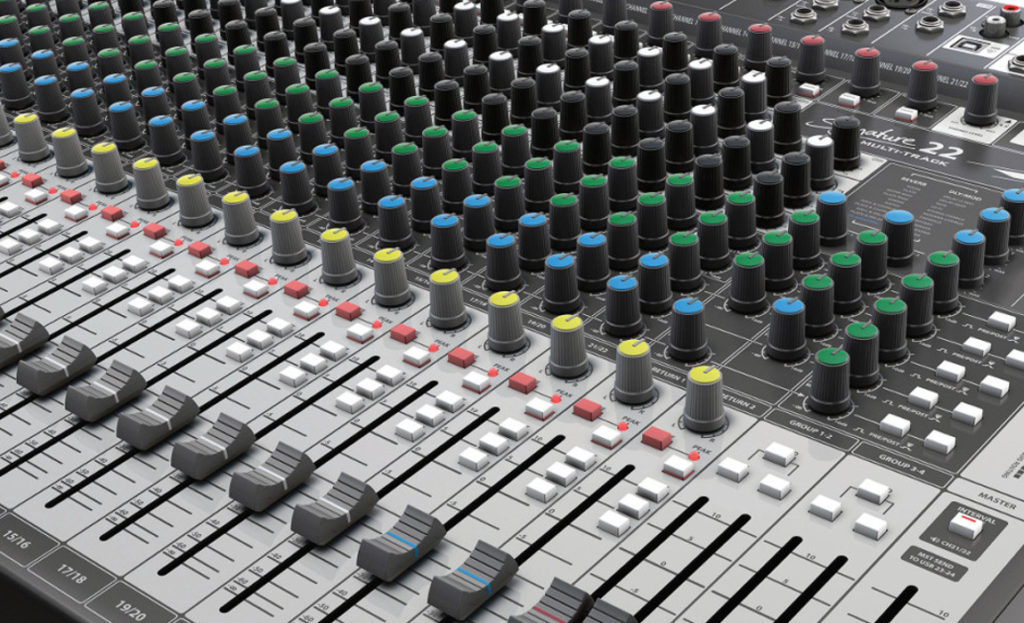 Soundcraft have created an analogue mixer that pays homage to their past, but with a USB–flavoured twist.  There has never been a time when there has been a shortage of small–format analogue mixers aimed at the live–sound market and  as digital consoles become more affordable and user–friendly, it takes something a little different in the analogue catalogue to catch the eye and excite potential users. The 22 MTK from it’s Signature range uses respected technology from the company’s established and successful product lines but includes a built–in, bi–directional multitrack USB recording and playback interface. This is heaven for all analogue mixer buffs who want the tactile function and warmth of an analogue desk when live mixing but with the technology to multitrack when needed. 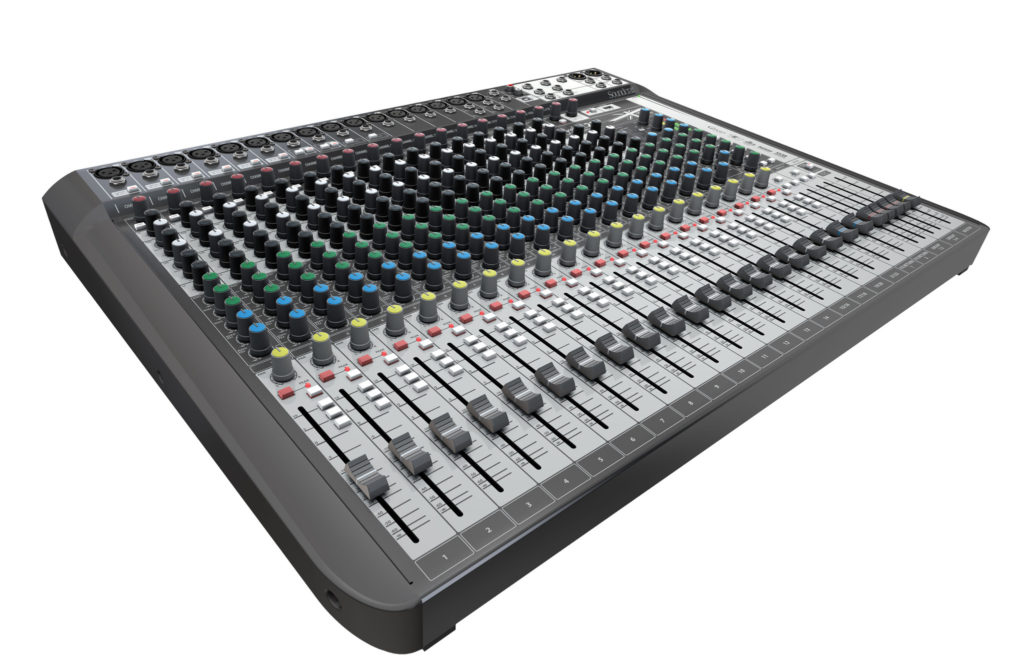 The Signature model line–up currently comprises six variants: the Signature 10, 12, 16 and 22, plus the 12 and 22 MTK versions with integrated multitrack USB interfaces. Within this review we look at the 22 MTK, which is an in–line 22:4:2 console with 16 mic preamps. The first 14 channels are mono with XLR and TRS inputs and can handle mic or line levels; 15–16 and 17–18 can be used as mono mic/line channels but alternatively offer stereo TRS inputs, while the last two strips are stereo only. Channels 19-20 have standard TRS inputs, while 21–22 offer phono and USB ins, which are summed if a USB input is present.

The console itself has a nice low profile and the basic mix functions are exactly as you’d expect to find them, and the channel, bus and effects layouts are logical and neat. The mixer is housed in a slim but very rigid steel housing which appears to be very nicely put together, and there is only minimal flexing of the case when you lift one corner, meaning that the internal boards should be well protected. The faders have a moderate amount of resistance, which makes fine control easy; pushing hard on the leading edge of the fader knobs doesn’t result in sticking or jamming.

The front end of the Signature series uses low–noise ProMic preamps from the well–respected Soundcraft Ghost console, providing ample headroom and allowing the inputs to be operated with high trim settings if needed. Four of the mono channels (7–10) have high–impedance switches for the jack inputs; with these switches active, the inputs present an optimum input impedance so that instruments with pickups can be connected directly without detrimental loading effects. The input gain range is –5dB to +58dB, and there’s a peak warning LED to help avoid clipping.

The first eight channels have a built–in dbx limiter, which is engaged with a single button. The limiter parameters are factory-set and apply a pretty high ratio of around 7:1. A red LED inside the button lights up to indicate limiter operation, getting brighter as the limiter works harder. The limiter threshold is set below the clip point of the input channel, so there’s a certain amount of headroom to cover things like EQ boost in the following stages, an excellent feature, and one which  will avoid problems in all sorts of live situations. It’s not an excuse to work with inappropriate input level settings, but it will get an inexperienced operator through a potentially tricky situation while the necessary adjustments are made, or even provide a deliberate high–ratio compression feature if one is needed.

Each input section has a switchable 100Hz high–pass filter and a USB return selector, which routes the corresponding incoming USB channel into the strip instead of the live input — more about the USB interface later…

Their ‘British EQ’ and the design used in the Signature is based on that of the Soundcraft Sapphyre consoles, with fixed high and low shelving bands, two frequency–adjustable mid–range bands on the first 18 channels, and a single swept mid on channels 19–22. The Sapphyre EQ uses asymmetrical bell curves to control the mid range; when boosting around the selected centre frequency the curve is relatively wide, but when applying cut it is a sharper (higher–Q) curve, giving more precise attenuation of unwanted frequencies and avoiding too much collateral damage, if you will. This approach to EQ make a lot of sense in a live context, especially when there are two mid–band controls for greater control, and it doesn’t impact on the engineer’s ability to find problem frequencies by artificially boosting and sweeping the mid range then applying just enough reduction at the right place — if anything it makes you take that extra little bit of care to place the frequency controls in just the right place. Flexible control is catered for by a nominal 1.6kHz overlap between the lower and higher mid–band sections, which could come in very handy if two close problem frequencies need to be addressed.

Lex Get to the Effects

The 22 MTK boasts two independent Lexicon digital effects processors, which are pre–programmed with a set of standard presets but can be adjusted as required. There are two internally routed aux buses that feed the input signals to the effects section, and they have two dedicated return channels which offer full routing to the output buses (and to each other, for cascading effects). This arrangement makes it very easy to feed wet signals to monitor mixes — something not always as simple on some digital mixers!

The quality of the Lexicon effects goes without saying as there has to be something in here which will work well in any live situation where this mixer would be used.

The MTK versions of the Soundraft Signature mixers have a full bi–directional multitrack USB interface. On the 22 MTK, this outputs all 22 input channels individually for capture or live processing within a connected computer, and accepts 22 incoming tracks at the same time. A further bonus is that, additionally, the stereo master mix is also sent out on tracks 23 and 24, so you can record the whole, analogue–summed live mix — including any processing applied — as well as the individual ‘clean’ sources. The individual channel signals are sent post-gain, pre-EQ, and are returned to the same point in the signal path. As such, the USB facility can be used exactly like a complete set of insert points, with external processing applied via whatever plug–ins are available in your DAW application.

For live work, one of the most useful tools available with full digital mixers is the ability to carry out a ‘virtual soundcheck’, where the band can be recorded live during a real soundcheck, after which the engineer has the luxury of playing the captured multitrack over again and making fine adjustments long after the performers have left to satisfy their special dietary requirements. Alternatively, a pre–recorded multitrack can be used to get everything checked out before the musicians even arrive. This highly desirable feature is possible on the analogue 22 MTK thanks to the USB interface, and can be used in exactly the same way. The USB 2.0 interface is stated as compatible with Windows 7, 8 and 10 and Mac OS.

The Signature 22 MTK has an abundance of goodies built right in — Ghost preamps, Lexicon effects, asymmetric EQ and so on — in a highly flexible and nicely laid-out design. Add to this the multitrack USB interface, and this console will surely become a favourite for live shows and studios alike.

While the kind of functionality on offer here is readily found in the current crop of digital desks, multitrack USB recording and playback is built into only a handful of analogue consoles — including the Midas Venice U and F series, and the Allen & Heath GS–R24, although these are all much more expensive than the Soundcraft.