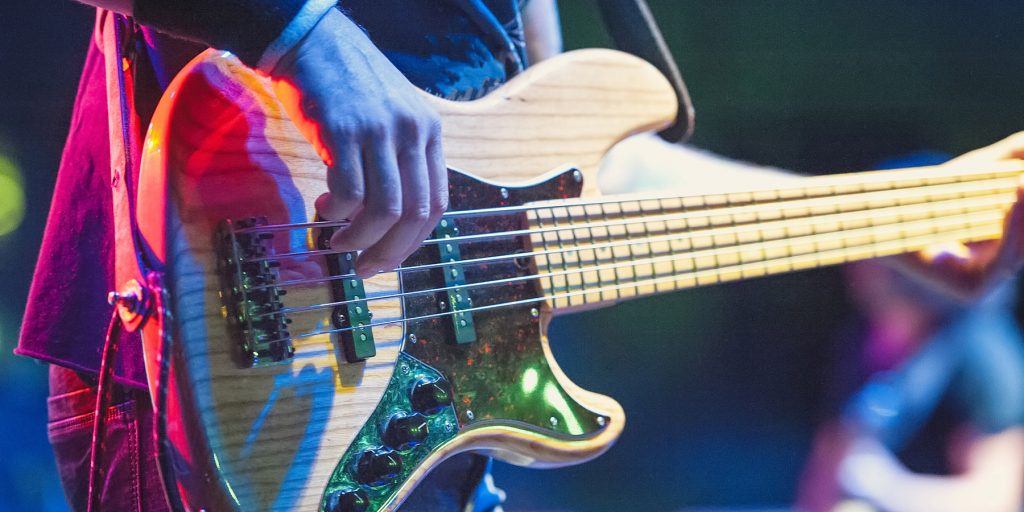 There are many conflicting views on whether bass players need effect pedals, but judging by the variety of options on the market today, they seem to be rather popular and one could argue they have become the standard.

Many purists will tell you that the key is to focus on the “tone,” which is determined by the kind of bass you play, as well as its timbre, pickups, amplifier, and playing style. That was all well and good for bass players in the 1960s and 1970s like James Jamerson, who played bass on most Motown Records recordings from that era, or Jaco Pastorius, who could make the bass sing to any tune, but with a rapid change in music, styles have come to a plethora of essential bass sounds that weren’t even imagined thirty to forty years ago. The bass line is the glue that holds modern genres like Hip Hop, Funk, Rock, R&B, Heavy Metal, and others together. Bass effect pedals like the Wah, Compressor, Overdrive, Octave, and Fuzz, to name a few, produce the various sounds that are characteristic of these genres.

Why Should Guitarists Have All the Fun?

When you think of the many influential bass players from the modern era who have inspired our senses with amazing bass sounds, one thing that comes to mind is that they have all had an impact on how today’s bass players approach their arsenal of sounds. Effect pedals are a common tool used by musicians to create “their” sound, including Flea, Doug Wimbish, Chris Wolstenholme, and Robert Trujillo, to name a few.

There are many different effect pedals for bass guitars, so let’s go into more detail about some of the common types of pedals to help you spice up your bass tone.

Your preferred tone as a bass player will likely be a clean sound, and this is where a preamp will prove useful. A preamp is hardly noticeable in comparison to the other types of pedals because its primary function is to mould your basic bass tone. The simplest and most affordable way to give your passive bass more control and tonal versatility is to use a preamp pedal.  There are lots of options available, although check out the Aguilar Tone Hammer or the MXR M80 DI Plus as two very reasonable pedals that also have built-in DI’s and are flexible for studio or stage set-ups.

The range of a sound signal is altered by a compressor pedal, such as the Aguilar DB 599 or the MXR M282 Dyna Comp, by keeping the peaks under control and raising the softer parts of the audio signal, overall producing a smoother sound. When used sparingly, this type of pedal can produce a percussive tone, that has made it popular for slap-style playing. 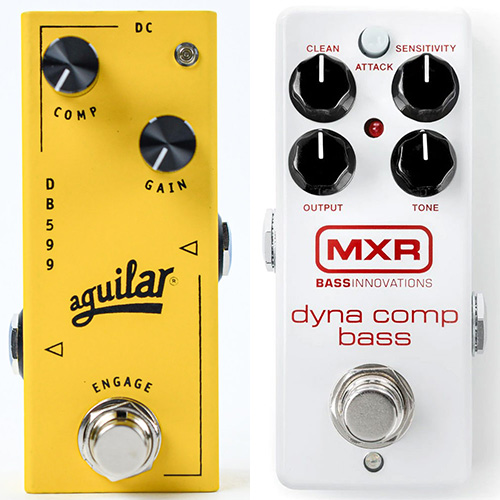 The three primary categories of distortion pedals are overdrive, distortion and fuzz.

Distortion pedals like the Source Audio Aftershock produce an even level of distortion with a range of colouration. It alters the sound by clipping the signal adding sustain and harmonic and inharmonic overtones and leading to a sound that is often described as “warm” and “dirty”. A warmer type of distortion is produced by overdrive pedals like the Aguilar Agro, which essentially adds grit to your signal, giving you a sound similar to a cranked amplifier at the edge of breakup and mimics the sound of a valve amp. Compared to distortion pedals, fuzz pedals like the Electro-Harmonix Nano Bass Big Muff will clip your sound using square-wave clipping and massively compress the sound waves more, producing a heavy saturation sound with low end and sustain. 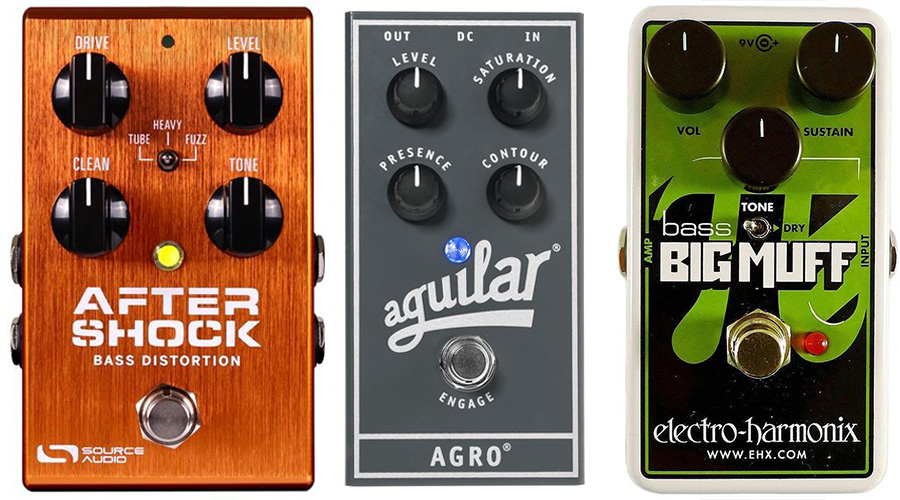 Flanger and chorus effects use short delay times and modulation providing a thicker sound that can also feel like the audio is moving. Primarily, these pedals mix two identical signals together, one signal delayed by a small and gradually changing period, usually smaller than 20 milliseconds. The slightly longer delay times used for the chorus effect do not result in the same comb filtering results as found in flagging. Pedals like the Boss BF-3 Flanger have been a fixture on many pedalboards for many years or the TC Electronics Corona Chorus are just two of the examples available on the market. 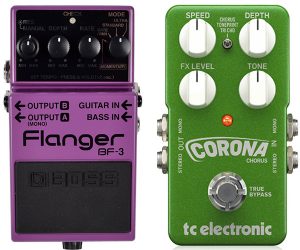 Equalizers and filters both work to increase and decrease specific frequencies, although filters can have a more dramatic effect. Wah-wah pedals, like the Jim Dunlop Crybaby Mini Bass Wah Pedal, are a type of resonant filter with a variable pedal where you can perform the amount of effect with your foot, whereas an envelope filter, like the Aguilar Twin Filter, responds to the dynamics of incoming audio – harder playing by will open the filter wider. 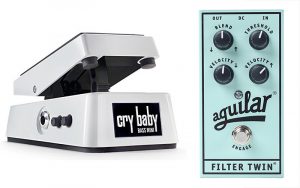 Phasers are based on delays, just like chorus pedals are. They modulate the sound signal with peaks and troughs to create a spinning effect, making them slightly less smooth than chorus pedals. Check out our  “7 Pedals in 7 Days” video above with the Aguilar Grape Phaser pedal.

You guessed it, delays produce the classic echo and slapback type effects. These effects tend to be deliberate and stand out. Unless you want some crazy delay effect or you’re looking to experiment with your sound, they tend to be less frequent on a bass pedal board. The processed/delayed signal can be played back once or multiple times and the amount of delay that can be applied will vary between delay pedals. A couple of pedals to try out as the TC Electronics Flashback and the very tasty Universal Audio Starlight Echo Station. 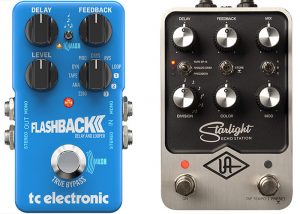 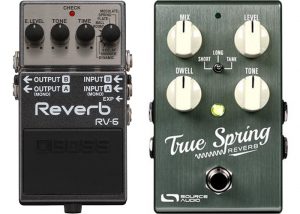 The Digitech Whammy Bass Pedal, for example, changes the bass’s pitch up or down and everything in between plus more. They produce wonderful effects by adding harmonies and chorus. A down and out octave effect pedal, such as the MXR Deluxe Octave Deluxe, does its thing by mixing the input signal with an octave or lower than the original for that fat synth type of sound.

This is where some of the real fun lies and it’s with bass synthesiser pedals. The stand-out for us is the Source Audio C4. This is an incredibly adaptable synthesiser, octave, and filter pedal that makes it possible to create a tonne of amazing sounds on bass with full editing capabilities thru the Source Audio Neuro App.

Another Synth pedal to consider is the Boss SY-1 which will transform your bass into a versatile synthesizer and is a lot of fun to play with.

The Source Audio Ultrawave sits on its own “Weird and Wonderful” category but is worth looking into as it creates sounds like no other. The Multi-Band Processor Ultrawave splits the incoming audio into 10 bands, each one of those bands is then processed individually with overdrive, tremolo, octave up and more. This is a great way to get a unique sound and well worth the exploration.

There you have it, this is just the very tip of what is available out there but there is one thing to keep in mind — not all of the pedals have to be used individually. Why not combine an overdrive and chorus pedal for a warbled drive sound or a fuzz, octave, and envelope filter pedals for a distinctive synth sound.

There’s also no reason why you shouldn’t experiment with guitar specific pedals, although be aware you might lose some of your bottom-end tone because these pedals are made more for the mid-range frequencies that a guitar produces.

The options are endless, so use your creativity to find the sound you envision with your next new bass effect pedal!