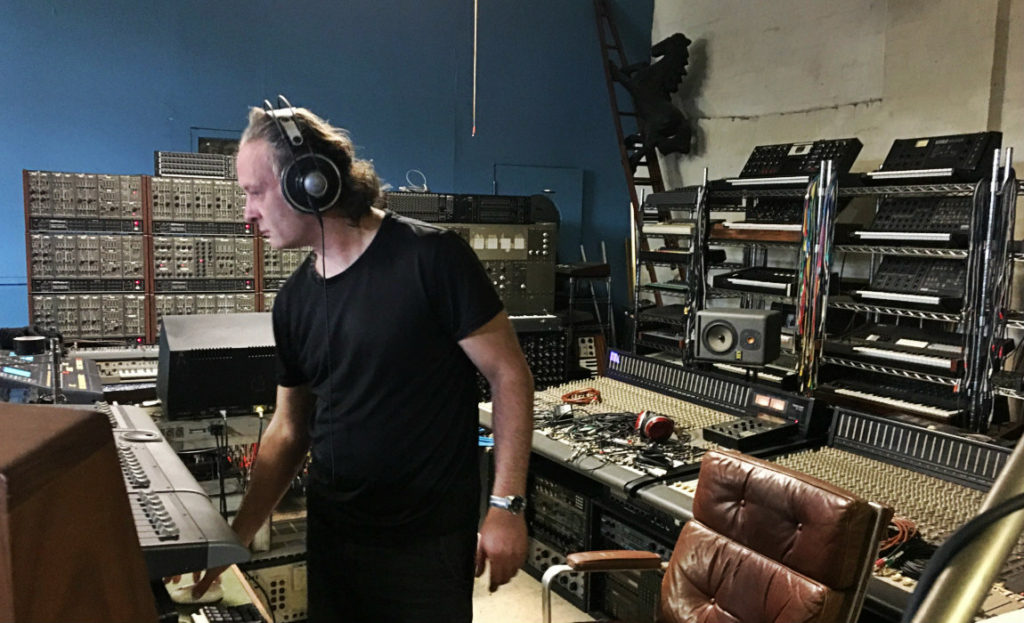 Steve Williams is addicted to synthesisers and his vast synth collection verifies that. Amongst his collection are rare vintage synths such as the British EMS VCS-3 (as used by Pink Floyd on “Dark Side of The Moon”) and the Australian Fairlight Series IIx and CMI Series III to one of the more recent synths, the KORG Karma.

We would have loved to have spent a week in Steve’s studio tinkering with his vast collection, but we were still fortunate enough to take some pics and then sit down and chat about how he started to accumulate his collection, and about other revelations throughout his career.

Tell us a little bit yourself, how did you get started playing synths & Keys?

I had a few piano lessons when I was about 7 years old when I got paired up with the wrong music teacher and eventually the lessons didn’t continue, but it was enough to get me interested in music making.

We had a Pianola at home and I used to put on the Pianola rolls and pedal away and follow the drop of the keys, and that really was the best music education I had. After about 6 years on piano being self-taught I migrated to a terrible, cheesy Italian organ and from there I think I was about 15 years old when I got my first synth, the Roland SH -1000. It was monophonic with very limited synth features but it was enough to spark my interest and soon after I purchased a couple of Boss guitar pedals to run it through which fattened up the sound significantly.

A year later in 1981 I bought a Korg MS-20. This was my first “real synth” as it was not dependent on presets or trying to sound like traditional instruments. It was a synth that sounded like a synth and offered enormous sound shaping potential.  It was semi-modular so I could use patch leads to experiment with different ways of routing signals to various modules within it. This taught me a lot about how synthesis works and laid the foundations for many years to come.

Who was your biggest musical influence growing up?

I’d probably have to say Kraftwerk I saw them play in Melbourne in about 1980/81 which was the first time they came to Australia. The sheer precision of their music, the intensity and the fact that it was so different to everything else that was occurring in the music market at that particular time, I just found incredibly engaging. They were so original and musical and really pioneered electronic music. Everyone making electronic music today owes them a great deal. They were and are still are the “godfathers of electronic music”

What are some of the bands have you been in?

In the mid 1980’s I went on tour with a band called Pseudo Echo. In 1985 I spent a year as a touring keyboardist with them where we played about 200 shows around Australia and after about 1 year on the road, I migrated to another Aussie synth band called Real Life, who had some success with a song called ‘Send me an Angel’. Their original keyboard player decided to leave the band after a couple of albums and I was offered the position as keyboard player and song writer with that band. I ended up recording and touring internationally with Real Life for 5 years.

We see you have a vast range of synths, can you tell us a little about how you started the collection?

I never really intended to be a collector. For me it was just about having good access to the tools of electronic music making and I suppose when I first started buying synths they were so expensive that when it was time to upgrade, I would always be trading something in to help finance the next purchase. At one stage about 25 years ago I started to miss all of those steps that I’d sacrifice along the way so I started to replace synths that I’d traded in or swapped out over the years. And I perhaps became a bit obsessive over the long term and all of the sudden I ended up with 90 odd keyboards in the collection. I just love synths…..and drum machines and sequencers and effects units.

What is the best musical purchase you have ever made?

Ooh, tough question. The best would probably be Modular gear, I’m really into the modular side of things. I started with Modular about 20 years ago and it’s just something that I’ve continued to find fascinating by virtue of it just being so incredibly flexible.

]I’ve got mostly vintage modular systems so there are 7 different modular in the collection but the physically biggest and the most impressive of the lot is a Roland System 100M comprising of 9 cabinets, 20 oscillators, 20 filters. It’s an absolute beast of a synthesizer. Made in Japan in 1979 and still sounding amazing 40 years later. It took a long time to accumulate all 9 cabinets and configure it as it is now, but it was worth it.

What is the go-to gear that you use in production and why?

Because I’ve got such a diverse palette of sounds to work with, I tend to swap it out. I find that if I try to look at the entire collection and go ‘what do I make music with’, it’s very hard to stay focused, so part of my creative process now, is to pick one synth, isolate it from the rest of the collection and just see what I can do with that. So often that will involve multi tracking it, 5, 6 or 7 times into the software. I just find that by picking something old, putting it through some pedals, delays and reverbs and these sorts of things, for me the challenge is about breathing new life into old instruments.

What are some of the synths you are hoping to add to your collection?

Well I don’t see it happening anytime soon, but I’d really like a Synclavier. They are a digital synth, similar to the Australian made Fairlight incredibly rare and super expensive. I don’t think I’ll possibly come across one in this lifetime but perhaps the next.

Have you been playing gigs of late?

I’m still gigging occasionally, not as often as I used to, but I do quite a few experimental gigs under the name Deerman. They primarily involve me taking out vintage analogue gear and doing entirely improvised gigs so every time I play, it’s an entirely different experience. This keeps me on my toes and I enjoy the adrenalin of having to make new things happen in real time, in front of an audience. It is fabulous pressure to work under and every show is unique. Very different to playing the same 16 songs every night on tour as I used to do.

What else are you doing nowadays?

I work as a keyboard/synth specialist at Manny’s in North Fitzroy. I’ve been with Mannys for 17 years and I’ve worked in Music Retail over the past 27 years. As I have been so immersed in the live and recording scene for so many years, I spend my retail days helping other musicians connect with good gear and to get their creative juices flowing. It comes very naturally for me and my experience is very useful in helping others follow their dreams.

If you could jam with anyone, who would it be?

I’d have to say Depeche Mode. They’ve been a very consistent influence on me in terms of their song writing and the sounds they use. They’re just one band who over many, many albums, have held my fascination. Martin Gore writes such personal lyrics and they combine very musical and melodic structures with beautiful soundscapes. Great songs delivered with great style.

Do you have any advice for future budding producers wanting to get into the industry?

I think the great thing about music technology at this point, is that it’s very affordable for young musicians to get set up, whether its software based, or a combination or software and hardware. The music making tools at your disposal at this point in time are very affordable and very functional. When I first started making records, it was very expensive and the sheer expense of it made it very prohibitive. Home musicians are doing amazing things in their home studios now so it’s just a case of understanding those opportunities, working hard and writing good tunes.  It’s also just about “doing the work” Every time you record or play live you learn something new so that accumulates over time and like all things “the more you practice the better you get. Great music must be original and have integrity and be an honest reflection of the artist that makes the music. Don’t make someone else’s music. Find your own sound and your own space and be brave.

If you had a big Audio crystal ball, what’s your predictions for the synths of the future?

I think everything old is new again, we’ve seen a huge resurgence of analogue designs come from many of the major players’ particularly Japanese and American manufacturers. I think the warmth of analogue sounds combined with the reliability of some digital elements, is where synths are going. Technology has re-embraced the sheer beauty of analogue sounds and manufactures like Korg are not only continuing to re build some of their own classics, but they have also done a lovely job of re-creating an American classic the ARP Odyssey.

What’s next for Steve Williams?

Hopefully just making lots and lots more music. My work philosophy has always been, I create quality through quantity in that I just try to keep working all of the time and then let time decide which tracks to keep and which tracks to ditch. But for me it’s a case of staying busy to keep that momentum going. I just love making music. And every year I get a little more skilled and the studio gets a little more crowded. It has been a fantastic journey for me over the past 40 years and I can’t even imagine doing anything else. I feel very fortunate to have discovered synths at such a young age and to have shared so many amazing times both on stage and in the studio.

It has been one hell of a ride and I have enjoyed both the highs and the lows of the music industry.