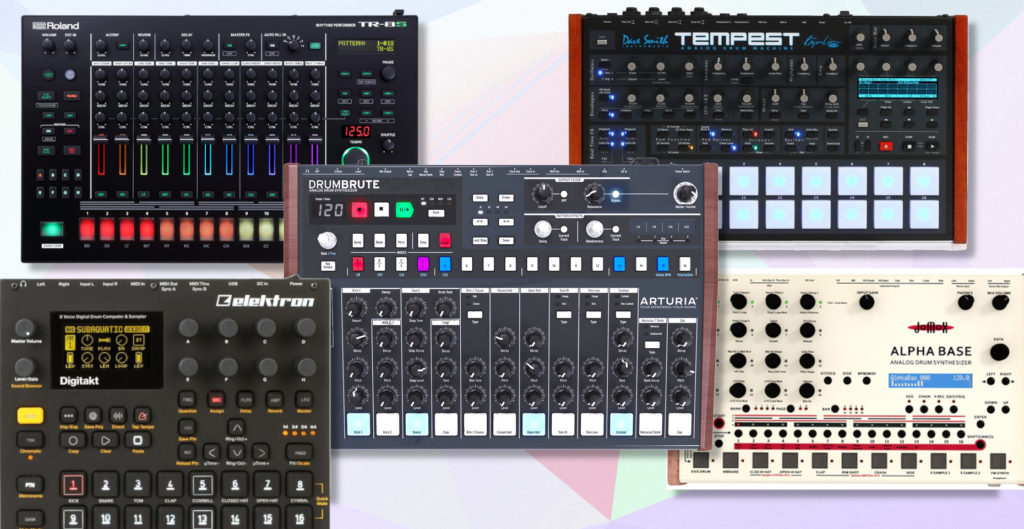 Drum machines are an integral part of a music producers arsenal as they have been ever since the 60’s when KEIKO the original company name of Korg released the Doncamatic DA-20 drum machine.  So we take a look at 5 drum machines that are still currently in production and that have made an impact over recent years. This list of machines now features amongst the vocabulary when it comes to striking up a beat whether in the studio or live on stage.

The Arturia DrumBrute analogue drum machine with it’s seventeen unique analogue sound generators, twelve voices of polyphony, individual outputs and a layout which is perfect for that hands-on control. Its “one-knob per function” approach and accessible sequencer definitely favour live performances and quick improvisations. Arturia released a spin-off of this machine with the DrumBrute Impact featuring a different sonic palette but in a smaller format with fewer voices but big on sound. If you really want the hands-on approach to beat making and improvisation, then this is the machine for you.

When Dave Smith and Roger Linn joined forces to create the Tempest all those years ago, no one expected anything short but a brilliantly-made, fine sounding instrument. This 6-voice drum machine boasts an architecture with two analogue oscillators plus two digital oscillators with per-voice sample-loading capabilities, including over 400 drum sounds, two LFOs per voice, classic Curtis filters, six individual outputs, a flexible routing matrix, two mod strips, real-time recording with parameter changes, onboard effects and a clever layout that can be configured as sequencer. Still making great beats today…

The Elektron Digitakt  8-voice drum machine & sampler favours drumbeat production and it has enjoyed a great deal of success since its initial introduction back in 2017. The Digitakt is quite a crafty machine that not only offers serious sequencing capabilities taken from the bigger Elektron machines) but it can also easily integrate into larger setups thanks to its eight MIDI tracks, with channel and CC routing. It also comes with onboard effects and can sample up to 30 seconds of audio. Overall, this little beauty presents itself as a great entry point into the Elektron universe and drum sampling.

The Roland TR-8S brings together sounds from all the classic TR-series drum machines in a neat modern package. The TR-8S combines Roland’s circuit emulation and adds sample loading, onboard effects, per-step automation, multiple outputs, automation recording and total DAW integration. This unit also presents a strong focus on live performance, with a high number of features to enable adjustments and variations on the fly. Check out the video below…

The Jomox Alpha Base has an immense array of features, by combining different sound sources such as analogue synthesis, 16-bit/48kHz samples and the Jomox’s proprietary MBrane drum synthesiser for a total of 11 distinct instruments. It also features varied modulation options, including one LFO per instrument and parameter locks per-step, eight individual outputs, delay and reverb effects and a small 6-voice FM synthesizer – and an SD card slot for expanding the sample library. A great device for those crunchy drum sounds with a blend of synthesis.

There you have it, 5 drum machines that have definitely made an impact on the way music is produced today, that are still in production and wouldn’t look out of place in your studio or live stage setup.

We would love to hear your comments.