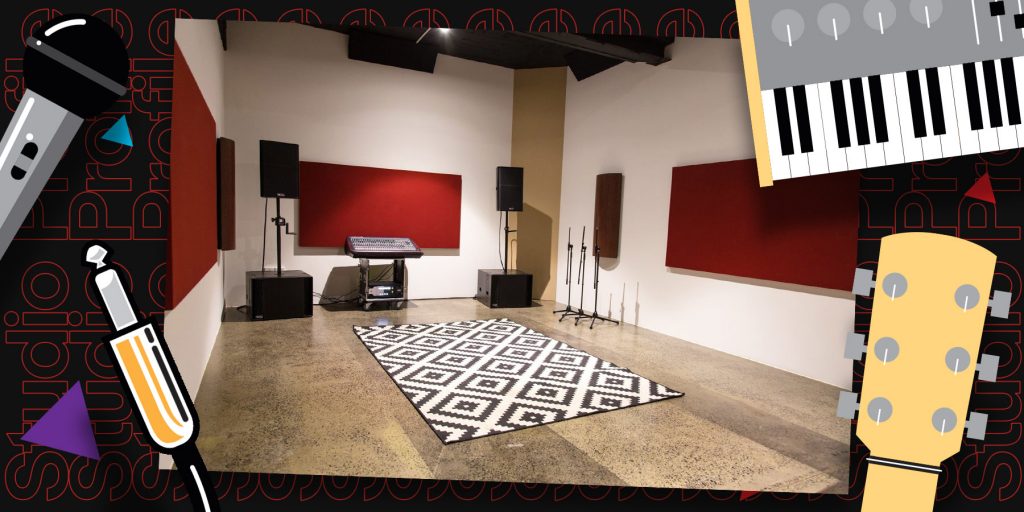 Nestled in Brunswick’s industrial fortress lies a one of a kind musical hub. A place where creatives from the furthest reaches of Australia flock, looking to fine-tune their craft, oil their musical gears, track and mix their next record or just hang out in a space with other creatives and enjoy a freshly crafted coffee or a cold beer. We are of course speaking of the one and only Wick Studios.

Boasting some of the best sounding rehearsal rooms one can find, a ginormous production and tracking room ideal for larger acts requiring full production rehearsals, a fully-fledged recording studio and a lush open plan space to relax and enjoy the creative vibes. With professional acts like Killing Heidi, Gang of Youths, Ella Hooper, Press Club and Loose Tooth but a few of the acts that often pass through these doors, you knpw Wick Studios is a musical facility of the highest esteem.

Noisegate recently had the privilege of getting the grand tour of the facilities, talking gear, and catching up with one of the many legends of Wick Studios, Cameron Hull.

What are the origins of Wick Studios?

Wick Studios has been operating under its name for about ten years or so and I’ve been here for just under four years now. Before it was Wick Studios the space was called The Dane Centre of Entertainment, which goes back another twenty plus years before we took over, so it’s been a rehearsal space for a long, long time. In about 2014 there was a roof collapse in a storm and there was some water damage, so the owners decided to tear the whole place down and start again. The whole place was rebuilt and was designed by Andrew Steele from Ultrafonic, who is based up in Brisbane, with the help of Dan (one of the owners). They’ve designed each room to sound as great as possible.

How do you go about engaging with the local music community? Do you host events at the studios?

Yeah, we do host a few different events that help engage with our local community. The main one would have to be “Girls Rock”, which is a camp for youths who are female or non-binary. They are able to get together from all ranges of musical ability, from none to some, form bands and do workshops learning how to make their own merch, street press and everything that’s involved in being in a band. There are normally about forty to fifty kids that come through once or twice a year, for a week, which is always chaos, but in the best way possible, so we love working with Girls Rock. I’m sure it’s just going to get bigger and bigger as they’ve spread into every capital city in the country, so it’s great seeing them grow.

That’s amazing Wick Studios are able to be part of something so special. The rooms at Wick Studios sound amazing! Can you shed some light on the design and gear used throughout the space?

So, all the room have Midas consoles in them, which are all Venus series. There are different sized boards depending on the size of the room, which goes up to a thirty-two-channel board in the large rooms. You’re also able to record your rehearsals too if you bring your laptop into your rehearsal and can record directly from the console. All of our rooms are either NEXO, Quest through most of the rooms, with a Coda rig in two of them and a couple of RCF rigs as well so there are a few different options depending on what you’re after. The panelling in each room is quite similar, which was all produced by Ultra Phonic, as well as them doing the design and placement of the panels in each room as well. All the rooms are fully treated with double doors to help minimize noise bleed between the rooms. They’re all great sounding rooms.

Whilst we’re on gear, what backline do you have available for bands to hire for rehearsals?

That’s awesome! How would you describe the vibe at Wick Studios? It feels like a really inclusive space.

We try and be as inclusive as possible at The Wick, keep the place nice and clean, it’s a pretty modern, industrial sort of space. It’s a very Brunswick kind of design, concrete and natural wood. And we sell beer on tap, so if that doesn’t get everyone excited, I don’t know what will [laughs].

Since the renovations and reopening in 2015, how have you seen Wick Studios grow?

For me personally, I started as a casual here and have been full time for a couple of years now. We have fourteen rooms in total and we’re at the point now that we’re pretty much booked out a week in advance, it’s awesome! It’s good to see the rooms bustling and struggling to fit everyone in, obviously, we do like to fit everyone in if we can. We’ve been going from strength to strength at the moment, which is great to see.

Can you share any favourite sessions you’ve had in the recording studio at Wick?

The first memorable session that springs to mind is my most recent one, coincidently, which was for Yothu Yindi a couple of weeks ago. It was a vocal tracking session and a yiḏaki tracking session, which was lots of fun. There were quite a few people in throughout the day, lots of good vibes. It was my first tracking a yiḏaki and Kev the player was exceptional, it sounded great! It was really exciting to get some traditional, indigenous sounds come through here, hopefully, I can some more of those experiences under my belt soon.

Were there any particular pieces of gear you utilized to help capture the nuances and intricacies of such an instrument?

Yes, so during that session, and pretty much every session I use the Neumann M49, which is an original. Quite an old microphone, and it doesn’t really matter what you put in front of it, it’s always going to sound great. So that’s the go-to for sure.

There’s a rather impressive collection of outboard gear in the control room, which includes a Universal Audio blue stripe 1176, lots of DBX compressors and more, can you tell us a little about the collection?

Yeah, the DBX stuff has been accumulated from one of our engineers live days, we’ve got some nice vintage Yamaha and Lexicon reverb and delay units, the Universal Audio 1176, an SPL Frontliner, we’ve got some decent stuff here for sure. The main go to would be the Avalon VT-747SP’s. There’s four of these racked up here and another two that are in a flight case ready to go out on the road, so Avalon’s are the favourite here at the moment. Hopefully, maybe an (Empirical Labs) Destressor in the next few months would be great I reckon, it’s the one thing I’d like to see in here.

How about the range of amps, kits and more you have available for studio sessions?

We’ve got a decent collection of guitar amps available. Some of them are usually personal use only, but we’ve got an Orange Retro50, a Mesa Boogie Triple Rectifier, some Marshall JCM2000’s, we’ve also got some ENGL, Laney, KMD, all the usual suspects. Plenty of cabs, Sonor drumkits in the studio, yeah, we’ve got it all here for ya. 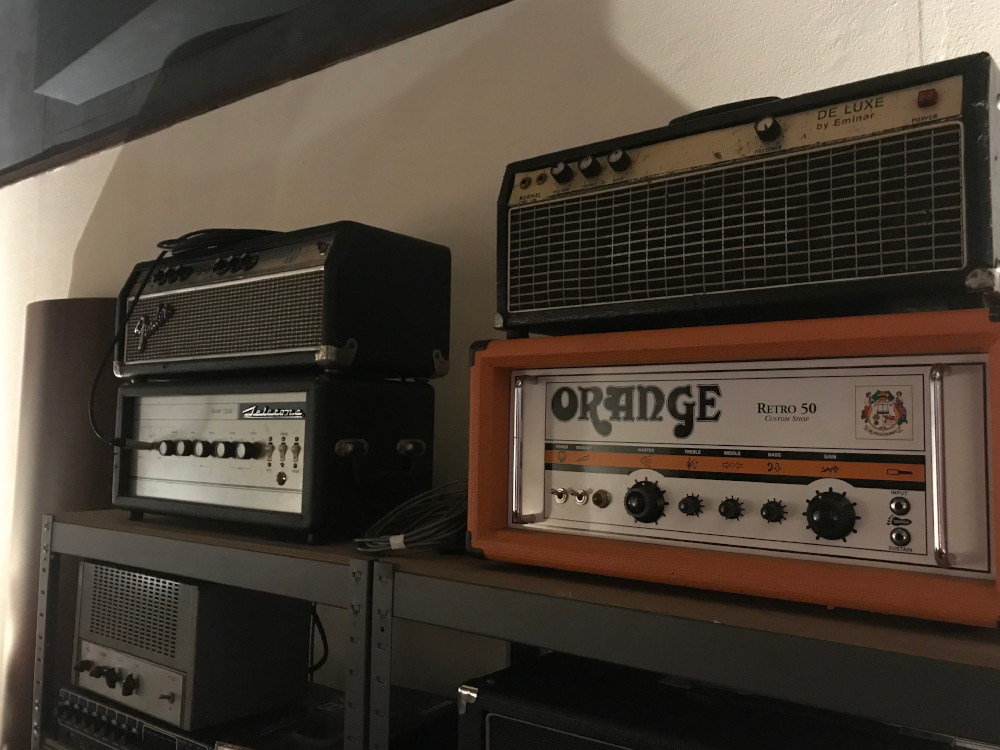 Why do you think bands, musicians and creatives choose Wick Studios?

I think people come to Wick Studios because we’ve set up a really good vibe here. We’ve got a nice crew of staff who are always friendly, engaging and happy for a chat. We’ve got the beer on tap as I mentioned, which everyone seems to love and they’re just great sounding rooms with great gear, so I think you can’t go wrong.

How can people reach you to find out more about the studios, the unique services you offer and what’s coming up?

The easiest way to get in touch with us is via the website, which is www.wickstudios.com.au We’ve got a bunch of info about the place and you can get a bit more of an idea of what we offer here. To keep up to date with what we’re doing, our Facebook page is the best place to visit for that info. If you just search Wick Studios on Facebook you’ll be able to like and follow us there.