It’s hard to beat the sound and workflow of a good analog desk, but it is [insert current year here] and the very nature of a fundamentally analog design means they can feel like a big technological step backwards and you’ll likely end up relying on racks of outboard gear to get all but the most basic of mixing jobs done.

Digital mixers are of course super convenient with all their extra features blurring the line between what’s possible on stage compared within the studio but it’s easy to end up losing much of what we love about analog mixers in the process.

This is where the hybrid mixer concept really shines. The idea is to retain all that analog goodness and add just enough digital functionality to substantially enhance the experience without diluting it, and the new Korg Soundlink series might be the best implementation of this we’ve seen.

First of all, the term ‘hybrid’ can be interpreted as a double entendre by the fact that the Soundlink MW series is a collaborative effort, with Korg enlisting the design ingenuity of Mackie founder and industry pioneer Greg Mackie as well as his former Mackie partner Paul Watts, both of whom went on to found M&W Pro Audio.

Despite their traditional analog appearance, the Soundlink series is far more than just a Mackie mixer with some Korg effects thrown in for good measure. Here are five features that really took us by surprise.

As far as 16 and 24 channel mixers go, the Korg Soundlink series is pretty compact so we were surprised to find out how much they share in common with the classic Trident series of consoles. As well as sharing a lot of sonic DNA thanks to the involvement of Peter Watts who helped design the Trident series, they have an 8-bus design which is something you rarely see on anything other than big analog desks. With 8  busses or groups at your disposal, you can create up to 4 stereo subgroups with dedicated faders and individual analog outs, so you can do basic things like creating groups of instruments like vocals or drums and control them all with one fader, or via the direct outs, send them anywhere you like such as 8 channels of a multitrack recorder. These groups are in addition to the 4 dedicated auxiliary channels and effects section so you don’t need to sacrifice any monitor mixes or effect sends to take advantage of them.

Speaking of things you only normally see on big consoles, mute groups are a great example of the sometimes subtle side of the Soundlink series’ digital capabilities. There’s no digital processing going on here so to speak, rather just digital control of analog functions. While you don’t have the total mix recall of a completely digital desk with motorized faders, you do get the next best thing, and that is the ability to quickly mute and un-mute different groups of tracks really quickly, instead of pressing each tracks’ mute buttons individually. A concept otherwise known as mute groups. 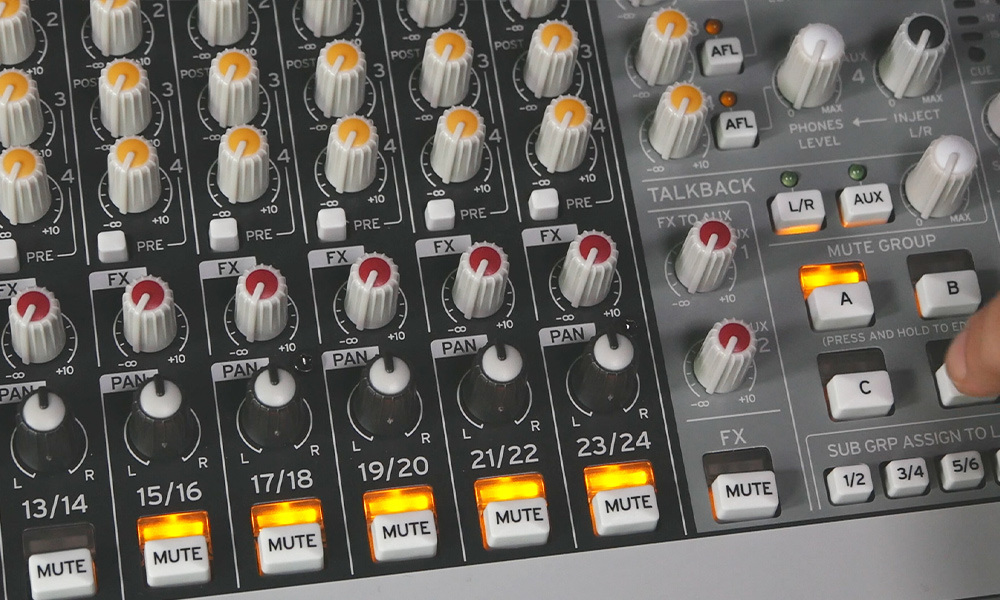 It’s not unusual to use auxiliary sends for on-stage monitor mixes so musicians hear only what they need and not what the audience is hearing. You can easily create custom mixes each channel’s aux send knobs, then control the overall level of each mix via the aux master section which sends each mix out to stage monitors via the 4 XLR outputs on the back.

This is where the Soundlink series gets a little different and kind of brilliant. To the right of the aux master section is a pair of musician’s phones knobs, which takes the signal from the aux 3 & 4 mixes respectively. This signal, however, gets routed to the pair of appropriately labelled ¼” outputs underneath their XLR counterparts. The difference here is that you can use the ‘Inject L/R’ knobs to add a desirable amount of the mixer’s main mix i.e. what the audience is hearing, into the musician’s custom monitor mixes. That’s amazing!

So far we’ve been talking a lot about Mackie’s contribution to the analog side of things, but of course, there’s a lot to cover on the digital side and that’s where Korg comes in.

Digital processing is divided into three categories. Dynamics, Equalizer and DFX or digital effects. DFX is where you’ll find all the Korg supplied reverbs and delays as well as chorus, flange and even an exciter, and they all sound top-notch, from lush hall, and plate reverbs to authentic-sounding tape delays, and some great sounding algorithms based off Korg’s iconic SDD-3000 digital delay. Dynamics covers compressors, limiters and gates and can be applied to the main mix or aux 1 or aux 2, individually or simultaneously, just like the digital graphic EQ and the feedback suppressor. The 9 band graphic equalizer can either work in a wide mode which is great for making more dramatic tonal adjustments or narrow mode for a more surgical operation in which each band is customizable.

One of the first things you’ll notice is just how easy this mixer is to use. Digital mixers often involve not only a steep learning curve but also a different way of thinking to operate with basic functions buried under menus.

The Soundlink series feel analog through and through. The digital controls at the top right are simple and immediate with very large clear easy-to-read text. The overview button shows you everything that’s being processed on one screen, and the spectrum analyzer gives you a detailed visual look at everything going on in your mix. Finally, everything from the effects to the mute groups can be saved and recalled as scenes via the global menu.

If we had any gripes it would be that they are definitely on the bulky side with their notably tall rear panel. That being said, we are talking about 8-bus mixers here and compared to anything else on the market, they maintain a remarkably compact footprint. Albeit a rather girthy one.

All in all, the Korg Soundlink series is a powerhouse for the price and would suit any small to mid-sized venue looking for a desk to bring their sound into the current year, or those after a small desk with features comparable to the larger Digico or Behringer desks. Even though it is primarily geared towards live sound reinforcement, its high-quality mic preamps, 32-bit Korg digital effects, flexible monitoring options and 8-bus design means that this mixer would not be out of place in a studio when coupled with an audio interface or standalone recorder. This style of the hybrid mixer may become the new norm for small/medium-sized venues as it rolls many features usually requiring outboard gear (graphic EQs, limiters and effects) into one effective standalone unit without losing its highly desirable analog sound and style.