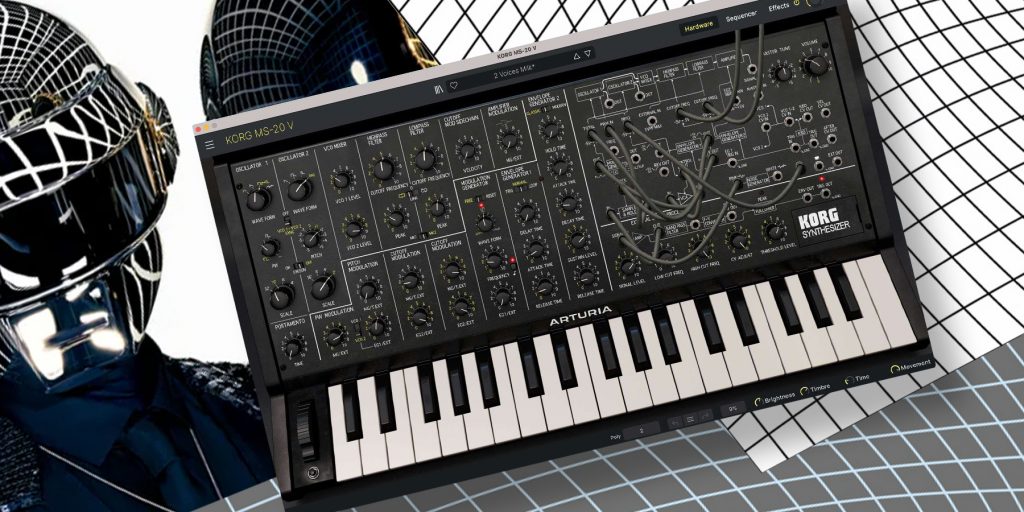 This isn’t the first time however that we’ve seen a software recreation of the MS-20, as it was one of the star attractions (along with an MS-20 Mini-sized MIDI controller) of KORG’s own Legacy Collection software bundle released nearly 20 years ago.

On a personal level, hearing KORG’s Legacy Collection MS-20 for the first time, was the first time I remember being truly impressed by a software synthesizer. It sounded like an analog synth, so was curious as to what Arturia could bring to the table.

As expected, Arturia’s KORG MS-20V sounds just like an MS-20, which is of course a good thing, but it also offers a number of advantages over the original hardware.  Most notably, we now have a 6-voice polyphonic MS-20 and there are plenty of presets showing off the kind of amazing sounds this can facilitate. Arturia also supply both MS-20 filter variants from earlier and later production models via a 2 position switch. Both are superb, but one is noticeably more aggressive for that characteristic MS-20 screech. Again, this is a good thing.

There’s also a retractable SQ-10 inspired sequencer which can be used to modulate almost anything via MS-20’s patch bay, and an impressive multi-effects section with some especially great sounding distortion and overdrive modules. And the list goes on.

The signal processor is indeed fully functional, and audio from your DAW can be easily inserted, appearing at the EXT OUT jack. This is great for using the MS-20 as an effects processor, or for subtle to chaotic feedback by patching in the MS-20’s own output.

All in all, it’s an incredibly powerful synth and invaluable addition to the V-Collection lineup. To this end, we thought it would be fun to build an entire Kavinsky/French House inspired track, drums and all using only KORG MS-20V plugins.
So check out the video to hear how this turned out, and get some insight into the sound design process.