The Fundamentals of FM Synthesis Explained

FM synthesis is a wildly powerful method of synthesising sounds with a different approach to the more common subtractive synthesis found in analogue and analogue-style synthesisers. It is inherently more complex and less predictable, but rewarding to learn. Many of the timbres achievable with FM synthesis simply can’t be done with subtractive methods. Armed with an understanding of some core concepts outlined in this article, you’ll be well on your way to achieving FM sound design nirvana.

FM stands for frequency modulation. Frequency modulation is simply the practice of using a signal to change the frequency (pitch) of an oscillator. The most common example of this is using a slow LFO to add a vibrato effect. But what happens if you speed that LFO up?  As the speed of your LFO rises, eventually the vibrato effect becomes indistinguishable. When the LFO starts hitting very fast rates, it becomes an audio signal itself. Using an audio signal to modulate another audio signal, results in a complex meshing of the 2 sound waves’ harmonics. Increasing the amplitude of your modulating signal, results in a wilder, more harmonically rich sound. This practice is the core fundamental building block of FM synthesis. 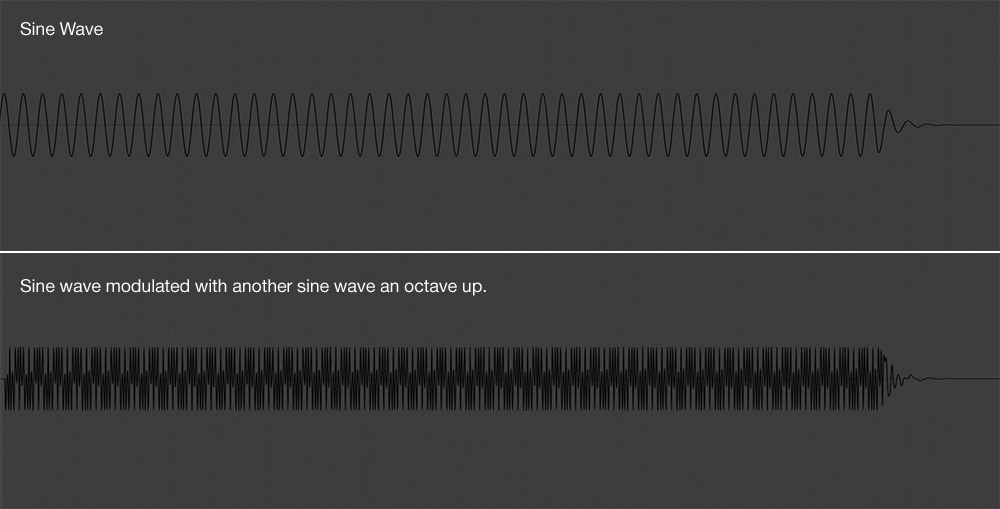 In the below audio example, you hear me bring in some audio rate frequency modulation with 2 basic sine waves.

Using any old piece of audio to frequency modulate another, isn’t likely to generate particularly musical results (though it’s certainly fun!). In the context of FM synthesis, simple tuned sound sources tend to work best. In fact, the classic DX7 only uses sine waves. The actual method used by your synthesiser to frequency modulate also needs to be linear, not exponential. Deep diving into linear vs. exponential FM synthesis is beyond the scope of this article, but the key takeaway is that using linear frequency modulation to combine two tuned oscillators results in stable and correct tuning across notes. Exponential does not. If you’re using a dedicated FM synth, this isn’t something you need to think about, it will be set to linear. But if you start tinkering with audio rate FM on an ordinary analogue synth and wonder why the result is different, that is why. The video below is really excellent if you’d like to know more.

Perhaps the biggest hurdle in FM synthesis, is the jargon. Words like operator, carrier, modulator, ratio and algorithm will make many creative types understandably shudder. This is a bummer because all this nonsense is easily explained. Let’s simplify them.

This 2 operator diagram from Wikipedia looks awful huh? It’s actually very simple though. All it’s really showing is using an oscillator to frequency modulate another.

Operator
Operator = an oscillator and its associated amplitude envelope generator (EG  on the diagram above). For practical purposes, you can basically translate Operator to oscillator to simplify things.

Carrier
The Operator (oscillator) that is being modulated. Easy to remember because it “carries” the modulating Operator and outputs the audio.

Modulator
The Operator that is modulating the Carrier. Makes sense right? Without the volume raised of the Carrier, you will not hear the Modulator as you only hear its effect on the Carrier.

Ratio
Ratio = tuning compared to the input note. Turning the ratio up, pitches the operator up. For example, if the ratio is 2:1 on a Modulator (often just written as 2) and the Carrier is at 1:1, then the Modulator will be an octave higher than the Carrier and introduce sharper harmonics.

Check out what happens to our wave shape when we FM our carrier with a modulator set to 16:1 with a short envelope. For every cycle of our carrier, there are 16 cycles of the modulator introducing high frequency harmonics (listen below). You’re not gonna get a wave shape like that with that analogue synth!

Algorithm
The algorithm is simply the signal routing of your Operators. If the word algorithm induces a thousand mile stare and high school maths flashbacks, simply think of these as routing presets. This leads us to..

In my above examples, I’ve only mentioned the use of two operators; a carrier and a modulator. But what if we add more operators? What if we use another operator to frequency modulate the modulator? What if we create a feedback path and use a carrier to modulate it’s own modulator? This is where the strength of FM synthesis lies and where it can get really deep. The classic Yamaha DX7 had 6 operators to work with and 32 preset algorithms. That’s already a ton to play with, but the possibilities are almost endless. 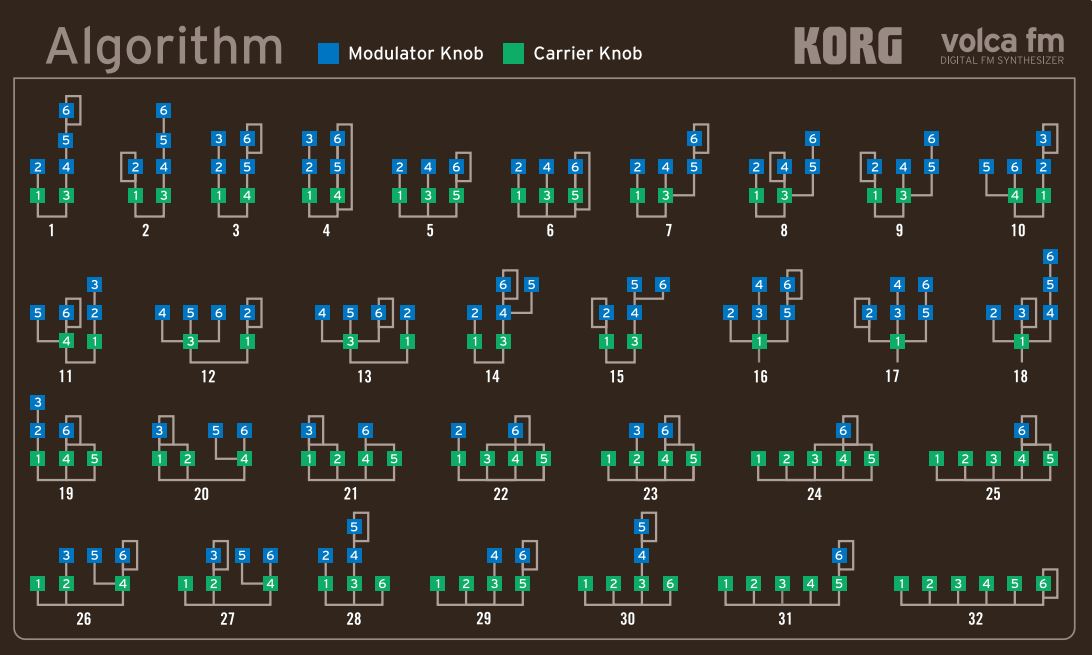 The Volca FM comes with a nice chart displaying the available 32 algorithms. The green blocks are the Carriers and are what you actually hear. If you look at algorithm 1, you’ll see 2 carriers, Operator 1 and 3. Operator 1 only has Operator 2 modulating it. However Operator 3 has much more complex modulation. Operator 6 modulates 5, which then modulates 4 which then modulates 3. There is also a feedback path circling around Operator 6. So with 3 operators modulating it, Operator 3 will be able to generate some wild tones! Interestingly, algorithm 32 features no modulators, only carriers. This means you’ll just hear 6 unaltered sine waves, when different ratios (tunings) are applied to each one you’ll end up with tones like an organ.

Modulation is a key consideration of synthesis in general, and many of the ideas found in subtractive synthesis still apply. The main new consideration is that every oscillator has its own amplitude envelope, on operators tasked to being a Modulator, the envelopes modulate the amount of frequency modulation occurring to a Carrier operator. For example, when making a plucky guitar type sound, you might consider making the Modulator’s envelope have a quick decay, so the note is nice and harmonically rich when struck, but becomes simpler as the modulator fades out and just the carrier’s pure signal remains.

Arturia’s DX7 V software synth gives you easy access to the each Operator’s amplitude modulation envelopes. On modulators, this controls the amount of frequency modulation over time as each note is hit.

With a basic understanding of the above terms and concepts, you’re well equipped to dive into FM synthesis. Of course, a bunch of words on a screen are no substitute for actually digging in and playing with a synth, and over time you’ll start to be able to predict what ratios and algorithms will generate what results. Korg of course have their fantastic new ‘Opsix’ synth that takes these concepts and builds on them in ways no other synth has previously – check out the video below. Korg also have the little Volca FM, Elektron have the excellent Digitone, Arturia have the fantastic DX7 V software emulation and there’s more options popping up all the time. Time to dig in!