Tis the season to start saying otherwise socially objectionable things like ‘tis the season’ and what better way to celebrate this particular season than rampant shopping.

Christmas time is all about turkey and pudding, but there’s always room for bangers, especially if you or someone in your household has a room full of powerful audio equipment. So if you’re a fellow synth appreciator, or if there’s a special someone in your life with a special place in their heart for electronic musical instruments, this tis the list for you. Don’t let the little speaker fool you. Hook these suckers up to a set of studio monitors (or PA system) and strap yourself in, and no synth from the expansive Volca lineup demonstrates this better than Volca NuBass. The built-in NuTube is a vacuum tube for the 21st century, and unlike most tube equipped instruments, this one’s used to generate the oscillator signal for a thick, rich tone, as well as in the effects section for smooth natural overdrive. The result, one serious acid bass machine! Analog hardware probably isn’t the first thing that comes to mind when one mentions Italian software maestros IK Multimedia, but their little monophonic desktop UNO Synth has made a big splash since its release.  IK partnered with Sound Machines to make their first analog synth and even decided to manufacture it themselves in Italy. Not bad given the ticket price.

UNO Synth could be the perfect first analog synth, or simply a great choice for something compact, portable, and affordable to add to a collection. 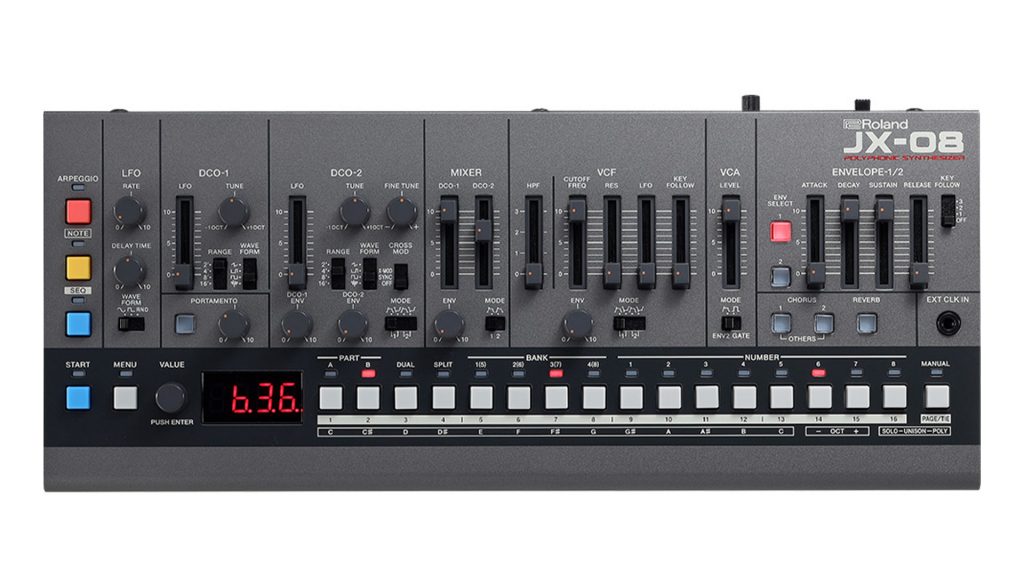 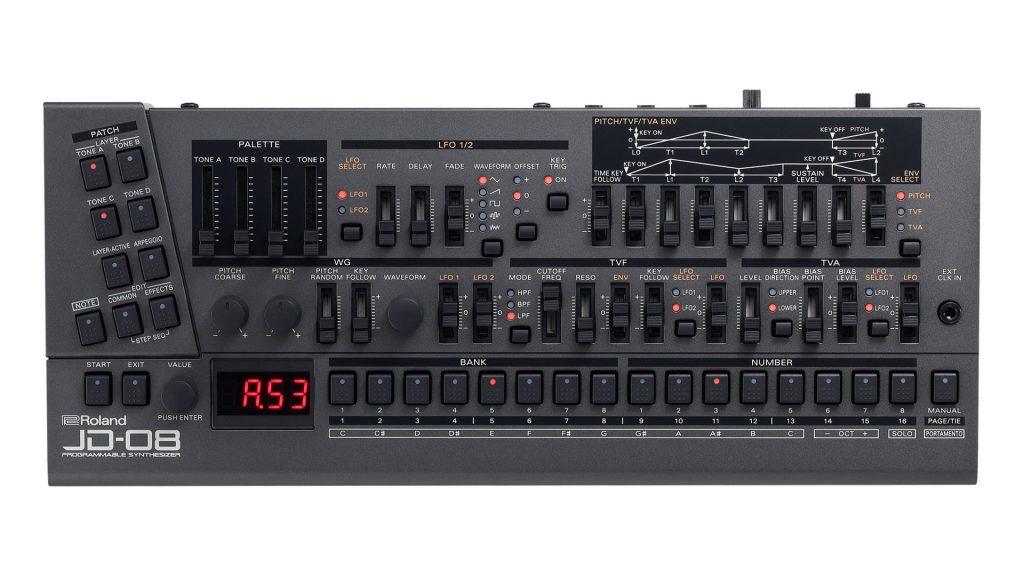 Ok, we’ve squeezed two cheeky entries into this spot and they’re right on the edge of what can really be considered stocking stuffers, but we’re so happy to see them bought to life by Roland, we couldn’t resist adding them to our list. They’re a little more expensive than our other entries and possibly more difficult to get hold of before Christmas being only just announced, but if you do manage to secure one and it’s not beyond your budget, there’s no going wrong with one.

The JX-08 is a miniature digital recreation of Roland’s JX-8P analog poly-synth from 1985, while the JD-08 recreates their digital JD-800 from 1991. Perhaps not as well-known as some of Roland’s other big hitters (Juno-6, Jupiter-8 etc.), but these two synths have legions of dedicated fans, and for good reason.

The JX-08 will bring you classic 80s goodness with the kind of modern enhancements we’ve come to expect from Roland’s Boutique series (USB MIDI/Audio, expanded polyphony, multi-timbral etc.) but also improved usability thanks to an expanded panel interface based on the companion PG-800 programmer unit.

JD-08 delivers the unmistakable sound of the late 80s / early 90s with a digital synth engine derived from Roland’s legendary D-50, courtesy of their short-lived but highly impactful L.A. synthesis. The JD-800 was as well known for its impressive sound as it was for its imposing stature with control laden front panel.

Either of these will make a cherished addition to any synth arsenal if you can find one! 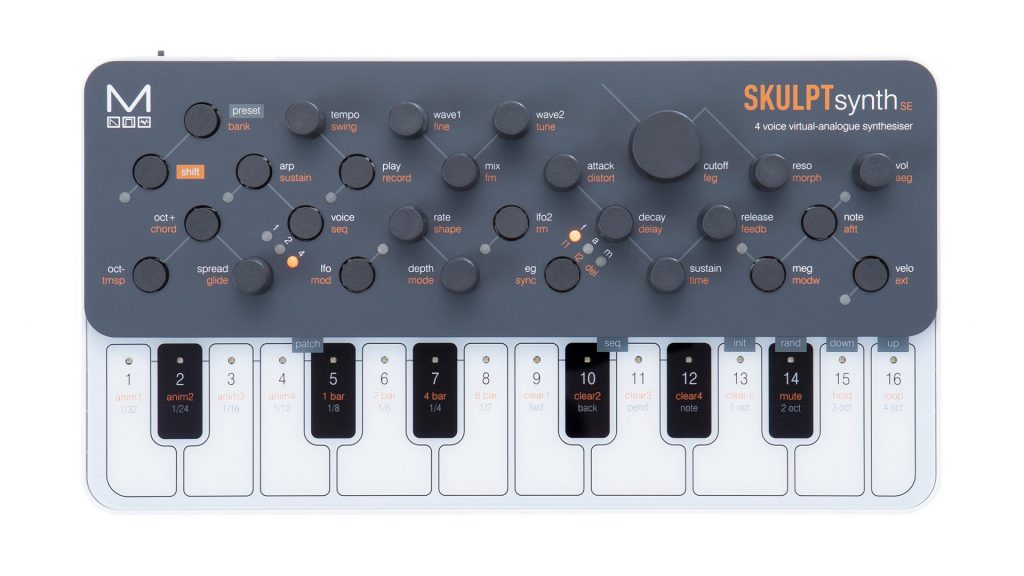 I struggle to think of many serious 4-voice polyphonic synths which could genuinely qualify as stocking stuffers, but Modal Electronics’ SKULPTsynth SE ticks all the boxes. The original SKULPTsynth blew our Christmas socks off with its powerful virtual analog engine, and now it’s had a new paint job, comes packed with all new presets, and perhaps more importantly, has dropped in price (and has the letters SE added to its name).

What hasn’t dropped is its sonic prowess, SKULPTsynth SE still packs a whopping 32 oscillators (8 per voice) into an amazingly compact chassis. It’s great for polyphonic playing, or you can stack them all in unison for apocalyptic basses and leads. Play it using the built-in touch keyboard on the go via battery power, or hook it up to a computer or controller where it responds to aftertouch, and even MPE. And why stop at one? You can daisy chain up to 4 units for a frankly outrageous 128 oscillators, and 16 voices. Holy moly! 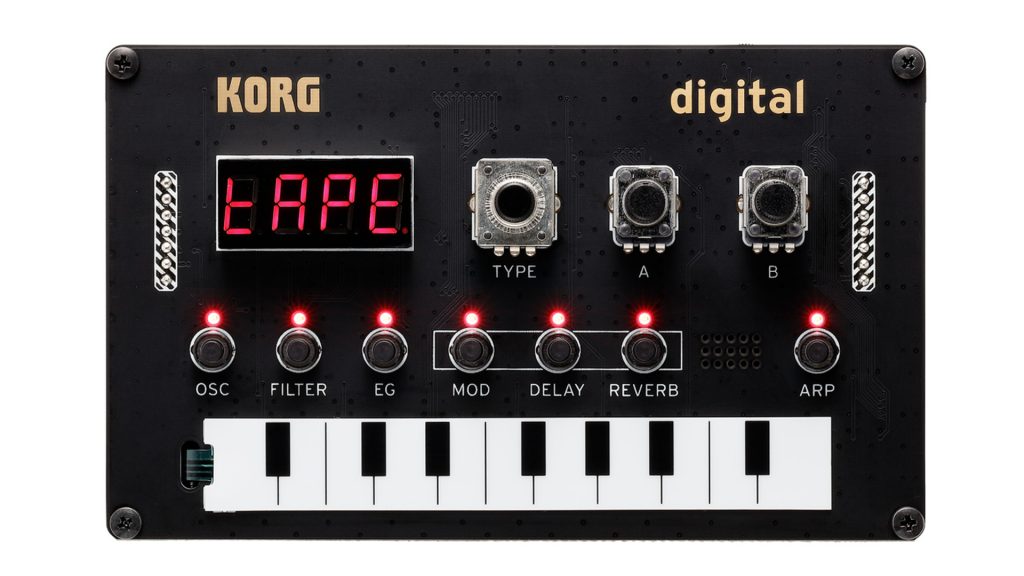 It’s hard to think of a better candidate for stocking stuffer synths than Korg’s highly capable, yet ultra-affordable and compact NTS-1 programmable synthesizer kit. As well as using the amazing sounding digital oscillator and effects from Korg’s prologue and minilogue xd synths, NTS-1 is user assembled, DIY style. So why not grab one for each member of the house and make it a family activity?

The programmable multi-engine oscillator at the heart of NTS-1 has exploded in popularity since its launch so there’s no shortage of content from pro developers and sound designers to expand and even transform NTS-1’s personality.

For the budding developer, Korg have a series of tutorial video to help you build your own effects, or take things to the next level with the optional Arduino IDE compatible custom panel to add extra functionality or integrate other hardware. Korg have an entire website and plenty of resources dedicated to helping you customize NTS-1 and other Nu:Tekt devices, so assembly is just the first step of what may be a very long and fulfilling journey. 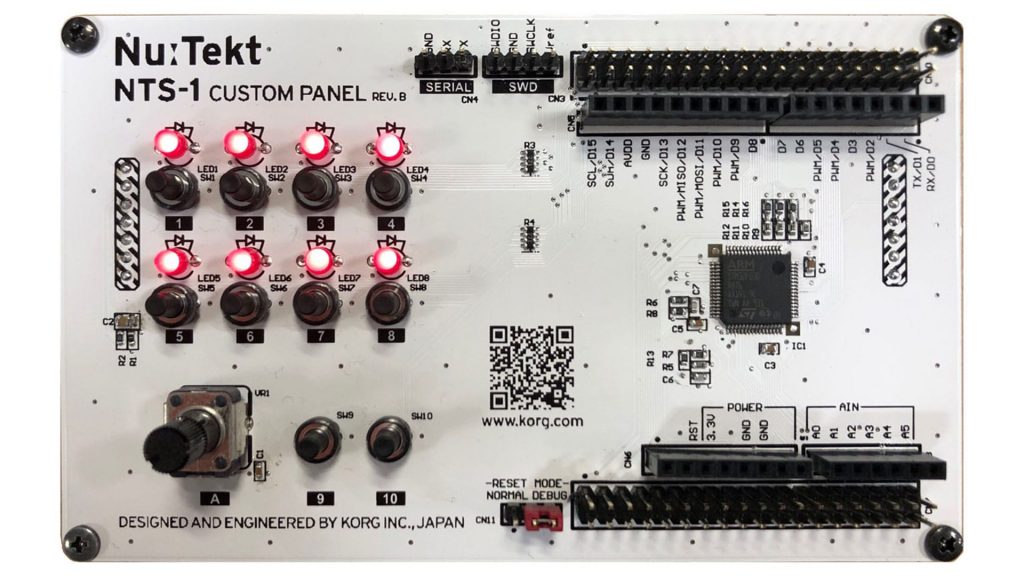