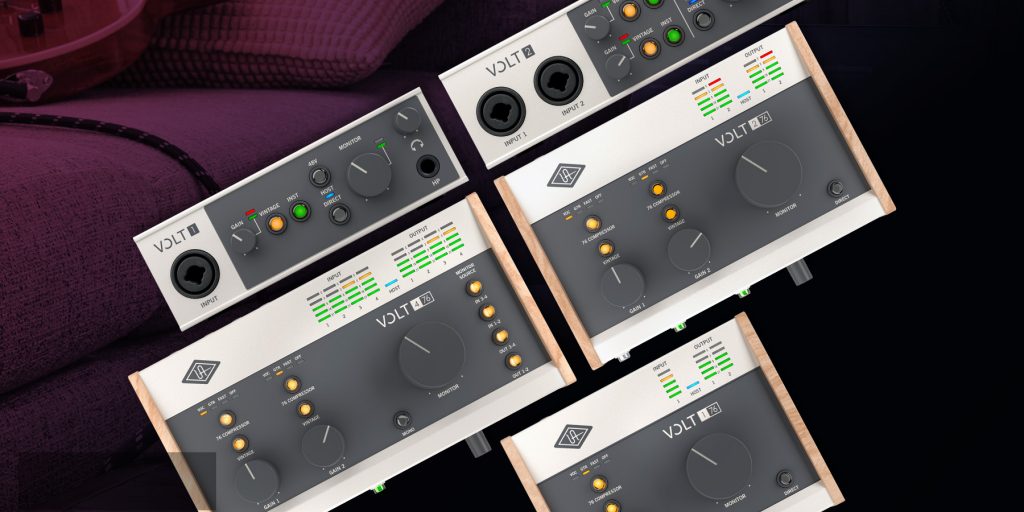 Universal Audio have announced Volt, a new range of USB audio interfaces and recording bundles with an impressive feature set, at a price lower than you may expect.

The Volt range consists of 5 audio/MIDI interfaces that connect via USB Type-C (USB 2.0, not Thunderbolt), with a variety of features and I/O options. All models are cross-compatible with Mac and PC as well as iPhone or iPad. Two of the models are also available as ‘Studio Packs’ including a condenser microphone and pair of headphones, all carrying the Volt moniker. 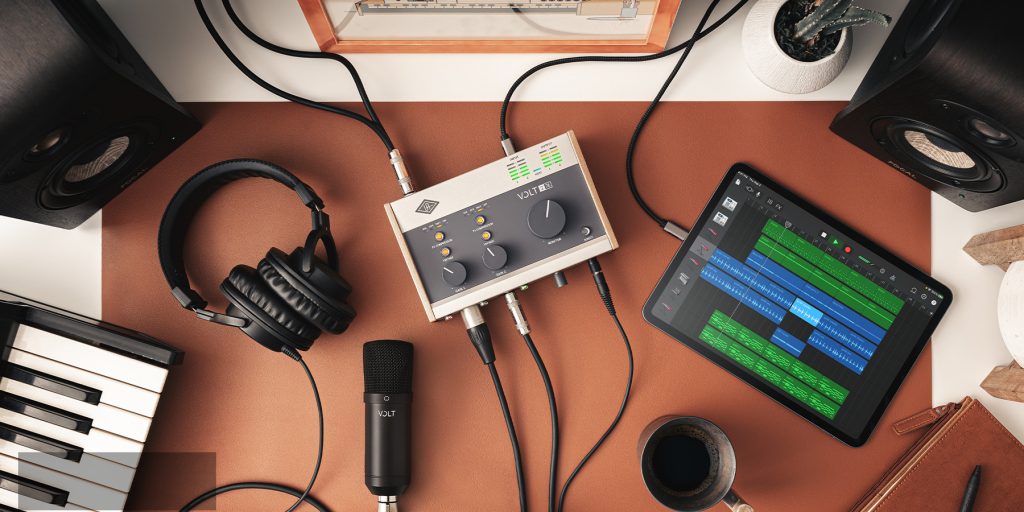 This is an interesting move from UA who have been in the audio game for a long time, with a well-earned reputation as manufacturers of premium audio products. It might go without saying, but premium rarely translates to cheap and UA products are, on the whole, priced accordingly (and reasonably so.

Now with Volt, UA are poised to challenge that notion with interfaces starting at under $300 AUD. Even their entry-level Volt interfaces available with either one or two mic preamps (named Volt 1 and Volt 2) pack an impressive feature set, beyond what we’re used to seeing at this price point. 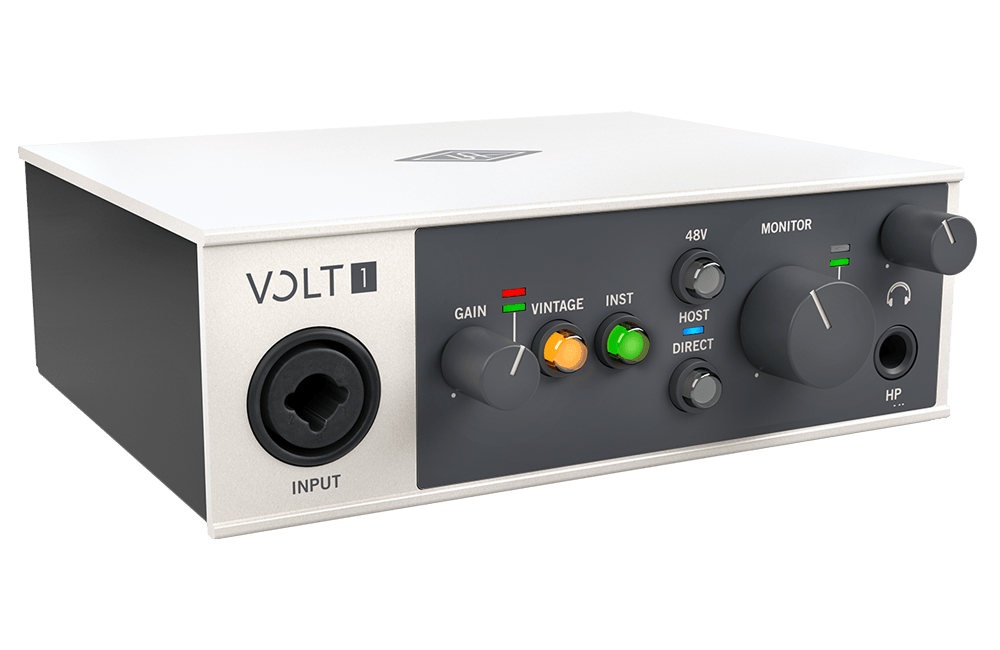 Interestingly, they boast a ‘Vintage Mic Preamp Mode’ modelled after their own 610 preamp, which in UA’s own words “gives you the rich, full sound of this classic UA mic/line/instrument preamp”. This analog tube emulation circuit can be optionally engaged in either of the mic/instrument channels via a dedicated front panel switch. Most intriguing. 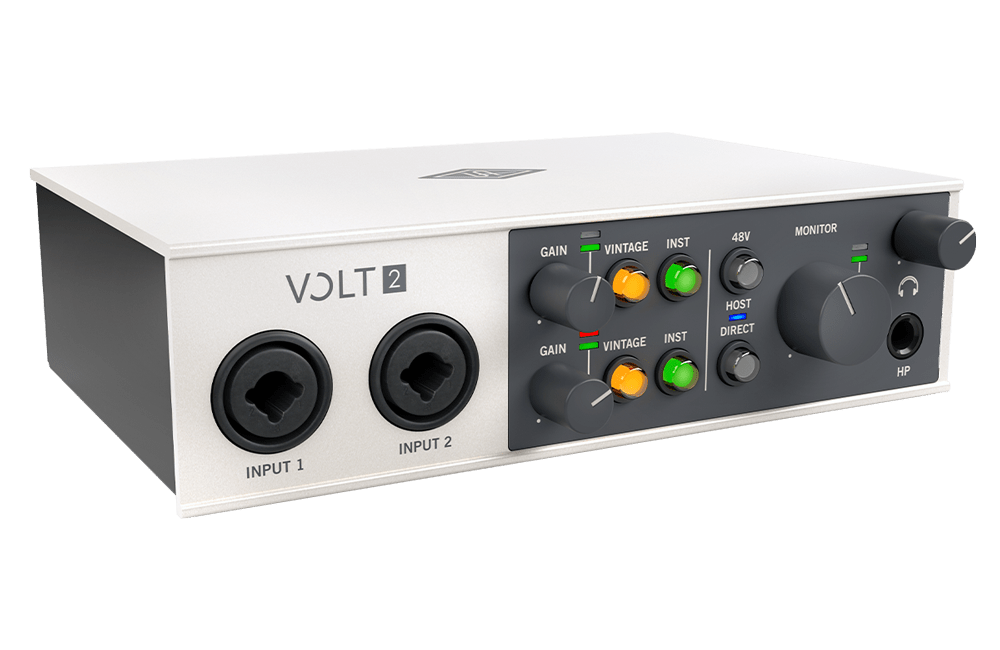 The next family of Volt interfaces known at Volt 76, start at a slightly higher price point and consists of 3 models: Volt 176, Volt 276 and Volt 476. They feature everything from the more affordable Volt range, as well as an onboard compressor circuit derived from (surprise surprise) UA’s classic 1176 Limiting Amplifier. Compressor operation is handled via four top panel buttons with presets suited to voice, guitar, a fast mode (drums etc.) and bypass.

Volt 76’s appearance also distinguishes it from the standard Volt models with top panel preamp/compressor controls and vintage styled wooden side panels. They look great and well aligned with other UA devices such as the OX amp top box. In addition to the smaller 1 and 2 input models (Volt 176 and Volt 276), there is also a larger 4 input model (Volt 476) with an extra 2 line inputs on the rear, and a total of 6 lines outputs, including the 2 monitor outputs common across the range.

All models except for the largest Volt 476 are bus-powered, and all feature 5-pin MIDI in and out, and can handle audio conversion at up to 24bit 192Khz.

Backing up a little bit, it is interesting to see the direction that UA have gone with these interfaces, and pretty clever. The market for affordable recording interfaces is huge and very diverse, going well beyond the ‘typical’ UA customer base e.g. singer-songwriters, podcasters, live streamers etc. Regardless, we can assume most of these customers will spend some time recording using a microphone, a section of whom will likely also be recording guitar.

Those particularly interested in outboard gear may be more inclined to look at UA’s higher priced Apollo interfaces with powered UAD plugins offering authentic emulations of many studio favourites. For the rest, Volt has something different and very enticing to offer. It doesn’t take a gear-head to appreciate the value of a good preamp and compressor, and the models from which Volt 76 take inspiration (610 and 1176) are some of the all-time greats, found in many pro studios today. UA’s 6176 outboard processor is a popular hardware pairing of these two, favoured by the likes of Adele, and Chris Martin for vocal recording, but also well suited to applications like an acoustic guitar.

Of course, UA aren’t claiming to be integrating thousands of dollars worth of classic processing circuitry into these Volt interfaces. Nor are they drawing parallels between Volt and the ultra-authentic emulations from their UAD plugin library. And they don’t need to. Being able to apply the character of classic signal processors with the push of a button is just what a lot of fledgling musicians and content creators need to substantially elevate their recordings, and potentially far more valuable than precise control of parameters like compression ratio or input impedance.

That being said, Volt also ships with a very impressive software bundle that will not only support the entire creative process of music production but also scratch an itch for aspiring studio engineers and budding gear junkies.

Ableton Live Lite handles DAW duties, with Softube, Brainworx and Relab supplying guitar and bass amp emulations from Marshall and Ampeg, as well as classic reverbs, delays and compressors for mixing and mastering, and even Celemony’s Melodyne Essential pitch correction.

For virtual instruments, there is ‘Virtual Drummer DEEP’ and ‘Virtual Bassist DANDY ’ from UJAM, as well as Spitfire’s LABS. Overall a mighty impressive bundle covering all aspects of audio and music production.

For those seeking an even more comprehensive package to get started, UA are offering two ‘Studio Packs’ which bundle either a Volt 2, or Volt 276 interface with a large-diaphragm condenser microphone and a pair of studio headphones, as well as a mic cable and stand mount.

All up, this is a big move for Universal Audio. For anyone who’s been waiting for a more affordable way into the UA club, Volt may just be your ticket. Also, with the number of options here at various price points, we suspect there may be an even larger number of Volt customers who have never even heard of UA before discovering for the first time what can be achieved with a high quality audio interface, as well as maybe a microphone and a pair of headphones.

Volt interfaces are expected to arrive in Australia in November. Prices are as follows: