Universal Audio’s Apollo line of professional audio interfaces have been a huge hit with producers and engineers of all levels thanks to their premium sound quality and on-board DSP which powers UA’s exclusive line of impressive hardware modelling UAD plugins.  Since the first Apollo launched back in 2012, the range has substantially expanded and evolved to include the compact yet powerful Apollo Twin desktop interface as well as four variations of Apollo X rackmount interfaces.

The Twin X maintains the features and form factor of the Apollo Twin MKII, but upgrades the A/D & D/A converters to similar to those on the Apollo X rackmount interface range. It also does away with the Thunderbolt 2 port in favour of Thunderbolt 3 over USB Type C. Apollo Twin X is available in either a DUO or QUAD core DSP configuration. 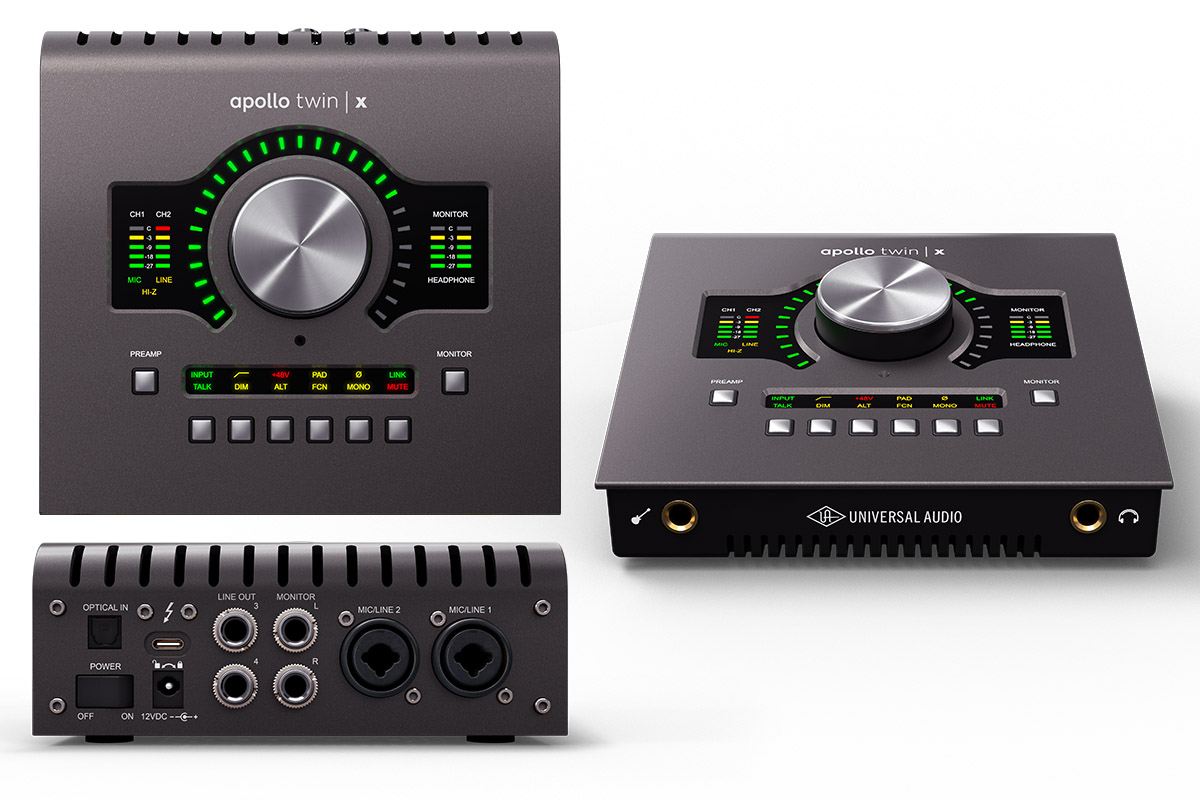 The Apollo x4 changes things up a bit by taking the Apollo Twin’s desktop form factor (albeit with an increased footprint), upping the mic preamp count to 4, and adding a second headphone output. As with the Twin X, the Apollo x4 uses Thunderbolt 3 over USB Type C and has a QUAD core UAD DSP processor.

There’s really something for everyone here and UA has done a good job of streamlining the range with clear distinctions from model to model. If you don’t need more than two mic preamps, the Apollo Twin X will please the discerning home studio operator. For larger studios with more outboard gear, the Apollo x6 offers two mic preamps and six line inputs in a rackmount form, with 6 DSP cores and 5.1 capable analog outs.

For larger studios again, the Apollo x8P has 8 mic preamps, and the x16 has no preamps, but gives you 16 channels of their highest quality A/D and D/A converters — a great option for studios with existing large format recording consoles.

At the other end of the spectrum, the recently introduced Arrow interface provides two mic preamps in a compact bus powered enclosure with a single DSP core on board. This probably won’t be sufficient DSP power to handle an entire mix or UAD plugins, so it is (by itself) more suited to real time processing of input sources such as Unision mic/instrument preamp emulation (UA’s exclusive software/hardware emulation technology). Not only do these mimic the sonic characteristics of classic preamps, but also modify the interface’s physical mic preamp’s behaviour, e.g. impedance and headroom to match the hardware being emulated.

UA went all in with Thunderbolt early on and it has really paid off. Now nearing ubiquity across Macs and PCs, the Thunderbolt protocol uniquely offers the bandwidth required for both multichannel high quality audio as well as Apollo’s trademark DSP functionality whereby all processing of audio by UAD plugins in handled by the Apollo itself, not the host computer. This leads to a more stable DAW environment and an experience more akin to working with hardware outboard gear.

Another advantage is expandability, and UA really stand out from the crowd here by making this process simple and seamless. Up to four UA interfaces can be daisy chained over Thunderbolt with a maximum of one desktop interface (Arrow, Twin or x4). Once connected, your host computer will see one large audio interface, not a series of connected interfaces. Configuration is done using the included Console software.

But it’s not just the audio channel count that is expanded. The total DSP core count is also aggregated and intelligently distributed amongst plugins/channels. Ultimately it’s reassuring knowing that anytime UA release a new interface that takes your fancy, you don’t need to get rid of your older UA interface. In fact it’s better if you don’t because it will compliment your new interface beautifully. Your UA recording rig just became much more powerful and capable.

If you just need additional DSP power and not the extra audio ins and outs, UA also make devices called UAD-2 Satellites which have recently been upgraded to Thunderbolt 3. Theses either connect directly to your computer, or sit somewhere in your Thunderbolt daisy chain and add either 4 or 8 DSP cores to your UAD-2 system.