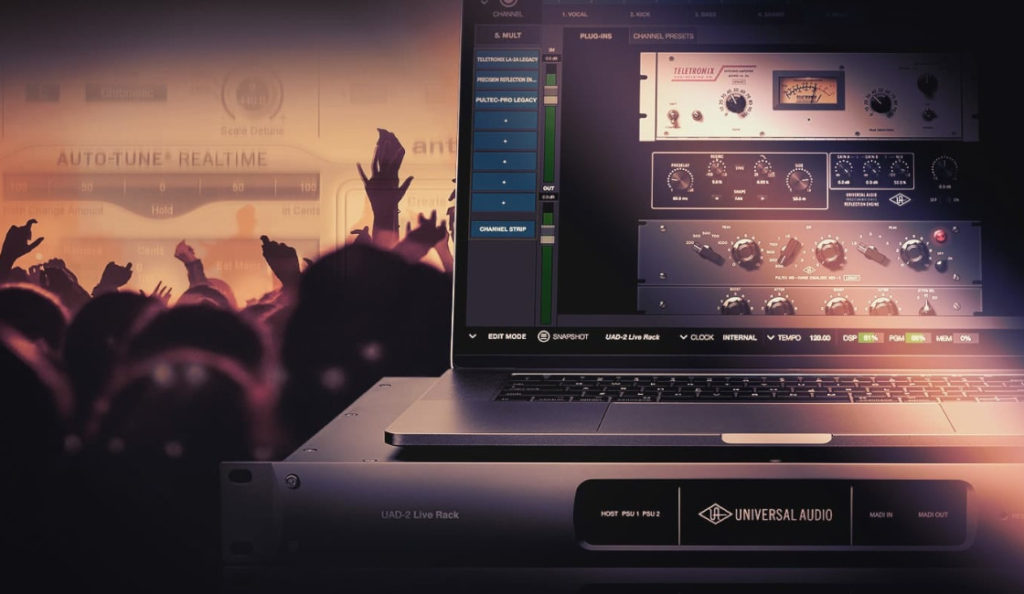 The name ‘Universal Audio’ is legendary throughout the pro audio world, particularly in the recording industry as their founder Bill Putnam was responsible for many game changing innovations including recording techniques, concepts, and of course hardware. These celebrated contributions have been long enjoyed and utilised by recording studios, however their implementation into the live audio world has never been entirely realistic. Or we should say, had never been…

Terms like overdubbing and post-production are of little significance in the live audio world. In a recording studio, individual elements can be laboured over during both tracking and mixing until the desired results are reached. In a live sound environment, there is one take. You get one chance to get it right. This being the case, the preferred way to approach live sound mixing in terms of both technique and gear is drastically different to that of studio recording.

Take for example the classic LA-2A leveling amplifier, designed by Teletronix who were acquired by Bill Putnam’s company ‘Studio Electronics’ in 1967. You will generally find one or two of these in serious recording studio as it is considered the ultimate vocal compressor, with a range of tasty stereo applications. We would be highly surprised however to find one in a live touring rig given the high price and fragile vintage-style construction (we’re talking hand wired valve based T4 electro-optical circuitry). Owners of such processors generally like to keep them safe in a studio rack environment.

Beyond their own hardware innovations, UA have of course pioneered the software emulation of analog gear with their UAD plugin platform which covers a huge range of classic devices from dozens of popular brands. Instead of running natively on regular computers like most plugins, UAD plugins require their own custom hardware equipped with high powered SHARC DSP chips in order to run. These hardware components take the form of either PCI cards, or external boxes called Satellites which connect via Thunderbolt or USB to the host computer. Since these DSP chips are handling all of the processing of UAD plugins, the experience is very similar to using the real hardware. Not to mention that fact that they are sonically almost indistinguishable.

Universal Audio have also released a line of audio interfaces called Apollo which have UAD DSP built right in, and the rackmount variety of these were a step closer to realising live performers dreams of utilising their beloved UAD plugins to perfect their on stage sound. But unlike recording studios, live sound engineers do not generally have a computer at the heart of their setup. The live sound console is a commodity which looks to be safe from being replaced by a laptop for the foreseeable future. This being the case, an audio interface is far from the ideal form factor for a live sound oriented effects device.

This brings us to Live Rack. Introduced in mid 2018, Live Rack is a 1U rackmount effects processor with 4 SHARC DSPs, and 16 channels of processing over MADI. Up to four units can be daisy chained for 64 channels of processing and 16 DSPs (more DSPs mean more plugins can be used simultaneously). Two Thunderbolt 3 ports are present for use with the Mac OS based Live Rack app which operates via a live sound friendly drag-and-drop interface. For and even more live optimised experience, UA have provided a list of tested touch screen monitors which can optionally be connected to a Mac laptop.

It is worth reiterating that the Live Rack App is purely an editor and all audio processing is done by the Live Rack’s onboard DSP. Unlike computers running native plugins, Live Rack does not start to buckle and glitch the more plugins you try to run. You will simply hit a point where it says ‘no more’ and should maybe consider adding another Live Rack which seamlessly increases the number of DSPs at your disposal. To drill the point home that Live Rack is a wholly reliable hardware effects processor, UA have installed redundant internal power supplies, so if one goes down, the entire show doesn’t.

Importantly, digital console integration and automation is well implemented. All plugins being used at any one time are organized into snapshots which can be recalled from any MIDI equipped mixing console. Soundcraft Vi owners are treated to CUE control functionality which conveniently connects via Ethernet.

Live Rack is available in two flavours: Core and Ultimate, the only difference being the number of included plugins. We were delighted to find that Antares’ classic Auto-Tune plugin is included with both bundles so even Ashlee Simpson can take to the stage with confidence. 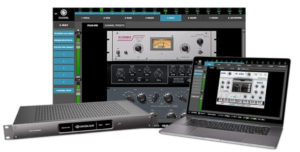 The Core bundle includes a basic selection such as UA’s LA-2A & 1176, Pultec EQ and the Precision Mix Rack Collection. Live Rack Ultimate is an exhaustive collection of over 90 plugins. Some stand outs include the Empirical Labs Distressor, Fairchild Tube Limiter, Korg SDD-3000 Delay and Studer A800 Multichannel Tape Recorder. Visit UA’s website for the complete list.

As with all UAD devices, individual plugins can be purchased from UA’s website, and any plugins you already own are immediately usable with the Live Rack.

Now available in Australia through the Universal Audio Dealer Network: