There aren’t a huge number of analog synth modules on the market, let alone affordable polyphonic modules. So if you already have a master controller keyboard or sequencer, or maybe you’re just short of desk space, the Korg minilogue xd module can add its distinct hybrid analog/digital flavour to your existing rig.

The module is for the most part, identical to the keyboard version aside from the obvious lack of keys and the additional wood and mesh front panel componentry. One new feature on the xd module is the ability to use the sequencer buttons as a keyboard. It’s a minor addition but certainly useful in lieu of an actual keyboard which proves to be especially handy for quickly auditioning sounds. 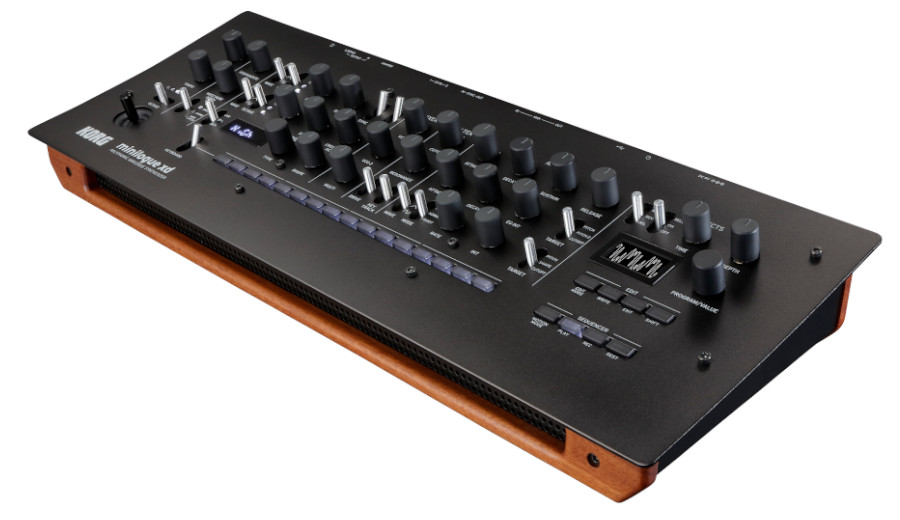 Cleverly, the white keys are lit up and the black keys remain dim resemble the layout of a traditional keyboard. When this mode is activated by the dedicated switch, a little keyboard icon appears on the screen to remind you that the buttons no longer operate the sequencer.

Desktop modules are super convenient for modern music producers, and if you already own a minilogue xd, it’s worth knowing that any combination of multiple minilogue xd modules or keyboard versions can be poly-chained to create an 8 voice, 24 oscillator behemoth. This is most likely going to be a keyboard and a module, but it could also be two modules, or even two keyboards. Just connect the keyboard’s MIDI out to the module’s MIDI in, and via the global settings designated the keyboard unit as the poly-chain master, and the module as the slave. Now it’s like you’ve just added an extra 4 voices to your minilogue xd, except that voices 5 to 8 will come from the audio outputs of our module.

Check out how it sounds –