What is Altered FM? – A Closer Look at KORG’s Opsix Synthesizer

I think it’s fair to say that Korg’s opsix synthesizer has captivated the FM synth community, and for a number of reasons. Despite being far from the first 6-operator FM synth the world has ever seen, it manages to be simultaneously more innovative, and easier to use than just about any FM synth before it.

Korg describes this supercharged FM engine as ‘Altered FM’. But what does that really mean?  First here’s a little FM synthesis refresher:

FM synthesis is basically the opposite of classic analog style subtractive synthesis, in which harmonically rich waveforms like sawtooth and pulse waves are shaped via a filter which unfastidiously removes harmonics. This type of synthesis thrives off imperfection with oscillator drift, detuning and overdriven gain stages all adding to the charm, often resulting in warm, thick tones.

Each of an FM synth’s sine wave generating oscillators is known as an operator and is typically tuned to an exact ratio of a neighbouring operator’s frequency (no room for oscillator drift here). The signal produced by an operator will be used for either modulation (as a modulator) or audio (as a carrier) purposes, depending on how the operators are arranged. This operator arrangement is known as an algorithm.

Opsix’s altered FM concept turns this classic formula on its head with not only a range of operator waveforms to choose from but also a variety of operator modes, all selectable on a per operator level.

Using only sine waves and the basic FM operator mode, opsix will act like your classic 6 operator FM synth, albeit with improved programmability. The operator mixer provides immediate visual feedback by colour-coding channels to clearly distinguish carriers from modulators. This also encourages experimentation as a carrier’s fader will control its level and its ratio potentiometer will control its pitch, whilst a modulator’s fader and potentiometer will instead affect the timbre of its associated carrier.

This is a huge advantage from a usability perspective. Our recent discussion with sound designer Dean Walliss highlighted some of these advantages, particularly when creating complex multi-layered sounds. The colour-coded faders help to quickly identify stacks of operators in a given algorithm as modulator-carrier chains. 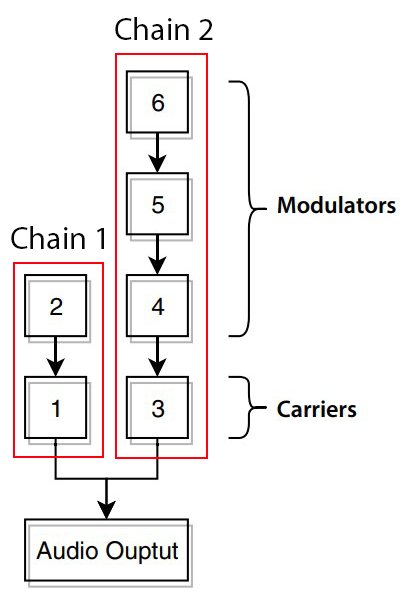 We’ve seen waveforms other than the sinusoidal variety in FM synths before, but they really come in handy in conjunction with opsix’s other operator modes. A prime example of this is  ‘Filter’ mode which adds a subtractive element to the signal path.

The waveform generated by an operator set to Filter mode is blended with the signal from the preceding operators using the operator’s mix knob, and run through one of several resonant filter types, including some tasty emulations including Korg’s own MS-20 and Polysix filters. Keep in mind this is entirely separate from the opsix’s master filter section which filters the sub-mixed output of all operators, per voice. An operator in Filter mode only filters a selection of individual operators.

Choosing a harmonically dense waveform such as a sawtooth wave here may be a good choice, but it can be dialled out entirely using the mix knob, leaving only the signal from the adjacent operator, which would have been acting as a modulator in traditional FM mode. This signal can be very complex depending on the chosen algorithm and each operator’s respective mode, so there’s plenty of scope for experimenting.

The addition of filter mode by itself provides a tremendous level of flexibility compared with traditional FM synths, but it’s only one of 6 available modes. Mode #6  known as ‘effect’ mode was added via a recent update, meaning we may well see opsix evolve further over time.

Effect mode treats an operator like an effect processor, applying one of many available effects to the preceding operators. There are plenty of creative options here via effects such as comb filter and decimator. See our article on the recent 2.0 update for more info here.

The ring mod operator mode grabbed a lot of people’s attention when the opsix was announced, although its behaviour does require a little more explanation. Ring modulation is a variation of audio-rate amplitude modulation where a carrier signal’s amplitude is modulated by a modulator signal. This generates harmonics above and below the carrier frequency known as sidebands which are the sum and difference of the carrier and modulator. In-ring modulation, the carrier frequency is removed leaving only the sidebands, however here it can be re-introduced by backing off the depth parameter.

Things can get out of hand quickly with ring modulation, especially when using complex modulator signals via chains of operators, however, leaving operators tuned in ratios generally keeps everything in tune. The operator’s shape parameter adds rectification for additional harmonics which can also help maintain a sense of pitch.

Wavefolder operator mode adds a bit of west-coast flavour to opsix. Here the amplitude of the combined carrier and modulator signal above a particular threshold is inverted or folded in on itself, thus adding further harmonics. This technique is most commonly used with triangle waves but sounds amazing with a complex chain of operators in various modes. It’s also a lot of fun to visualize via opsix’s oscilloscope.

The last aspect I’ll mention here is the user algorithm function. Out of the box, opsix offers 40 operator algorithms, up from the typical FM assortment of 32. The 41st mode however is user mode which lets you program your own algorithm. This procedure is surprisingly easy to accomplish via the front panel, although you may need to lean in extra close to see all the details of the 6×6 operator grid on opsix’s compact display. Check out our opsix ‘Deeper Look’ live stream below for further insight on creating user algorithms.

So hopefully that gives you a bit of an idea of the tremendous power bestowed by Korg’s opsix courtesy of its Altered FM engine. If you have any interest in FM synthesis opsix is absolutely worth a look, but of course traditional FM is only scratching the surface of it capabilities. Opsix is real treat for nostalgic FM fans and adventurous sound designer alike.