Behind The Score: Suspiria by Goblin

Welcome back to Noisegate’s special series called Behind The Score. We are very excited to present these  bi-monthly investigative articles, which will explore all the nerdy details and behind-the-scenes secrets of your favourite synthesised film soundtracks. We’ve already covered the infamously intricate Wendy Carlos Moog score for ‘A Clockwork Orange’ so once you’ve read this week’s edition, make time to catch up on that one! This week we are delving into the 1977 Italian horror classic Suspiria, and its electronic prog-rock soundtrack by the legendary Italian band Goblin and their fearless leader, Claudio Simonetti.

The opening moments of Suspiria are an exciting foreshadowing of the way aural and visual stimuli work together to create an eerie filmic environment in this 1977 giallo classic by Italian director Dario Argento. As the lead character Suzy Bannion exits the airport, making her way to the Munich dance school where the horrifying events of the film will take place, the sliding doors open and close to reveal a wild storm carrying on outside. With every opening slide of the doors, the tinkling music box chimes of the Suspiria theme begins to play. With every close, it stops. Inside the airport Suzy is safe and dry, surrounded only by the sounds of her fellow passengers. Outside awaits the wild weather and the eerie synthesised musical theme of the film. This theme, the audience will come to realise; signifies danger and death.

The film itself follows American dancer Suzy Bannion as she undertakes study at the Tanz Dance Academy in Freiburg. On the night that Suzy arrives at the school it’s immediately apparent that things are not quite right. As she presses the intercom to the building, a young woman pushes her way out of the building muttering incoherently. We watch as this young woman runs through the forest, takes refuge in a friend’s apartment and is subsequently killed by a mystery assailant. The plot of this film is chock-a-block with twists and turns, so to summarise succinctly is quite difficult… We would recommend a viewing (with the lights on and someone else home if you’re a bit jumpy) for the full experience but lets just say that this dance school is full of bugs falling from the ceiling, secret rooms filled with barbed wire, mysterious illness and [SPOILER ALERT] is run by an ancient coven of witches.

The soundtrack to Suspiria is interwoven with the narrative of the film and is used to create tension in the film even when there is nothing on the screen that would indicate that the characters are in danger. When first approaching Simonetti to work on the film’s score Argento told him, ‘I need the audience to feel that the witches are still there, even if they’re not actually on the screen.’ It is this intentional tapestry of visual and sonic storytelling that makes Suspiria so legendary amongst film and music fans alike. The soundtrack was composed by Goblin to the final cut of the film, meaning that it responds directly to the highly stylised art direction and choreographed gore that is present throughout.

This was not the first time that Claudio Simonetti and Goblin had collaborated with Dario Argento, having scored his film Deep Red (Profondo Rosso) two years earlier. This had come about as somewhat of a lucky break for Goblin, as the owner of their record label also happened to be Argento’s publisher. Argento had initially wanted to work with a big rock band of the time like Deep Purple, Pink Floyd or Emerson Lake and Palmer (of whom Simonetti was a big fan) but his producer suggested he check out this new local band based in Rome, Goblin – then called Oliver (after Oliver Twist!).  In a 2015 interview with Noisey, Simonetti states, ‘His producer said, before “we call these big bands why don’t you come listen to the band I am producing now, here in Rome.” So Dario came into the studio to hear us record and he loved it. He decided to let us write the music for Deep Red. We were very lucky, and so was he, because we sold 4 million copies of the album.’ 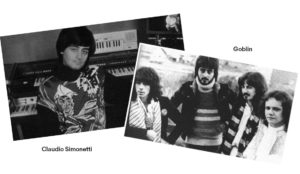 Due to time restraints, the band only had ten days to record music for Deep Red. When it came to writing the music for Suspiria two years later, Simonetti was suddenly gifted with three months of production and recording time. Though the Deep Red soundtrack had been extremely successful, this extra time allowed for the creation of Suspiria meant the band had more opportunity to experiment, and experiment they did. Speaking to Fact magazine in 2014, Simonetti explains ‘We tried to use a lot of ethnic instruments like table and bouzouki, and we did a lot of recording of sound that we created, because in 1977 we didn’t have any sampler’. In addition to this the band began to explore more synthesis, and hired a legendary “big Moog”, a System 55 Moog modular synthesiser. This huge analogue synth was difficult to operate and so the band brought in another composer, Felice Fugazza, to run the instrument. Simonetti states ‘He was very focused with the Moog, he knew how to use it. So everything we passed to him, he realized’. In addition to the System 55, Simonetti also incorporated the Hammond B-3, the Hohner Clavinet and the Minimoog. 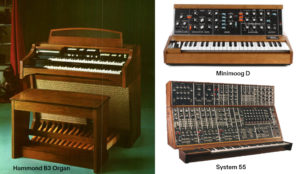 Whilst a few other composers such as Wendy Carlos in A Clockwork Orange had begun to use synthesis in soundtracks, it was still considered a pretty radical practice for the time. This style of composition took more influence from the music of Kraftwerk, Roxy Music and Giorgio Moroder than it did from traditional film scores. The deep pulsating drones and screeching soundscapes that Simonetti was able to capture through this type of synthesis added to the otherworldly nightmarish tone of the film. For the majority of the film the audience is somewhat uncertain if the supernatural elements of the narrative are real or imagined. The sounds created by Goblin for the soundtrack; new and un-identifiable, draw the viewer in to the lead character’s state of mind. Are these sounds real and acoustic or something completely new and unknown? Is Suzy losing her mind or is this dance school really run by secret witches?? Adding to this eerie synthesis is the bizarre lullaby singing that accompanies the theme at many frightening moments in the film. The use of voices across the soundtrack, sometimes at a gentle whisper, sometimes a repetitive shriek of the word ‘witch!’ alludes to the ever-present nature of the witches. Whilst we they do not appear on-screen in their full coven formation until the last moments of the film, the soundtrack lets us know that they exert a constant power over the narrative.

The Suspiria soundtrack had a lasting influence over the world of soundtrack composition. Whilst Goblin themselves were not influenced so much by other film composers, many in their wake have taken inspiration from the scores of Deep Red and Suspiria. Those who have openly claimed Goblin as an influence include Tangerine Dream (Risky Business, Firestarter), Kyle Dixon and Michael Stein (Stranger Things) and the “Horror Master” himself, John Carpenter. In fact, when Simonetti was introduced to Carpenter for the first time in 2012, Carpenter is reported to have said, ‘I know you very well – I stole all your music’.