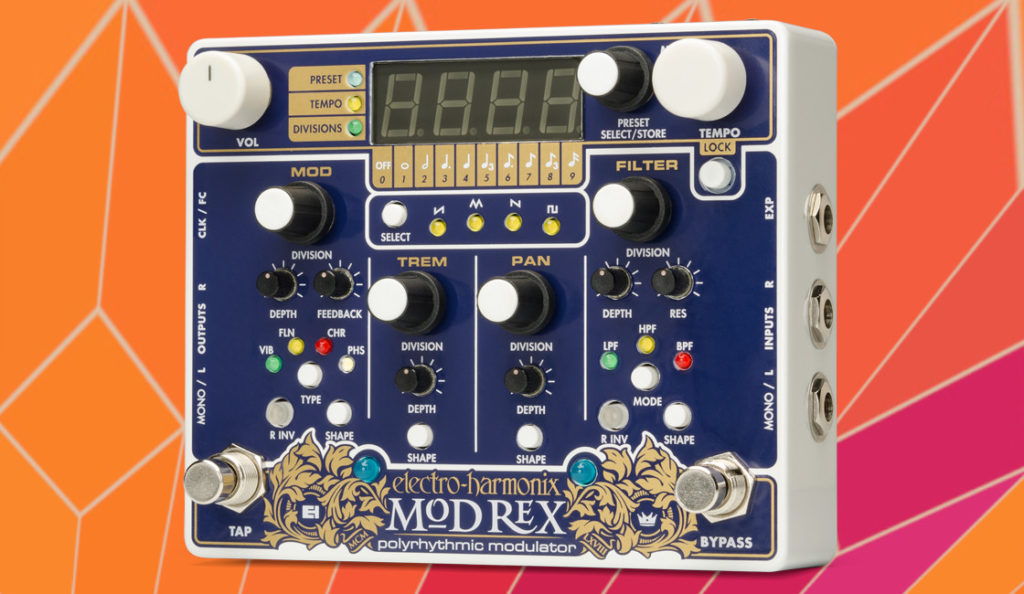 Pedal boasts four separate modulation engines that can be used individually or combined together.

StompBox legends Electro-Harmonix has released the new Mod Rex Polyrhythmic Modulator, a pedal that boasts four independent modulation engines that can be synched and subdivided to a master tempo for seemingly limitless polyrhythmic possibilities.

If that sounds like a mouthful, it’s because it does a lot of heavy lifting in the modulation department, giving you vibrato, flanger, chorus, phaser and more.

It looks like it will be suitable for any guitarist, synthesist or electronic musician and we think it will definitely inspire creativity and stretch musical boundaries.

MOD features great sounding EHX Vibrato, Flanger, Chorus or Phaser. The Depth knob lets you set the amount of the effect while Feedback controls the resonance of the Flanger and Phaser.

TREM delivers tremolo, an effect that modulates the volume of your signal. The Depth control sets tremolo intensity.

PAN modulates between left and right in stereo operation. In mono operation the PAN section acts as another tremolo section, but with the wave shapes all inverted!

Each section also features a choice of four LFO shape options: rising sawtooth, triangle, falling sawtooth or square wave. They affect the way the modulation transitions and provide advanced creative control over the specific section as well as the way they interact with each other.

It appears the MOD REX can deliver virtually any polyrhythmic possibilities.

Its TEMPO component gives you nine note-length choices for each of the four modulation sections. They are independently selectable in increments starting at a whole note and ranging thru subdivisions that go up to a 16th note. In addition, any of the sections can be bypassed.

The MOD REX’s tempo (displayed as beats per minute or BPM) is adjustable with the Tempo knob, Tap Tempo footswitch or by using an expression pedal into its EXP input. It can also be synced to an external device with MIDI Clock or an external pulse clock.