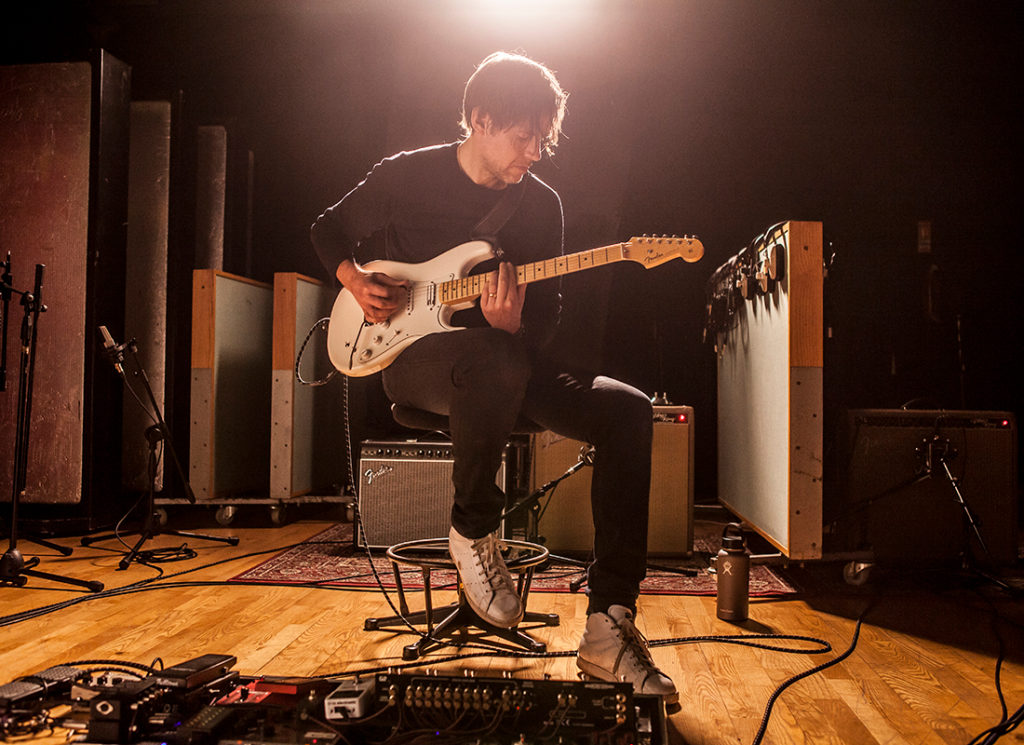 Twenty years after its release, Radioheads OK Computer stands as a landmark moment in the history of contemporary music, combining technological innovation with intense feelings of isolation and despair to perfectly bookend one of the most tumultuous decades of the century. Fusing electronic elements with the band’s pre-existing alt-rock sound.

Coincidentally to coincide with this landmark in music history, Fender has released an Ed O’Brien EOB Sustainer Stratocaster Guitar.

The Radiohead guitarist has played a Stratocaster since he first picked up a Squier model in 1986, and his main instrument since 1996 was actually an Eric Clapton Strat. So, it was pretty typical to see O’Brien with a Stratocaster in his hands while on stage.

But when his band began to trend away from their typical rock sound towards more electronic music with the album Kid A in 2000, O’Brien found himself at a crossroads with his six-stringed friend.

“Guitars were sort-of being damned and keyboards were being bought and played,” O’Brien noted. “I thought, ‘What am I going to do here? How can I use a guitar but make it not necessarily sound like a traditional guitar?’”

After ruminating on this issue, O’Brien and his guitar tech, Peter “Plank” Clements, decided to install a Sustainer unit that gave him the ability to sustain one or many notes, essentially making it an entirely new instrument altogether when engaged.

Since then, the modified Clapton Strat has been a key piece of O’Brien’s arsenal, as it helped shaped the sounds of subsequent albums like In Rainbows, Hail to the Thief and The King of Limbs and inspired what is now known as the Ed O’Brien Sustainer Stratocaster.

Ed has kitted his Strat out with an intriguing combo of pickups: a Seymour Duncan JB Jr humbucker in the bridge, Texas Special single coil in the middle and Fernandes Sustainer in the neck, which is where the model gets its name.

Control over the Sustainer’s infinite sustain comes via an on/off switch, intensity knob and three-position switch, to adjust between fundamental-only, harmonic-only or blend modes.

Ed’s model is also notable for eschewing the any form of signature on the instrument, instead opting for a custom ‘Flower of Life’ engraved neck plate.

This is surely the most intriguing signature Strat Fender has produced for some time, and more importantly, it’s the first piece of Radiohead signature gear ever.