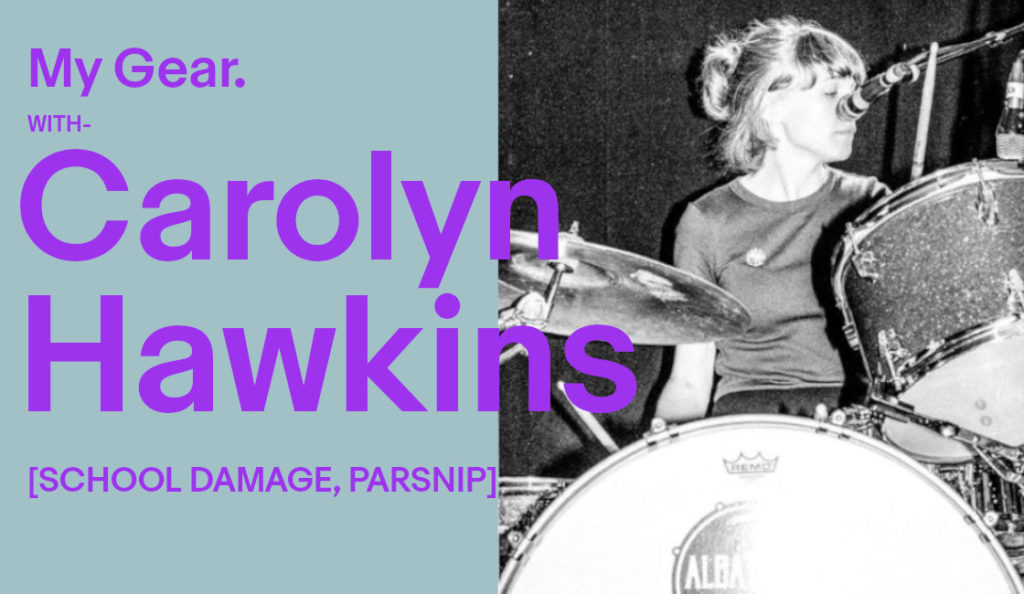 Carolyn Hawkins is a Melbourne-based musician that plays in local pop bands School Damage and Parsnip. Carolyn was kind enough to catch up with Noisegate and run the My Gear gauntlet…

I play in two bands – School Damage and Parsnip. In School Damage I play a Roland SA09 synthesiser. To be honest, I don’t get particularly nerdy about these kinds of things, but I love this synth. It makes sense to me, isn’t too big or too small, has little rainbow coloured keys and a nice warm sound which for some reason reminds me of old episodes of Play School. It’s a good reliable friend to have on stage. In Parsnip I play drums – an old Pearl Export kit that I’ve had since I was 14, which is in surprisingly good condition considering what it has been through! I always have tried to use as few ‘bits’ as possible when playing drums – I don’t use a crash and up until recently had no mounted toms. I think this comes from a combination of laziness when carting drums around, as well as a teenage obsession with Meg White, Moe Tucker and Peggy O’Neill from The Gories. But I’ve always preferred things to be simpler with any creative project – too many options complicates things, and I always find the result is more interesting when you place stricter parameters on yourself.

They’re pretty similar! I always think recording is a good opportunity to put things together in a way that would never be possible live… but those extra overdubs never seem to be in the keyboard or drums department, except with the addition of maybe some extra percussion.

Not particularly. I play on other peoples’ drumkits all the time, and occasionally I will end up borrowing other peoples’ keyboards. I think that the uniqueness of my ‘sound’ comes from the way I play, not the gear I’m playing.

My mum used to keep a ‘percussion box’ at home and I do remember playing with ‘shakers’ (I think it was a plastic Maggi chicken stock container filled with rice) along with my dad playing guitar when I was really young. For most of my childhood and teenage years I mainly played piano.

It’s not so much a matter of owning as having the right space – I’d love to own a piano again, I miss it so much.