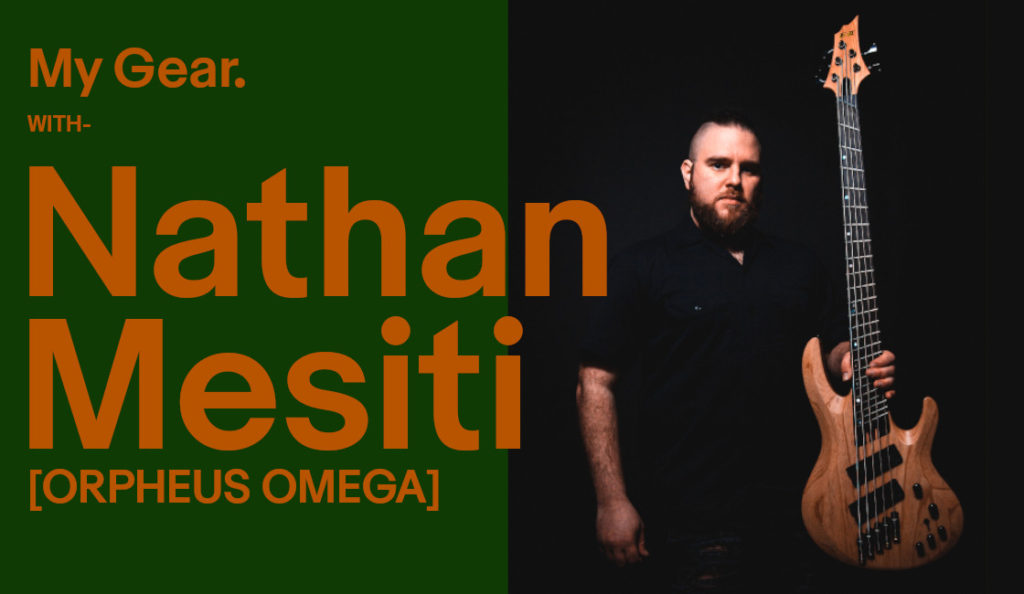 Nathan Mesiti is the bass player for Melbourne metal band Orpheus Omega. As the band soon embarks on a national tour with tech death legends Psycroptic, we thought we’d pick Nathan’s brain on his rig and other projects.

]What is your current live rig? Does it differ from your studio setup?

When playing live I prefer reliability, simplicity and portability. To that end, I have a Line 6 Helix in a rack paired with their fantastic G50 wireless system that I’ve had for 6 or 7 years and use a custom built T4AF cable for transparent low end response. Like the rest of the band, I don’t have any stage volume so all my monitoring is done on a JTS in ear system and Japanese special edition Shure 535 IEMs.

When it comes to strings I tend to float around a bit, though I end up hovering around Elixr and D’addario Pro Steels (.130) for live use. Often times I alternate between using picks or not, honestly I like both approaches. When using picks though I like firm nylons that have a bit of give in them, they act like a natural compressor in a way. Keeping everything safe is a SKB rack case for the backline and the dual instrument case from Enki.

In the studio things are very different. I’ll typically use a blend of all sorts of stuff to get my recorded tone; a Countryman DI, Warm Audio Tone Beast preamplifier, a mixture between Darkglass B7K, Sansamp PSA and the venerable Empirical Labs Distressor. Again I’ll typically use D’addario Pro Steels most of the time however for tunings lower than standard 5 string I switch to Kalium Hybrids (.142 multiscale set).

What piece of gear is absolutely integral to your sound and you can’t live without?

You may have noticed I didn’t touch on instruments in the above, I need a reliable, versatile instrument that covers a wide gamut of tones and is geared to play as good as it looks. I’ve been playing guitar and bass for a very long time and have tried many, MANY instruments, going as far to completely customise my previous live bass to a point of unrecognition and it was still limited in tonal palette and build quality.

ESP Guitars Australia introduced me to their ESP LTD B1005MS and since the day I first played it I was a little sad as my search for MY instrument had ended. The thing is an absolute beast! It’s only excelled by the EII BTL5-MS that the guys were able to get in from Japan and, damn. This bass gives me all the things I didn’t know I wanted! So the thing that is essential to me is my relationship with ESP Australia, they know my tastes better than I do apparently!

Yes, definitely! If I don’t have to fight the instrument to employ my technique then I’m inspired to write without compromise. In turn, what I end up with informs the tones I might require and the instrument should be able to provide those tones without too much screwing around. The two basses I have are equipped with different electronics, however they are both uniform in their ergonomics and have the ability to serve up variations of each other’s tones which means I can simply focus on enjoying the songwriting and tracking experience.

Is there a piece of gear that you’d never part ways with?

I’d be repeating myself if I went with what I’ve inferred thus far as far as my instrument selection is concerned, so I’ll go with a different interpretation of the question. I’d never part ways with my lust for playing bass. At heart I’m a guitarist, but there’s something primal about bass. You might not always consciously hear it but you’ll always feel it. I don’t care if anyone hears what I play, I want to make them feel and make their bodies vibrate evocatively. That is the appeal and essence of modern guitar based music and I love playing the Pied Piper, so to speak.

Nope, if I did then I wouldn’t have learned something or wouldn’t have progressed in some way. If I get rid of something and I find that it was in error, I’ll do something about it. Otherwise it’s gone for a reason.

A lot of hard work! In addition to my participation in Orpheus Omega, I’m currently composing a solo project called Pirouette, writing a web series on music theory and studio practices which I hope to start filming within the next year. Lastly, I’m also filming a bunch of play-throughs and covers of songs reimagined in different keys and styles as an exploration of music. There are tons of other things in the works but if I think about them too hard I’ll likely self-combust. TLDR: have a heck ton of fun!